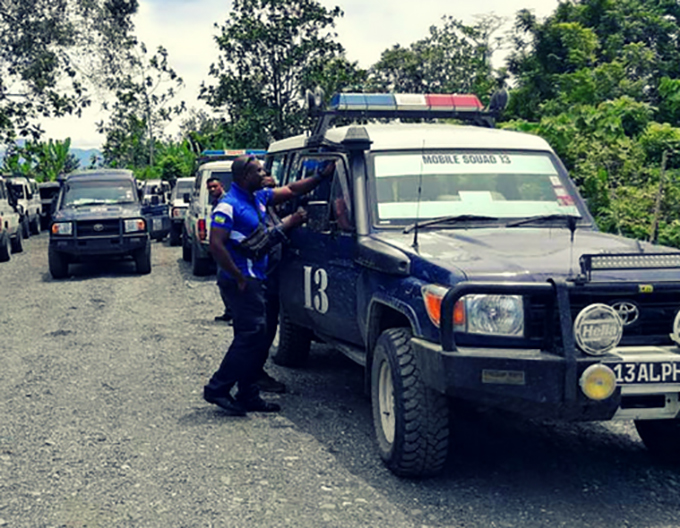 One of the gang members is lucky to be alive and is being treated at the Angau Memorial Hospital following a shoot-out with police at Downtown Lae yesterday morning.

Franco Nebas and Bradley Mariori report that the wounded included a police officer who suffered pellet wounds and the Chinese owner of the shop during the attempted hold-up at the city’s shopping centre.

Wagambie said that in the running gun battle, police killed three armed men and wounded one on the left leg.

“A bullet penetrated the windscreen of a pursuing police vehicle and wednt out the back window, while another bullet hit the roof of the vehicle,” she reported.

“A [policeman] on board sustained pellet wounds to his left arm.

“Police could not immediately open fire for fear of injuring bystanders.”

Five armed men
Chief Superintendent Wagambie said the robbery took place about 9.30am when five armed men held up one of the owners of an Asian-owned shop at Downtown Lae, the Post-Courier said.

A police traffic unit on patrol near the scene was alerted when a shot was fired by the criminals at the security guards while the robbery was in progress.

The traffic unit alerted other units to block off escape routes but the criminals managed to drive through the road blocks, firing at the police while travelling at high speed, the Post-Courier said.

Wagambie said that a police vehicle in pursuit was shot at, the bullet penetrated the windscreen and wounded a police officer.

“Police could not return fire immediately because of the large number of people walking on the road as they have been instructed not to endanger the lives of public in such instances,” he said.

Meanwhile the escaping suspects abandoned the vehicle at Busurum Compound and escaped on foot while still firing at the police.

Wagambie said a lone special response unit member who sighted the suspects at the back of Malahang Technical College was fired upon and was forced to engage in a shoot-out with the four suspects.

He said from the shoot-out they were pushed further into the area between Sipaia and Hanta Compound.

Factory and home-made guns
Wagambie said they managed to retrieve two factory-made guns and a home-made gun and live ammunition in the vehicle used in the robbery.

“We believe there was also a high-powered rifle used, judging from the distance and impact the police vehicle received when fired upon by the suspects.

“I am warning criminal gangs in Lae, not to try such daring robberies. The response time for police now is fast. The criminals were quite daring to shoot at police, not only in one instance, but on more than seven encounters with police on vehicle pursuits and on foot.

“I could have lost a couple of good policemen … but thank God for his protection.

“A lot of members and the public could have been injured in the reckless shooting carried out by the escaping gang. Our police investigators are still working on the case.

“I lastly thank all of the police personnel in Lae who all did their part by backing up each other,” Wagambie said.

The Post-Courier reports that in a related incident, quick intervention by police stopped another attempted robbery near Kumalu wet crossing.

Gunshots were exchanged between police and the criminals, Bulolo police station commander Leo Kaikas said that the suspects were eventually caught arrested and locked up at Mumeng police station.