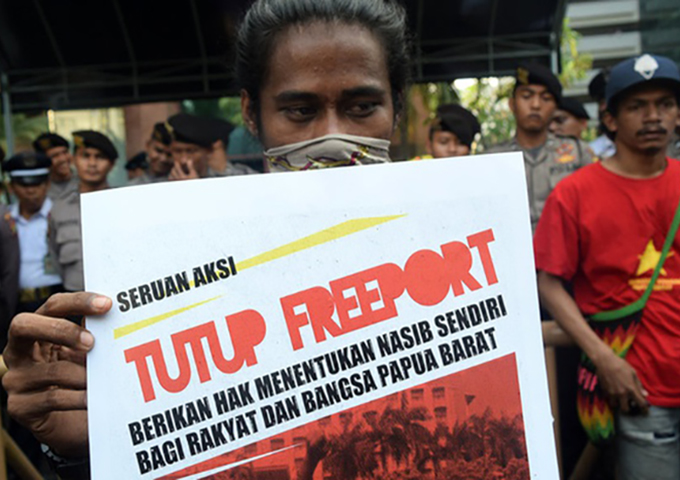 By Tony Firman in Jakarta

Calls for West Papuan self-determination were prominent during a demonstration in front of the offices of PT Freeport Indonesia in the Kuningan area of South Jakarta at the start of Easter.

The action was held by about 70 protesters from the Papuan Student Alliance (AMP) and the Indonesian People’s Front for West Papua (FRI-WP) who held the demonstration last Thursday to demand the closure of the Freeport copper and gold mine in Papua.

FRI-WP spokesperson Surya Anta said that the international community must take a position on the forced incorporation of West Papua into the Unitary State of the Republic of Indonesia (NKRI).

“Since May 1, 1963, until now, West Papua was removed from the Dutch decolonisation list without the West Papuan people’s knowledge,” said Anta.

Surya also accused Freeport of being an entry point for the colonisation of West Papua on the grounds that the first work contract between Freeport and Indonesia was signed in 1967.

Meanwhile, the Act of Free Choice (Pepera) which resulted in the incorporation of West Papua into the Indonesia was held in 1969.

Anta said that the Pepera was manipulated and undemocratic.

“Violence against the people and damage to the environment by waste tailings discarded into the Ajkwa River is a concrete form of Freeport’s colonial presence”, said Iyowau.

In a media release received by Tirto, the FRI-WP and the AMP made nine demands, three of which were:

The media release also stated that based on a report by the Papuan Institute for Human Rights Studies and Advocacy (Elsham) in 2002, numerous cases of violence had been committed by security forces in Papua.

The report noted that thousands of people had died, scores had disappeared and hundreds more had been arrested and tortured.

In addition to this, it also noted places of worship that had been burnt down, villages and other locations that had been destroyed, many of which have yet to be properly documented.

Tony Firman is a reporter for Tirto news website in Indonesia.