Lawyer Paul Paraka announces he will go to court to clear himself and claim for damages. Video: EMTV News

Embattled Papua New Guinean lawyer Paul Paraka has challenged the government with a lawsuit citing a section of the constitution never previously used for “breaching his citizen rights”, reports the PNG Post-Courier.

He has applied to the courts using a constitutional section that could imprison ministers, members of the anti-corruption Task Force Sweep, head of state agencies and banks for up to 10 years imprisonment for a breach of his rights as a citizen.

Paraka, who has made headlines since 2013 is testing Section 23 for a breach of Constitution that has never been exercised in the country since independence in 1975.

He is also seeking hundreds of millions of kina damages in the affair – known locally as as the Paraka saga – against the state, its agents and those individuals involved, reports Jeffrey Elapa. 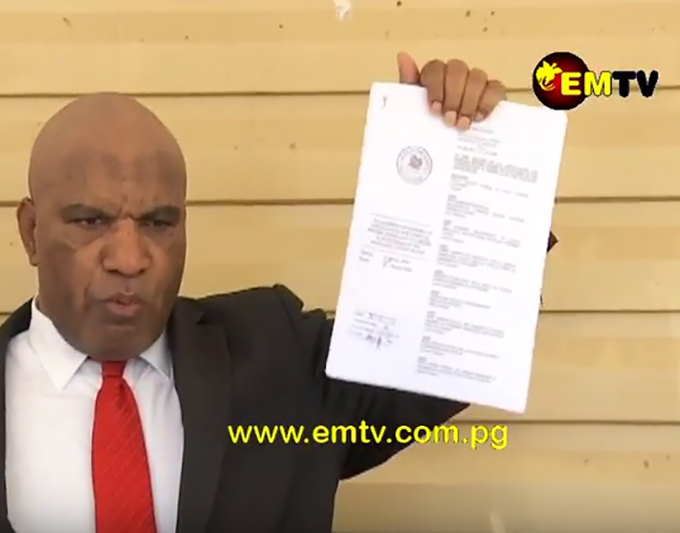 Lawyer Paul Paraka with his lawsuit documents at the weekend. Image: Screen grab from EMTV News

Paraka, who once owned one of the biggest law firms in the country prior to the controversial saga, said it was now his time to “declare war” on the state through the powers of the rule of law, seeking damages and justice from the court.

He said he was seeking orders from the court to invalidate all actions of the National Executive Council (NEC) and Task Force Sweep team and is seeking damages and compensation for the total loss of business, and seeks compensation from individual government officials and the state for almost half of the country’s annual budget allocation from a different category of damages.

During a media brief at the weekend, Paraka said he went to court to seek imprisonment terms imposed on those responsible. Section 23 deals with an abuse of the Constitution, imposing a jail term of up to 10 years.

Arrested and charged
Paraka was arrested and charged by the Task Force Sweep team in October 2013 in relation to the payment of legal costs by the state which were claimed to have been paid when there was a Supreme Court restraining order in place.

Paraka Lawyers had branches in all the 22 provinces with its headquarters occupying three floors at the Mogoru Moto Building in the capital of Port Moresby, and employed close to 2000 employees.

Paul Paraka said his company undertook over 6000 legal briefs for the state for a period of seven years from the year 2000, resulting in more than 30,000 legal invoices rendered to the state and were paid.

He said the payments, the subject of the allegations, were properly and lawfully authorised by the former Attorney-General and Solicitor-General for payment.

Paraka said the sweep team alleged foul in the payments, alleging there was a Supreme Court order.

“If there was a Supreme Court order then it should have been a breach of contempt of court offence and is not a criminal offence,” Elapa quoted Paraka as saying.

Sweep team ‘wrong’
Paraka told the Post-Courier the sweep team was wrong, there was no Supreme Court order restraining the payment and that the National Court order that directed the payment was not challenged by the state.

He said the five NEC decisions to appoint a sweep team were unlawful and unconstitutional and also did not give any specific instructions to investigate Paul Paraka Lawyers.

He said as a result he was “destroyed badly” and went through “one of the hardest times in life” and was now seeking justice to get his business and his money back and to get his name cleared.