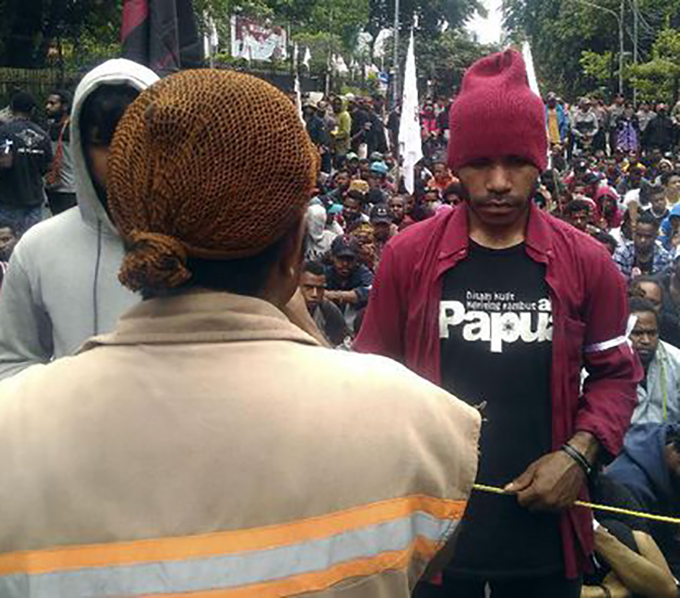 The Papua “freedom” protest near the office of LBH Jakarta on Friday. It ended without causing any incident between protesters and police. Image: Dhio Faiz/CNN Indonesia

By Dhio Faiz in Jakarta

A demonstration held in Jakarta by hundreds of students and youth from the Papua Student Alliance (AMP) and the Indonesian People’s Front for West Papua (FRI-WP) ended peacefully.

The action last Friday began at 6.30am with a march from the Jakarta Legal Aid Foundation (LBH Jakarta) offices in Central Jakarta to the offices of PT Freeport Indonesia.

The protesters only got as far as 20m, however, before they were blocked by hundreds of fully equipped police.

An advocacy team from the LBH Jakarta then asked police not to break up the demonstration by force with a guarantee that the rally would proceed peacefully.

The police then gave the protesting groups a time limit of until 11am to hold an action in front of the Megaria bus stop.

The protesters, accompanied by the LBH advocacy team, were eventually able to hold a peaceful action in front of the Megaria bus stop.

During the action they read out a six-point statement.

Close Freeport demand
First, they demanded the closure of the Freeport gold-and-copper mine in Papua and called on the government give the Papuan people the right to self-determination.

Next they asked for support for the United Liberation Movement for West Papua (ULMWP) to join the Melanesian Spearhead Group (MSG), the Pacific Islands Forum (PIF) and the United Nations.

Finally, they called for the Indonesian people to support Papua’s struggle for self-determination.

After reading out the statement and giving flowers to police as symbol of peace, the protesters began disbanding.

They also cleaned up the left over rubble from the rally then returned to the LBH Jakarta offices.

As Trump exits the White House, he leaves Trumpism behind in Australia

Disaster season is here — do you have a Resilience Action...