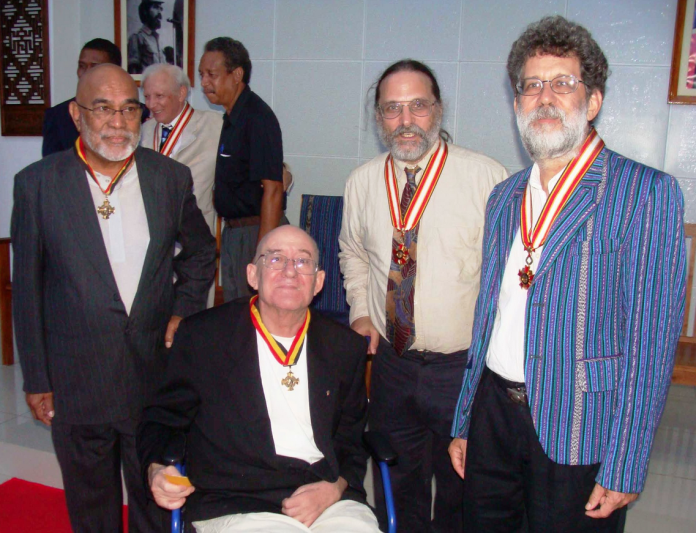 ETAN members at the time of the award of the Order of Timor-Leste, the country’s highest honour, in 2012: John M. Miller (second from right), and Charles Scheiner (right), with other special awardees Father Domingos Morato da Cunha (left) and Father Reinaldo Cardoso at the presidential ceremony. Image: ETAN

The people of the Democratic Republic of Timor-Leste will today celebrate the 42nd anniversary of their Declaration of Independence.

For the last 26 of those years, the US-based East Timor and Indonesia Action Network (ETAN) has supported their struggle for self-determination.

We stand in solidarity with all the people of Timor-Leste, and do not favour any political party or leader.

The Timorese people are currently facing a challenging time, as an opposition coalition in Parliament challenges the current government’s right to govern.

We encourage everyone to put the national interest above personal and partisan interests and to adhere to the Constitution, law, and democratic principles.

ETAN is confident in the strength of Timor-Leste’s democratic institutions and in its people’s commitment to stability, democracy and justice.

While politicians and commentators in Dili debate legal interpretations and jockey for power, the other 99 percent of the Timorese people are trying to live from day to day.

Public services
They depend on public services like education, health care and safety. Many still lack decent livelihoods and adequate food.

We encourage those in government, Parliament and political parties to design, improve, and carry out programmes to strengthen and diversify Timor-Leste’s economy, minimise poverty, decrease unemployment and malnutrition, reduce inequalities, and eliminate corruption.

Addressing these challenges will be the key to long-term stability for the country.

We also encourage every official, public servant and citizen to attend to people’s lives and families, without being distracted or paralysed by rumours, partisan maneuvering or anxiety about politics.

The President of the Republic will play a key role in resolving this political impasse, which we hope is over soon. We appreciate the calm way he is carrying out his duties under the Constitution, and we hope that he will continue to promote dialogue among political leaders, elected officials, civil society, ordinary citizens, and others to find the best solution for the entire nation.

We were encouraged by the President’s recent meeting with rural women leaders, and hope to see more women included fully in political discussions, including at the highest levels of political leadership.

Many people in Timor-Leste have traumatic memories of the brutal Indonesian occupation, as well as of the intra-Timorese conflicts of 2002 and 2006. However, people have learned from that history, as demonstrated by the largely peaceful last decade.

Although political rhetoric has sometimes been confrontational, it has not escalated to physical violence. We hope that the leaders and people of Timor-Leste continue to show their commitment to peaceful, democratic processes in a sovereign nation.

During the last 500 years, the small nation of Timor-Leste has often been oppressed, manipulated or exploited by international actors. We urge foreign powers to allow the Timorese people to work out their own problems without outside interference, even as we show our solidarity by encouraging Timor-Leste to follow a peaceful, fair and democratic path.

Yesterday, most people in the United States were celebrating Thanksgiving, a day to be grateful for the good people and things in our lives. We also recall the shameful history of European colonisation, especially the genocide of Native Americans.

ETAN also gives thanks for the sovereignty, democracy and peace that currently prevails in Timor-Leste, but we do not forget the shameful colonisation and occupation which foreign invaders, some supported by the United States government, inflicted on your people.

We recommit ourselves to improve democratic practices in the United States and to work for policies which secure human rights, end impunity, and achieve social and economic justice for both our peoples.

Timor-Leste has made more progress in 42 years than the United States has in 241, but both nations have a long way to go, and ETAN looks forward to the continuing journey

ETAN was in 2012 awarded the Order of Timor-Leste, the highest honour in the republic, for its “contribution to the liberation of the country”. Timor-Leste (East Timor) declared independence from Portugal on 28 November 1975, but was invaded by neighbouring Indonesia nine days later.