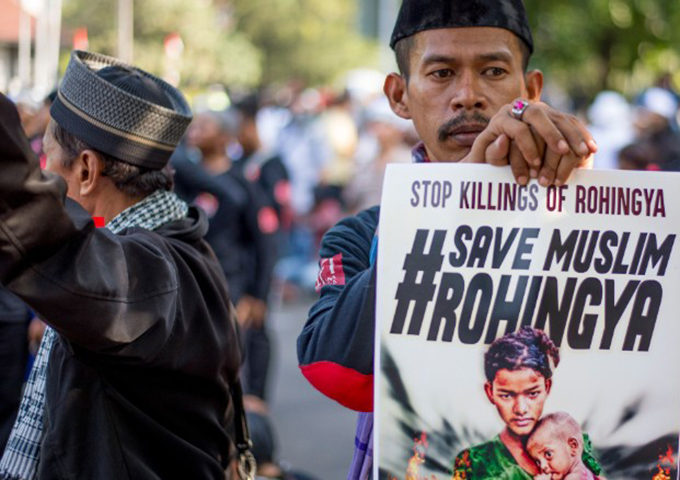 Protests against the Rohingya “genocide” have spread globally. With more than 1 million Ronhinga refugees in Bangladash, the authors argue that New Zealand needs to act now and take in more. Image: Clickittefaq

The plight of the Rohingya people has hit the international headlines again. Following the August clashes in Rakhine State between Myanmar police and army and an armed opposition group, Myanmar has seen an accelerated exodus of Rohingya people into Bangladesh.

Others are in Thailand and countries of resettlement such as New Zealand and Australia.

The most recent situation is so tragic that a recent Times Higher Education article called for some of the world’s top universities to cease educational partnerships in Myanmar until human rights abuses, especially towards the Rohingya people have ceased.

Rohingya are Muslims living in Northern Rakhine State (formerly Arakan) in Myanmar (formerly Burma) who constitute an ethnic, linguistic and religious minority. They were stripped of citizenship in 1982 and, subsequently, have been the victims of severe discrimination and persecution.

For the last few years, there has been evidence of Rohingya risking their lives and fleeing Myanmar to neighbouring Bangladesh and other countries. In August this year, with the insurgence of the Arakan Rohingya Salvation Army, the Myanmar army began a “clearance operation”, characterised as “ethnic cleansing” by the United Nations, that lasted for several weeks.

Amnesty International published a report on October 18 claiming the Myanmar Army operation which involved “widespread and unlawful killing” including rape and other sexual violence and the burning of Rohingya villages, constituted “serious human rights violations” and “crimes against humanity”.

The underlying problem for the Rohingya people is that Myanmar refuses to accept they are a recognisable ethnic minority and therefore citizens of Myanmar.

While scholars are divided over the Rohingya’s earliest settlement in Rakhine, the 2017 Advisory Commission on Rakhine State led by former United Nations (UN) Secretary-General Kofi Annan, maintained the Rohingya people are an integrated population of Muslims who have lived in Rakhine since at least the Kingdom of Mrauk U, the final Rakhine kingdom (1429-1775), and possibly 600 years earlier.

Others are 19th and 20th-century migrants from Bangladesh and West Bengal of India.

Above all, in no way ought they or anyone else be the victims of ethnic cleansing.

From the UNHCR’s perspective, there are three durable solutions for refugees: repatriation, local integration, and resettlement.

Since Bangladesh is already hosting close to a million Rohingya and is a low-middle income country, it may not be feasible to integrate all the new Rohingya who have fled Rakhine state since August.

Repatriation very slow
As for repatriation, Bangladesh and Myanmar recently agreed to form a joint working group by the end of November. However, with current documentation issues outstanding for the Rohingya, repatriation could take a very long time.

In the meantime, global leaders, including from the United States, European Union, and UN Security Council, have expressed extreme concern over the Rohingya situation. International pressure on Myanmar needs to be reinforced to expedite the repatriation.

Regarding resettlement, although Bangladesh did not ratify the 1951 Refugee Convention and 1967 Protocol, it started a third-country resettlement programme in 2006 and this continued until the Bangladeshi government suspended it in November 2010.

Because New Zealand is a refugee resettling country and some Rohingya have been successfully resettled here, New Zealand needs to urgently create provision for a special intake of Rohingya refugees, as it has done recently for the Syrian refugees.

The new government has the opportunity to demonstrate its credibility to the world by extending compassion to a community in deep crisis and thereby upholding Labour’s election slogan “Let’s do this”.

Associate Professor Sharon Harvey is head of the school of language and culture at Auckland University of Technology. Sorowar Chowdhury, a PhD student from Bangladesh, is researching the resettlement of Rohingya in New Zealand. This article has been republished by Asia Pacific Report with the permission of the authors and was originally published by The New Zealand Herald.