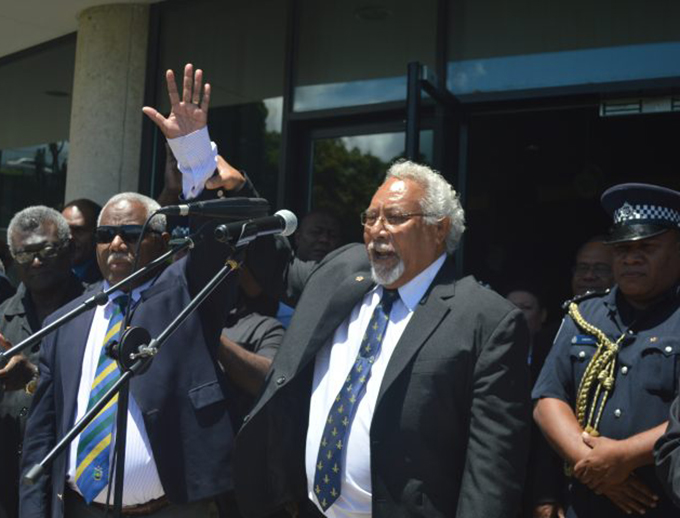 Members of Parliament today elected Rick Houenipwela, MP for Small Malaita, as Prime Minister of Solomon Islands in a 33-16 vote – and he pledged to fight corruption.

Speaking outside Parliament, Houenipwela said his priority as Prime Minister would be to maintain political stability, rectify the country’s fiscal situation and stamp out corruption.

“I stand here today as your newly elected Prime Minister,” he said with his new government flanking him. “This is an awesome responsibility which I take with sincere humility.

“I would like to thank you for your prayers and your support . . . and for the citizens for maintaining peace and order.

“The road ahead is challenging. I am fully aware of the enormity of the task before us.

“My good people, I can ensure you that our new administration will quickly put in place a strategy that entails a set of priorities deemed achievable in this short period.

Stabilisation a priority
“It is my government’s priority to stabilise our ailing fiscal situation. It is a priority to immediately address the cash-flow situation, to make sure there is fiscal discipline.”

He said his officials had already identified key areas of prioritisation in the short-term.

“Given the limited time frame we will concentrate on those infrastructure programs that are considered achievable in the period, projects that will resuscitate the government’s finances and the economy in general.”

Prime Minister-elect Hou also highlighted the reopening of closed health clinics and the submarine cable as key priorities. He also spent much of his speech addressing the public backlash over the anti-corruption bill.

“Corruption has caused inefficiencies in government operations (and) it has undermined public trust in government,” he said.

“It has robbed vital resources from our schools and hospitals. I can guarantee our administration will deliver this important legislation and we are committed its implementation before the end of the 10th Parliament.”

“In conclusion, I call on all Solomon Islanders to embrace peace and national unity. I call on all members of Parliament to work together in governing our beloved country. We can move the country forward if we put our differences aside and work towards the national interests.”

Experienced record
Houenipwela is a seven-year member of Parliament who has been governor of the Central Bank, minister of Finance and Treasury and chairman of the Public Accounts Committee.

Prior to entering Parliament, Houenipwela worked for the World Bank in the United States where he was a senior advisor to the executive director. He resigned from the World Bank to contest the election for the Small Malaita Constituency in August 2010.