By Godwin Ligo in Port Vila

The Vanuatu Ambassador to Brussels, Roy Mickey Joy, says the Melanesian Spearhead Group  is too politicised, has lost its Melanesian integrity and what it stood for.

Joy made this statement to Daily Post when asked if he was still interested in the possibility of becoming the next director-general of the Melanesian regional institution, if the upcoming MSG leaders meeting in Suva decides to re-advertise the post.

“Honestly, I am no longer interested,” was his simple and direct answer.

Asked to elaborate he said, “because the MSG has been too politicised by the member leaders and the MSG has tarnished its integrity.

“There are a lot questions being asked abroad by international organisations about the image of the MSG in Melanesia and the Pacific region.”

Joy was the Vanuatu candidate for the MSG top post when it became vacant.

The Vanuatu Prime Minister, Charlot Salwai, wrote a letter to the MSG chair, who is the Solomon Islands Prime Minister Manasseh Sogovare, advising him of the Vanuatu candidate.

Already ‘appointed’
But shortly after, the member countries learnt that the MSG chair had already appointed Fiji’s candidate to the top post.

The Daily Post understands that the Fiji’s candidate arrived in Port Vila to take up his post.

In the meantime, the Daily Post also understands that the pending issue of the director-general of the Melanesian Spearhead Group (MSG) will be on top of the agenda in the upcoming MSG leaders meeting in Fiji.

“Whatever the outcome, I am no longer interested because the MSG leaders have politicised the Melanesian institution and likewise with the MSG Secretariat in Port Vila,” Ambassador Joy said.

“Transparency and guiding rules have not been followed when the MSG is supposed to be an independent and impartial and transparent organisation.

“Its influence is at stake. Organisations in the region and abroad are watching and questioning what’s going on in the MSG and the leadership of the MSG.

“As a long serving ambassador abroad, I am calling on the MSG leaders to come to a drawing board as to how far we have come and where we are going,” said Joy.

Second mandate
He said his second mandate as the Vanuatu Ambassador to Brussels would end in March 2017.

“If the offer is made to me by the Vanuatu government for a third term in Brussels, I will take it because I want to stand for my country.

“I have always been patriotic regionally and abroad about upholding the image of my country Vanuatu abroad,” Joy said.

Meanwhile, the Committee of Ambassadors of the Africa Caribbean Pacific (ACP) Secretariat in Brussels is meeting next week to prepare a dossier on West Papua for eventual submission to the Council of Ministers of the European Parliament four months away in October.

This was confirmed Ambassador Joy, during his accreditation to the Food and Agriculture Organisation (FAO), International Fund for Agriculture Development (IFAD) and World Food Programme (WFP) in Port Vila last Friday.

The Ambassador took the opportunity to assure the Minister of Foreign Affairs, Bruno Leingkone, that the workload on West Papua is now on the shoulders of Vanuatu’s special representative to ACP, young and energetic MP Marco Mahe.

Godwin Ligo is a senior journalist with the Vanuatu Daily Post. 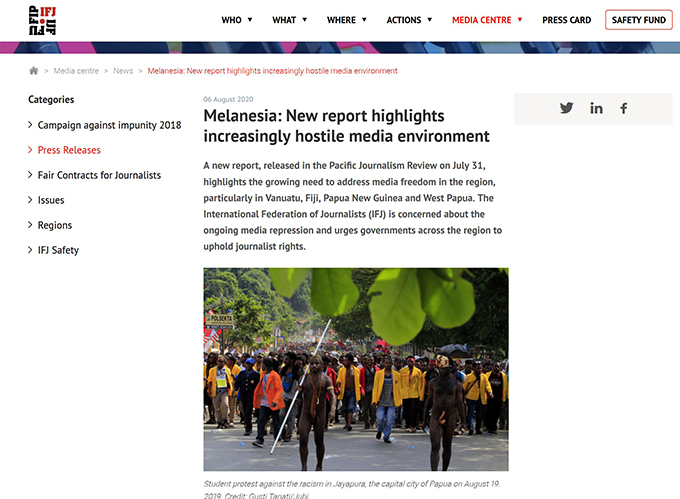