Ten people lost their lives in Fiji’s Western Division when severe tropical cyclone Winston swept through the country at the weekend leaving a trail of devastation.

And a popular century old iconic tree in the heart of the capital Suva has been destroyed.

Seven of the deceased were from Ra; one from Nadi and a 48-year-old from Lautoka.

Two of the seven people who lost their lives in Ra drowned during storm surges at the height of TC Winston – one of them was a 97-year-old.

Of those deaths in Ra, four were hit by flying debris, while one died after a house collapsed.

Three people lost their lives in Nadi – one of whom died during medical evacuation from Ra.

7 fishermen missing
Tavaga also confirmed that seven fishermen from the Yasawas were missing at sea.

They had gone out to sea on Friday and had not been heard from since, officials told FBC News.

There are currently 4184 evacuees.

Authorities are waiting for water levels to recede before any contact can be made.

DISMAC has also confirmed five deaths yesterday – one from Koro Island, two from Ovalau, one from Qelekuro in Tailevu and one from Nasau in Ra, with the total toll apparently reaching 15.

Fiji One News reports that the famous ivi tree that was a favourite photo shoot venue for tourists was finally destroyed by the category 5 cyclone Winston. It had survived many cyclones for decades.

Suva City Council workers yesterday cleared parts of the tree that had blocked Victoria Parade, a major link into Suva.

The ivi tree had been a popular landmark since pre-independence times and is believed to be well over a hundred years old. 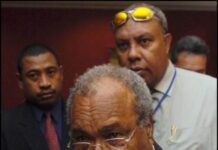