NewsroomPlus.com Contributed by Shereel Patel-Gaunavinaka, NewsRoom_Plus The nation of India represents 17.5% of the world’s population, against New Zealand’s 0.06% Yet when someone mentions Indian culture, what comes to your mind? Spicy curry, vibrant colors and Bollywood? Indian culture is more than just curry and Indian movies, it’s about art and stories passed down through generations, festivals with deep meanings. Indian culture has so much to offer but we know very little. The exhibition The Story of Rama: Indian Miniatures from the National Museum, New Delhi has just opened at the Auckland Art Gallery Toi o Tāmaki and is the the largest exhibition of historic Indian art to be shown in New Zealand to date. For New Zealand, it is a compliment to be hosting the final appearance of the world tour of this exhibition, a chance to experience ancient Indian art direct from India. Mathew Norman, Assistant Curator at Auckland Art Gallery points out that a 12th century sculpture of an Apsara (a female spirit of the clouds and waters in Hindu mythology) is the oldest work of art in the Gallery’s collection. Otherwise Matthew says the Gallery only holds a modest collection of historic Indian art. “Those works have been shown periodically in the past, and the Apsara will be shown in a space adjacent to The Story of Rama,” says Mathew. The Story of Rama is an extremely rare opportunity then, for the New Zealand public to see a large exhibition of historic Indian miniature painting. The Auckland Art Gallery Toi o Tāmaki says this showcases the important and distinctive tradition of miniature painting in India. It also presents an opportunity for visitors to the Gallery to learn about the Ramayana, regarded as one of the great epics of world literature. The exhibition includes examples of 101 painting from 24 different regional painting traditions, ranging in date from the early 17th to the mid 19th centuries. The painting styles range from naïve folk-style painting through to refined compositions inspired by the Mughal School. When looking at the paintings you are taken back in time to how things were, the simplicity of life, how the Indian culture is entwined with the stories of their deities.

One of the most important stories in Indian culture, Ramayana , or journey of Rama, is a tale of love, loyalty and the triumph of good over evil. It recounts the life of the hero Lord Rama, a model prince and the seventh incarnation of Lord Vishnu, whose character to the current day is admired for his honour, courage and compassion. Credited to the sage Valmiki, the story of Ramayana dates back as far as the 5th to 4th centuries BC, and is the earliest and most significant work composed in Sanskrit. The exhibition is arranged to reflect the traditional division of the story into seven kandas (cantos or books), which follow the life of Rama from his birth as a prince of Koshala to his marriage to the beautiful Sita, their exile from Koshala, the kidnapping of Sita by Ravana, and her rescue by Rama with the help of his brother Lakshmana and Lord Hanuman, the monkey general. At the end of the sixth kandas, Rama and Sita return home triumphant to a joyous celebration, lit by thousands of beautiful oil lanterns. For many, Rama and Sita’s homecoming marks the origin of Diwali, the festival of lights. Diwali has been gaining greater prominence as an important festival in New Zealand. This is a partial recognition of the numbers of the New Zealand population of Indian descent which at the time of the 2013 Census was sitting at 155,178, with the Auckland region being home to 68.5 percent. The Festival of Lights or Diwali is an annual event in New Zealand  and will be celebrated next month, from the 17-18 October in Auckland and on the 26 of October in Wellington. It is a fun filled festival for the whole family with international and local stage performances, craft and retail stalls, presentations, workshops and diverse, authentic Indian cuisine. Whereas the experience of Diwali certainly serves to expose Indian culture to more and more people, it really does take an exhibition like The Story of Rama to open the door to the richness of the Indian tradition of stories that are never-ending. ADDITIONAL INFORMATION –]]> 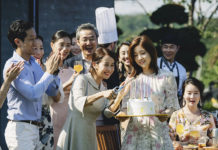 Climate change research aims to give back Pacific’s ‘sustainable voice’