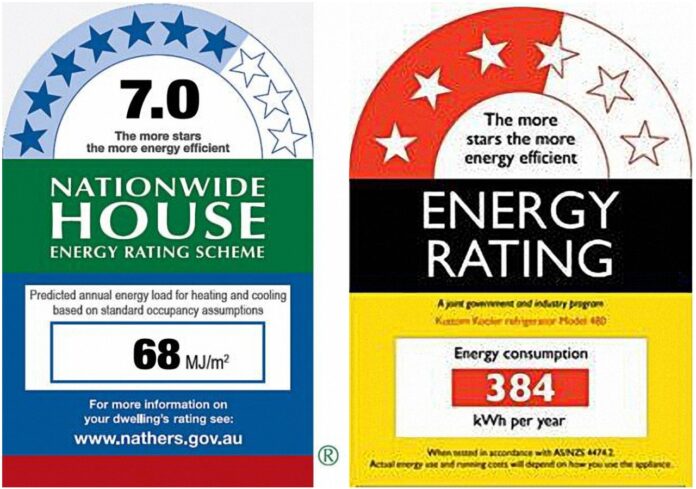 Source: The Conversation (Au and NZ) – By Georgia Warren-Myers, Senior Lecturer in Property, University of Melbourne

Australia’s competitive volume housing construction sector is busy spruiking various upgrades and packages to sell the appealing notions of lifestyle and luxury on a budget. Along with sparkling stone benchtops and alfresco dining areas, some builders use sustainability and energy-efficiency features to entice customers. However, our recent study found the ways some volume builders promote energy efficiency and sustainability could mislead consumers and breach the Australian Consumer Law.

Stars are a simple shorthand or “measuring tape” to help consumers to quickly and easily identify the energy efficiency of each home, and to compare one house to another. Under the Nationwide House Energy Rating Scheme (NatHERS) the best rating is ten stars. Six stars is the regulatory minimum required of most new homes in Australia.

Read more: Australia’s still building 4 in every 5 new houses to no more than the minimum energy standard

A NatHERS rating is the most common method of demonstrating compliance with energy-efficiency standards. The ten-star NatHERS scale differs from many other commonly used star rating schemes, such as Green Star, where five or six stars indicate best, not minimum, performance. This is where the potential for consumers to be misled begins.

Most new home buyers are not well versed in building design or energy efficiency regulations. They tend to rely on industry experts such as builders when making such decisions about their new home.

We wanted to find out how Australia’s volume home builders communicated to consumers about energy ratings. Were they meeting their obligations under the Australian Consumer Law?

What does the law say?

A person must not, in trade or commerce, engage in conduct that is misleading or deceptive or is likely to mislead or deceive.

As the Australian Competition and Consumer Commission’s guide on green marketing points out, when making statements about green initiatives the overall impression to a typical audience is most important. It cautions businesses:

Our study examined the websites of Australia’s largest volume home builders to see how they explained the energy efficiency of their homes to potential buyers. We found logos and language that could mislead consumers about the energy-efficiency performance of those homes.

No websites we examined actually used the official NatHERS logo. Instead, some builders had created their own version of a six-star logo. Each example we found showed a grouping of six stars only, suggesting a rating of six out of six was the best rating.

Buyers are likely to interpret these logos as meaning six stars is superior or excellent performance, rather than the minimum performance benchmark that applies to all new homes. One logo went further, claiming six-star “sustainability” – when a NatHERS rating only measures thermal energy efficiency.

We also found statements on websites that inaccurately equated a six-star rating with a high energy performance. The website of one builder suggested six stars was a “superior” measure of service or quality. Another linked six stars with broader sustainability performance and commitment (not just thermal energy efficiency). One volume builder even described a six-star rating as an “award”!

In each case these statements could easily be misinterpreted as meaning the home was an exceptional product offering, rather than meeting the basic industry standard.

These volume home builder websites use logos and language that imply a high level of energy efficiency or a superior product offering, rather than simply indicating compliance with the minimum regulatory standard that applies to all new homes. As a result, home buyers are likely to be misled about the energy efficiency of these new homes.

Effect matters, regardless of intent

Our research does not seek to suggest volume home builders have deliberately set out to mislead potential buyers. However, Section 18(1) is concerned with effect rather than intent. While builders may not intend to mislead buyers, this may be an outcome of current advertising practices.

Therefore, as we point out to both volume home builders and new home buyers, any information about house energy ratings needs to be clear and accurate. It should reinforce that six stars is the minimum standard that applies, not the best.

Energy-efficiency measures such as star ratings for new homes are an important part of efforts to reduce Australia’s energy demand and minimise contributions to climate change. Misleading statements about house energy ratings not only risk breaching the Australian Consumer Law, but also weaken community trust in star ratings and in the information the home-building industry provides. It’s time to review the spruiking.