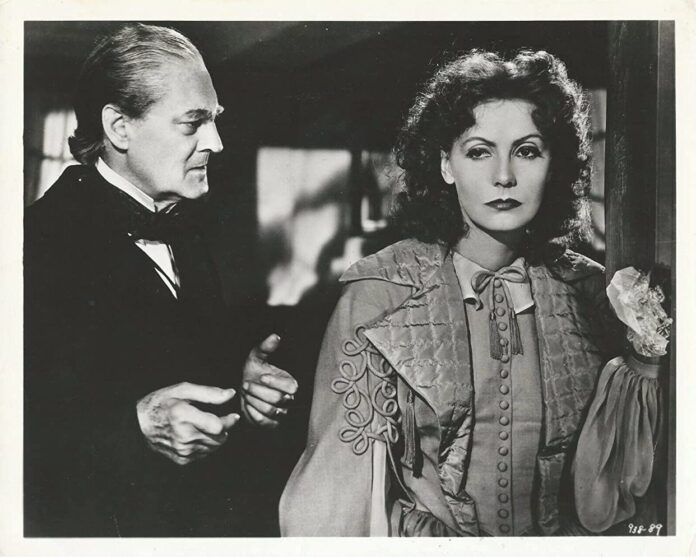 Movie characters – like Greek heroes – are typically faster, stronger, braver and better looking than those of us in the audience who stare on in admiration. We watch as obstacles are overcome and goals achieved, attracted by the beauty and goodness in the cinematic story world.

But, should movie characters cough as they go about their extraordinary business, you can just about guarantee they will be dead before the end of the film. The screen cough, it seems, is fatal.

In the time of COVID-19, the screen cough takes on new significance. A low budget Canadian film made early this year is thought to be the first movie about coronavirus. It features a woman getting into a lift with others and the confrontations that ensue when she starts coughing.

Read more: Scary red or icky green? We can’t say what colour coronavirus is and dressing it up might feed fears

More than a tickle

From Marguerite Gauthier (played by Greta Garbo) in the 1936 movie Camille, to Boris Shcherbina (Stellan Skarsgard) in the HBO series Chernobyl (2019), coughing on screen has deadly significance.

In the dramatic opening moments of the first episode of The Crown (2016), there is only darkness and silence … until we hear the sound of a dreadful hacking cough. Fade in to reveal King George V (Jared Harris, who also coughed in Chernobyl) in his bathroom, looking concerned. He coughs some more. Terribly sorry, your Majesty, but you’ll be dead before the end of Episode 2.

Nicole Kidman, as Satine in Baz Luhrmann’s Moulin Rouge (2001) coughs on page 35 of the screenplay. Well, she has been singing and dancing vigorously in front of Christian (Ewen McGregor) in a steamy Parisian nightclub, so perhaps it’s just a question of fitness.

“Oh, these silly costumes” she says to those gathered around her, in an attempt to explain her breathlessness. But it’s neither the clothes nor the exertion: the screen cough means she is doomed to die 83 pages later, in her lover’s arms, afflicted like Garbo’s Marguerite with tuberculosis.

The sound of a cough opens Steven Soderbergh’s 2011 film Contagion, currently one of the world’s top streaming titles.

That cough belongs to Beth Emhoff (Gwyneth Paltrow) and, sure enough, she doesn’t make it very far into the movie. The virus that takes her to an early screen grave also infects Erin Mears (Kate Winslet) who coughs while on the phone to her boss (Laurence Fishbourne). His look is enough to confirm our fears and within a few scenes her lifeless form is being zipped into a body bag.

Many others have succumbed to the incurable screen cough of death, including even Yoda in Return of the Jedi (1983). To be fair, Yoda is 900 years old and knows he’s about to die. “Soon,” he splutters to Luke Skywalker, “I will rest. Yes, forever sleep” and promptly becomes one with the Force.

The screen cough is a phenomenon so well known by screenwriters that it’s become the subject of parody. Mitchell & Webb played with the trope in a BBC sketch named The Man Who Has A Cough And It’s Just A Cough And He’s Fine in 2008.

Alec Baldwin went one step further on Saturday Night Live in 2009 with an actors studio-style breakdown on how to sell your impending death effectively, starting with the fateful cough. The sketch – First Coughs: Mastering the Art of Foreshadowing Your Character’s Death – starts with step one: say “it’s only a cold”. Sometime later, the actor should emphatically state, “I don’t need any damn doctors!”. The final step is complex but mightily effective: “cough into a handkerchief, notice that there’s blood on it, look around nervously, then quickly shove it back in your pocket and hurry on your way”.

When I see these send-ups, of course I laugh, but with a tinge of resentment: parody is both celebration and humiliation. I can’t help but think that I’ll never again be able to see the beautiful & dramatic subtlety of a well placed screen cough without a snigger.

The art of signalling a future event in narration is a literary device apparent in the earliest ancient stories. It comes in many forms, from prophesy, dreams and omens to portents and apprehensions.

In the 4000-year-old poetic work, Epic of Gilgamesh, dreams predict the hero’s victorious battle with a great bull as well as his friend’s tragic death. Early in Sophocles’s play Oedipus Rex, a blind prophet riddles the truth of the story to come. The Bible is full of prophecy, none more memorable than Jesus’s prediction in The Gospel of John that one of his disciples would betray him.

Driven by our need for certainty, we value knowing what may lie ahead. Facing open time, with all its possibilities, takes courage and – from budgets to prayers – we seek to gain a sense of control over our future. It’s unsurprising that we find pleasure in stories where foreshadowing signals what will happen, from storytellers who sneak the future into the present.

The ability to manipulate the direction of time is fundamental to sophisticated narration. Merely explaining what happens next – the way time works in real life – is not enough when it comes to entertainment. There’s nothing more tedious than a story that proceeds along the lines of “this happens, then this, then this” and so on. Novelist E. M. Forster – who wrote A Room with a View, Howard’s End and A Passage to India – famously decreed that this kind of primitive narration causes listeners to fall asleep or rise up to kill the storyteller.

To avoid such a fate, skilled narrators use foreshadowing to create tension, build anticipation and hook the audience into a belief that there’s something of interest to follow. We instinctively know that everything in a story has been planned and the author has determined the destiny of each character, so we intuitively look for the signs and the structures that will take us towards closure, including moments of foreshadowing.

They can be subtle and poetic (a storm or a shooting star), psychological (a character worrying about something that has yet to be revealed) or concrete, like the appearance of a deadly weapon. But common to all these forms of foreshadowing is that we see them as the future pointing backwards. The grief to come has caused the present storm; bad news the anxiety; the body at the end of the film requires the gun at the start.

Alfred Hitchcock knew only too well the importance of being able to play with time. Imagine four people seated at a table having a conversation about football for five minutes, when suddenly a bomb goes off. That’s five minutes of boredom followed by a surprise. What’s in it for the audience, says Hitchcock, is only “ten seconds of shock”. But take the same scene and show the audience the bomb at the beginning, and the conversation about football becomes an exercise in suspense and high anxiety.

Orson Welles plays out this idea in the famous opening scene of Touch of Evil (1958), showing us a bomb set to go off in three minutes. It’s then hidden in the boot of a car that moves erratically through a busy crowd. We hold our breath wondering where the car will be when the time is up.

The cough is a timebomb

The screen cough is also the ticking of a bomb, leaving both character and audience unsure when it will go off. One of the most dramatic screen coughs occurs in Three Billboards Outside Ebbing, Missouri (2017). It’s revealed early in the movie that police chief Willoughby (Woody Harrelson) has terminal pancreatic cancer, but it’s a brutal shock when he violently coughs blood over Mildred Hayes (Francis McDormand).

In a strangely poignant sequence, writer/director Martin McDonagh opts for Willoughby to take his own life rather than let the disease run its course: he knows what lies ahead after that dreadful coughing incident.

Storytellers have a delicate balancing act to maintain when it comes to foreshadowing. Too oblique or poetic and the audience struggles to see the connection between the signalling moment and the signalled event, or perhaps only recognises it retrospectively. Because the screen cough is linked to both a specific individual (the sufferer) and a specific outcome (death), it’s necessary to be subtle when using it as a narrative device.

Perhaps we are now beyond subtlety. The combination of our current hyper-vigilance of respiratory symptoms and the increasing awareness of the function of the screen cough, risks it becoming a dreadful cliche, a trope in need of a innovative makeover. Like the good guys wearing white hats in Westerns, and detectives smoking excessively in film noir, it may just be time to give the screen cough a breather.

– ref. Friday essay: coughs on film and the fine but deadly art of foreshadowing – https://theconversation.com/friday-essay-coughs-on-film-and-the-fine-but-deadly-art-of-foreshadowing-135697