Wednesday 23rd of September 2020 11:39:24 AM
Home Academic Analysis Australia starts to re-open, but the premiers have the whip hand on... 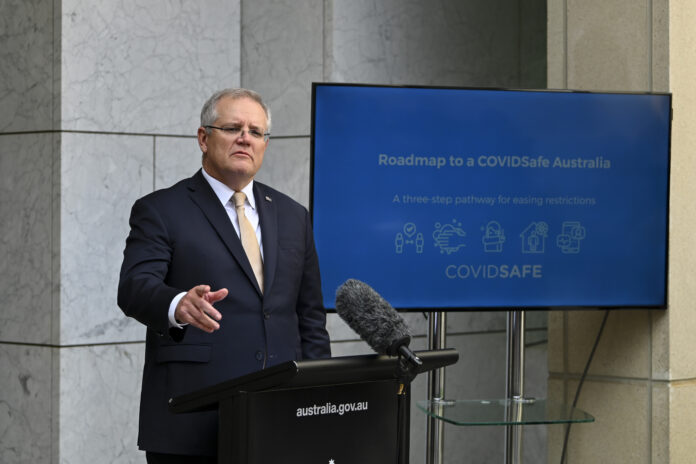 Scott Morrison has warned of a potentially rocky road as COVID restrictions are lifted to reopen the economy, saying the process must proceed even in the face of expected fresh outbreaks.

“This is a complex and very uncertain environment. But we cannot allow our fear of going backwards from stopping us from going forwards,” he said, unveiling a plan agreed by national cabinet, but to be implemented at different rates in different states and territories.

Morrison made it clear he would be opposed to reimposing restrictions once the unwinding was underway.

The aim is a “Covid-safe economy” in July. According to Treasury, 851,000 jobs would be restored in the months ahead.

The “road map” has three steps, laying down baselines for restarting activities.

In the first stage, rolled out any time from now, people can have up to five visitors to their house and gatherings of up to 10 will be allowed outside of the home.

Small restaurants and cafes can reopen, but only with up to 10 customers at a time.

Playgrounds can open, as well as libraries and community centres; outdoor bootcamps can restart and auctions will be permitted.

Local and regional travel for recreation will be allowed.

On the work front, the advice is “work from home if it works for you and your employer”, which Morrison described as “a difference in emphasis” compared with the stronger encouragement previously for people to work from home.

Under the relaxed rules, funerals can have up to 30 attendees outdoors and 20 indoors, and weddings 10 people in addition to the couple and the celebrant.

Cafes and restaurants will be able to seat up to 20 people at one time.

States and territories may allow larger numbers in some circumstances.

Some interstate recreational travel would be considered, depending on the jurisdiction.

The third stage sees gatherings up to 100 allowed and people returning to their workplaces. Food courts, cafes and restaurants will be able to operate with up to 100 people, as will saunas and bathhouses. All interstate travel will be permitted.

In this stage consideration will be given to opening bar areas. Strip clubs and brothels would remain closed.

There would be consideration in this stage of travel between Australia and New Zealand, Pacific Island travel and travel arrangements for international students.

He also said premiers and chief ministers “have asked me to stress there should be no expectation of step one starting on day one, unless they are indeed already there”.

Moving on these steps would take some preparation, he said.

Movement from one step to the next would depend on three criteria – that the medical evidence suggested further easing wouldn’t be an undue risk, widespread testing was identifying community transmission, and public health actions were able to trace cases and trap local outbreaks.

“Testing, tracing, trapping, as they were saying in the Northern Territory recently,” Morrison said.

Asked whether, when expected fresh outbreaks came, states, territories and Australians needed to hold their nerve and not snap back to tighter restrictions, Morrison replied without hesitation, “yes”.

But he also made it clear if there was a widespread outbreak the government would take the health advice.

Morrison said Australia’s health system and testing and tracing arrangements put it in a good position.

In this plan to lift restrictions, “we walk before we run. We know we need to be careful to preserve our gains”.

“Not everything will go to plan. There will be inconsistencies. States will and must move at their own pace, and will cut and paste out of this plan to suit their local circumstances. There will undoubtedly be some human error. No-one is perfect. Everyone is doing their best.”

Victorian premier Daniel Andrews, who has been the most conservative of the premiers, said he would not make announcements until next week.

He also hinted he might open schools – which in Victoria are providing distance learning to all but a few students – earlier than the current arrangement. Victoria has angered the federal government with its hard line on schools. The national health advice has been that schools can be safely open and Morrison has pushed that issue.

NSW also will not act before next week, with premier Gladys Berejiklian noting the state had already moved to lift some restrictions.

– ref. Australia starts to re-open, but the premiers have the whip hand on timing – https://theconversation.com/australia-starts-to-re-open-but-the-premiers-have-the-whip-hand-on-timing-138218

Our new model shows Australia can expect 11 tropical cyclones this...