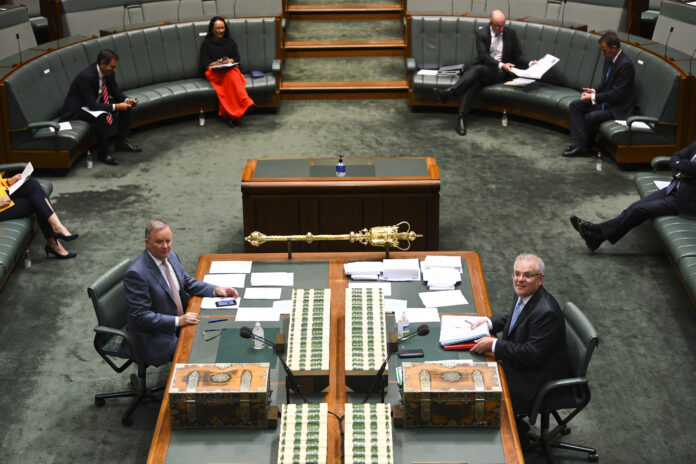 Coincidentally, as the economy takes some early steps towards reopening, parliament will meet next week for what is being billed as a “normal” sitting – though that’s a relative term these days.

The two recent one-day meetings (March 23, April 8) were entirely devoted to passing COVID rescue measures; the tone was sombre, partisanship minimal. This will be a three-day sitting (Tuesday to Thursday); announcing it last month, Scott Morrison described it as a “trial week”, with the aim of “having the parliament meet again on a regular basis”.

Labor and many commentators argued parliament should have sat all through. After all, businesses were encouraged to keep operating where they could, so why not this business house of the nation?

But at least we have a compromise. In late March, it had been intended to have no sittings until August. It now seems likely there’ll be a week or two in June before the usual winter recess.

Next week will still be a socially-distanced parliament. Only 75-77 MPs will be permitted in the House of Representatives chamber at any one time, about half the full complement.

While there’ll be more House members in Canberra, a system of revolving “pairs” will see some members in the chamber while others are not. The Senate will be slimmed down as well.

There’ll also be socially-distanced party meetings (that could be automatic in the aggro ranks of the Nationals). In recent weeks the Coalition has been having “tele-townhalls” with its members hearing briefings from Morrison, Deputy Prime Minister Michael McCormack, Treasurer Josh Frydenberg and Health Minister Greg Hunt, and given an opportunity to ask questions.

For Labor, the tactical judgment to be made will be how much to politically distance from the government.

One Labor source predicts we’ll see a “transition” week. “People say politics will have to return at some point. But people are still in the ‘can it be co-operative’ phase,” he says.

It’s a fine line. In these times, the public want their politicians to work together, to avoid unseemly brawling. The high degree of bipartisanship over COVID measures has likely been a factor in the rise in trust in government reflected in surveys, the most recent from the Australian National University on Thursday.

Nevertheless, Labor can’t afford to just be head-nodders, even in relation to pandemic measures, such as the COVIDSafe app.

The main legislation of the week will be for the app, which the opposition supports while having questions.

The Senate committee inquiring into the government’s response to the pandemic this week heard evidence about the app’s technical issues.

The government is also refusing to give a target for downloads. After suggestions a 40% download was needed for effectiveness (though it was never clear what it was 40% of) the government now says there’s no “target”. Nevertheless, more information about the efficacy of various rates of downloads is needed.

The legislation for the app has been released, and contains strong privacy protections. But already there’s pressure from some employers to be able to force workers to download it.

That is prohibited, and the government must make it very clear that leaning on employees to do so will not be tolerated. Otherwise people will lose confidence in what has the promise of being a useful tool.

Parliamentary question times next week are expected to be somewhat more combative than during the one-day sittings, but not like the shouty pre-COVID days.

Against the background of the shambles on the conservative side this week with the carry-ons by the NSW state National John Barilaro and the Liberal Andrew Constance, Anthony Albanese must decide how to pitch Labor’s use of the House to prosecute the Eden-Monaro byelection – for which Speaker Tony Smith may announce a date next week.

The infighting on the other side provides tempting material but Labor might be wise to keep to on-the-ground issues, in particular the ins and outs of the bushfire recovery.

It can leave it to the media to highlight the shenanigans. Certainly eyes will be on the demeanour of the Nationals, to see whether Barilaro’s attack on McCormack has re-ignited tensions in the federal party.

The fire recovery issue is potent in Eden-Monaro. Agriculture Minister David Littleproud has flagged an announcement in the next few days (which the government says was in the pipeline before the byelection loomed). He will also make a statement to parliament.

The government’s legislative program, apart from the app, will comprise non-controversial “rats and mice” bills. Divisive matters like the “ensuring integrity” anti-union legislation won’t be there.

Apart from the privacy legislation and bushfires, the main item on the government’s agenda will be Frydenberg’s Tuesday economic report to parliament, including the effect of easing restrictions.

Ahead of this, Friday’s Reserve Bank quarterly forecasts on economic growth, unemployment, wages and other measures for the coming two years will present a grim picture.

Meanwhile Albanese will begin setting up a major debate with the government when he delivers his fifth “vision statement”, outlining ideas for the post-Covid world.

In his speech, delivered to caucus on Monday, he’ll make it clear this will be a world in which a Labor government could not fund the sort of generous spending to which it was committed at the last election.

COVID is giving Albanese the opportunity – the cover, if you like – to complete the pivot to the more fiscally conservative position that he began to spell out in the aftermath of last year’s defeat.

He is also planning to have the party come up with a broad suite of policy ideas by the October budget. The government wants to make that budget policy-heavy; Albanese is anxious to be able to pack a punch in his reply.

The public’s attention next week, however, is likely to be less on the doings in Canberra and more on what’s happening on the ground.

Friday’s national cabinet sets parameters and stages for lifting restrictions. But how the process unfolds will differ between states; those decisions will be variously greeted with jubilation, criticism and controversy as life cranks up again but not fast enough for some.

– ref. Grattan on Friday: The delicate art of political distancing during the pandemic – https://theconversation.com/grattan-on-friday-the-delicate-art-of-political-distancing-during-the-pandemic-138127