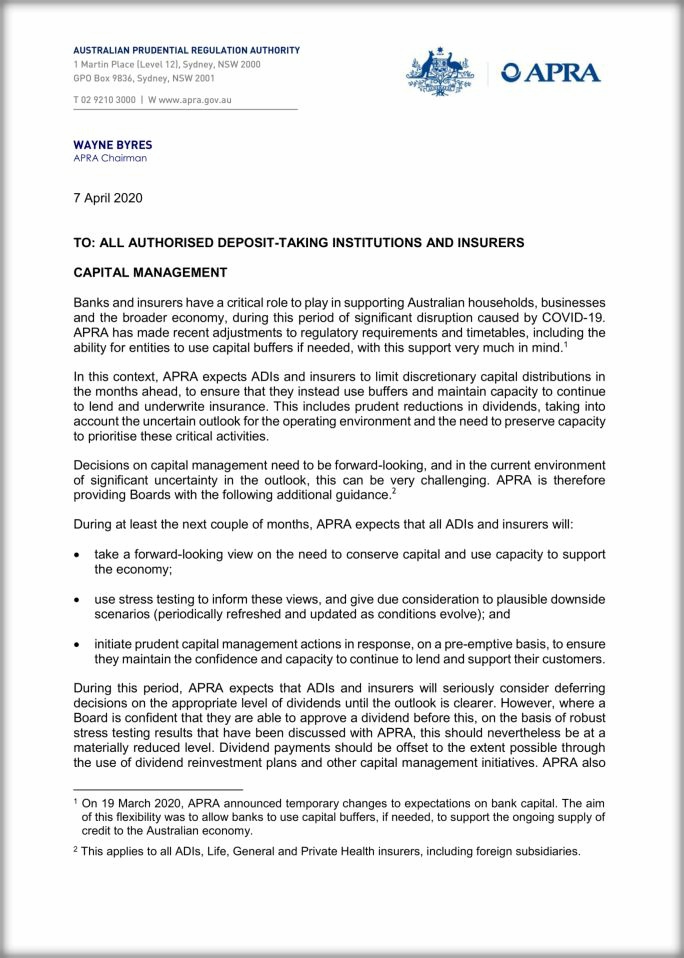 In bad news for retirees and others who depend on dividend cheques (and dividend imputation rebate cheques from the Tax Office) bank dividends have largely evaporated. But it’s not as bad as many commentators suggest, and actually good for some investors.

Westpac won’t be paying a dividend this half year. Nor will the ANZ, nor the Bank of Queensland.

The National Australia Bank will pay one, but only a third the usual size. The Commonwealth Bank’s different reporting dates mean it won’t have to make a decision until August.

The Financial Review believes the moves have taken A$9.8 billion in expected dividends and franking credits from bank shareholders to date.

The flip-side missed by many commentators and shareholders is that bank shares are worth more (maybe around $9.8 billion more) than if they had paid those dividends.

As it happens, the decisions follow pressure from the Prudential Regulation Authority which last month sent banks an unprecedented letter asking them to “seriously consider deferring decisions on the appropriate level of dividends”.

It isn’t what bank shareholders have come to expect.

The Commonwealth Bank’s dividend policy says it will aim to pay cash dividends at “strong and sustainable levels”, maximising dividend imputation cheques from the government by paying fully franked dividends.

The dividend reductions come after sharp collapses in share prices brought about by hits to current and expected future earnings and increased economic uncertainty.

But, as hard as it is to look beyond dividends, imputation cheques and the price of shares, what’s most important for the owners of shares are the earnings prospects for the banks long term. And here, as hard as it might be for some shareholders to accept, the suspension of dividends is a sensible strategy for the banks.

Cruel to be kind makes sense for banks

In making decisions about dividends in the wake of bad news, each bank had two options.

One was to keep paying dividends at previous levels.

That would have pushed the share price down further, as evidenced by the typical drop in a company’s share price after dividends have been paid.

With the funds paid out as dividends, and no longer part of the bank’s shareholders funds, each share becomes correspondingly worth less.

It also puts the bank in a weaker position to weather unexpected loan losses if the COVID-19 storm turns out to be even worse than expected.

The other option was to scrap (or reduce) its dividend and avoid the ex-dividend date drop in its share price. It bolsters its capital strength and gives shareholders higher expected capital gains (or lower capital losses).

Broadly, the loss of dividends should be offset to some degree by a higher share price and higher capital gains.

But try telling shareholders that the dividends they have lost can be replaced by selling shares.

That they care is in part psychological. Shareholders view a bird (dividend) in the hand as better than one (a capital gain) in the bush.

Selling shares is seen as “dipping into one’s capital”, even though it has the same effect on the shareholder’s capital (the value of shares held) as taking a dividend.

Another reason shareholders care more than you might think is tax.

Typically (based on historical evidence) a franked dividend of $1 leads to a share price fall of around $1.

Read more: Deeming rates explained. What is deeming, how does it cut pensions, and why do we have it?

But for an investor on a zero tax rate (as many retirees are) that $1 dividend is actually worth around $1.43.

This is because the Tax Office rebates that investor 43 cents of tax previously paid by the bank, a so-called dividend imputation payment.

Selling $1.43 of shares to compensate for the lost dividend cash flow leaves them worse off.

Super funds on a low 15% tax rate are also likely to prefer payment of franked dividends since they can use the imputation credits to reduce tax on other investment income.

For high tax rate investors, Australia’s practice of taxing only half of each capital gain can make the higher capital gains associated with higher share prices more attractive than receiving dividends on which they have to pay extra tax.

Read more: Here’s a radical reform that could keep super and pay every retiree the full pension

Under any tax system where dividends and capital gains are taxed differently, deferring dividends hurts some investors and benefits others. Australia’s imputation tax system magnifies that effect, with low tax rate investors being losers.

As it happens, these features of the tax system took centre stage in last year’s election, in which Labor proposals to change both the rules regarding dividend imputation and capital gains were rejected by voters.

The root cause of the hit to dividends is uncertainty about the future.

If economic conditions turn out worse than expected, banks will find themselves hesitant to make loans unless they have sufficient capital to absorb unexpected losses.

To the extent that they use that capital to help restore the health of the economy, all investors (including those reliant on future dividends) will be better off.

– ref. Bank dividends are bare. Here’s why some shareholders hate it more than they should – https://theconversation.com/bank-dividends-are-bare-heres-why-some-shareholders-hate-it-more-than-they-should-137889