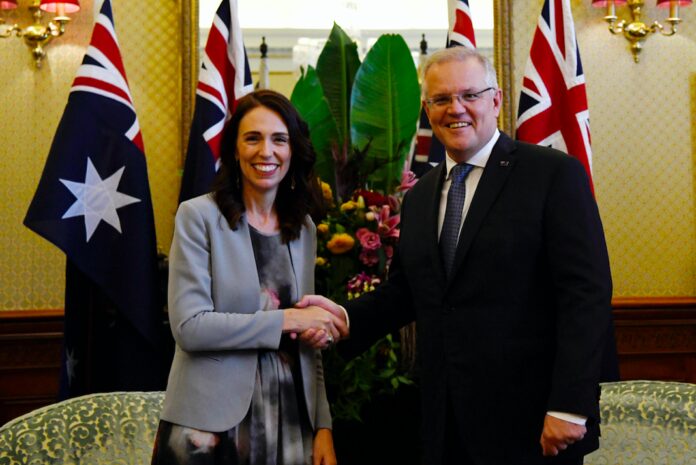 Treasurer Josh Frydenberg will warn against the danger of a protectionist push in Australia as a result of the virus crisis, in a Tuesday speech that also stresses it is vital to get the country moving as soon as possible.

“There is a risk that protectionist sentiment re-emerges on the other side of the crisis, and for that we must be vigilant,” Frydenberg will tell the National Press Club. An extract of his address was released ahead of delivery.

The crisis has prompted a debate about Australia being too dependent on China in terms of both exports and imports, with calls for greater self-sufficiency.

Without mentioning China in the extract, Frydenberg says, “While we must always safeguard our national interest, we must also recognise the great benefits that have accrued to Australia as a trading nation”.

“Unleashing the power of dynamic, innovative, and open markets must be central to the recovery, with the private sector leading job creation, not government.”

As the national cabinet this week considers lifting some restrictions, Frydenberg says for every extra week they remain, “Treasury estimates that we will see close to a $4 billion reduction in economic activity from a combination of reduced workforce participation, productivity and consumption.

“This is equivalent to what around four million Australians on the median wage would earn in a week.”

“We must get people back into jobs and back into work.”

He points out the longer people are unemployed, the harder it is to rejoin the workforce – in the early 1990s, unemployment increased by 5% over three years, then took seven years to get back to its former level.

“As has been remarked, unemployment went up in the elevator, and went down by the stairs. In the current coronavirus, it is expected the unemployment rate will go up by around 5% in three months, let alone three years. It underlines the importance of getting people back to work as soon as possible to avoid the long-term economic and social impacts from a high unemployment rate.”

The national cabinet meets on Tuesday and Friday, with announcements on Friday about unwinding some restrictions.

New Zealand Prime Minister Jacinda Ardern has been invited to join Tuesday’s national cabinet meeting. She said on Monday the meeting would discuss “the creation of a trans-Tasman travel bubble”.

But Ardern added the caveat: “Don’t expect this to happen in a couple of weeks time”. The health gains made in New Zealand had to be locked in, she said.

When Ardern spoke to the media on Monday, New Zealand had had no new cases in the previous 24 hours. Its strategy is one of trying to eliminate the virus, while Australia’s strategy has been one of suppression.

Ardern said Tuesday’s meeting “is without precedent”; it highlighted “the mutual importance of our two countries, and economies, to each other.

“Both our countries’ strong record on fighting the virus has placed us in the enviable position of being able to plan the next stage in our economic rebuild, and to include tran-Tasman travel and engagement in our strategy.”

There will be discussion at the meeting of the progress of Australia’s COVIDSafe app. More than 4.5 million people have downloaded it so far.

National cabinet will also receive a presentation on COVID safe workplaces, which has been a project of the National COVID-19 Coordination Commission.

In his speech Frydenberg says when widespread restrictions were imposed in March Treasury estimated a 10-12% fall in GDP in the June quarter, the equivalent of about $50 billion.

If these restrictions had been akin to the eight-week lockdown in Europe, the impact on GDP could have been 24%, or $120 billion, in the June quarter, he says.

“This would have seen enormous stress on our financial system as a result of increased balance sheet impairments, widespread firm closures, higher unemployment and household debt. This was the cliff we were standing on.”

But notwithstanding Australia’s success in suppressing the virus and its unprecedented economic response, “our economic indicators are going to get considerably worse in the period ahead before they get better.

“Some of the hardest hit sectors like retail and hospitality are among the biggest employers, accounting for more than two million employees between them.”

Credit card data from the banks showed spending on arts and recreational services, accommodation and food services down about 60% and 70% respectively in late April compared to the year before.

“Despite the toilet paper boom and the record increase in retail trade in March due to panic buying, overall consumption, according to NAB data, has fallen 19.5% since the start of the year, with declines across all jurisdictions.”

Treasury forecasts unemployment doubling to 10% in the June quarter, but it could have been 15% without the JobKeeper package, Frydenberg says.

“The economic shock the world is confronting dwarfs the GFC,” he says.

He says Australia has the advantage of having made real progress in suppressing the virus’s spread without a full lockdown. Agriculture, mining and construction have continued – 85% of mining businesses were still operating this month.

“We are by no means out of this crisis,” Frydenberg says. “Nevertheless as we build to the recovery phase, we must also turn our minds to the changes that will be needed to further drive economic growth and employment.”