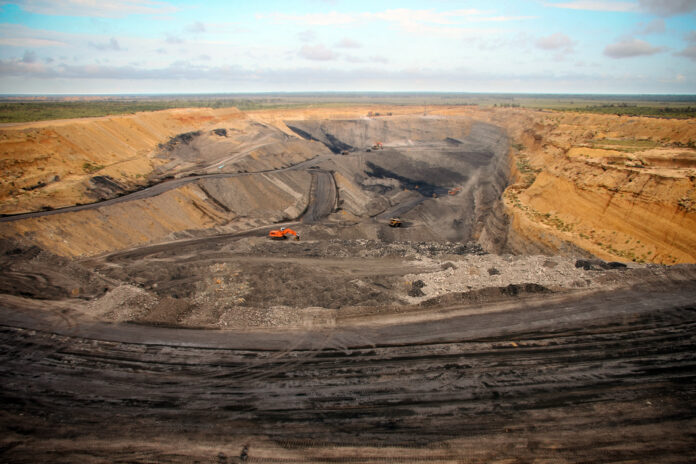 Water is a highly contested resource in this long, oppressive drought, and the coal industry is one of Australia’s biggest water users.

Research released today, funded by the Australian Conservation Foundation, has identified how much water coal mining and coal-fired power stations actually use in New South Wales and Queensland. The answer? About 383 billion litres of fresh water every year.

That’s the same amount 5.2 million people, or more than the entire population of Greater Sydney, uses in the same period. And it’s about 120 times the water used by wind and solar to generate the same amount of electricity.

Monitoring how much water is used by industry is vital for sustainable water management. But a lack of transparency about how much water Australia’s coal industry uses makes this very difficult.

Adani’s controversial Carmichael mine in central Queensland was granted a water licence that allows the company to take as much groundwater as it wants, despite fears it will damage aquifers and groundwater-dependent rivers.

Now more than ever, we must make sure water use by coal mines and power stations are better monitored and managed.

Why does coal need so much water?

Mines in NSW and Queensland account for 96% of Australia’s black coal production.

Coal mining’s water use rate equates to a total consumption of almost 225 billion litres a year in NSW and Queensland, which can be extrapolated to 234 billion litres for Australia, for black coal without considering brown coal.

About 80% of this water is freshwater from rainfall and runoff, extracted from rivers and water bodies, groundwater inflows or transferred from other mines. Mines are located in regions such as the Darling Downs, the Hunter River and the Namoi River in the Murray-Darling Basin.

The other 20% comes from water already contained in tailings (mine residue), recycled water or seepage from the mines.

The burning of coal to generate energy is also a large water user. Water use in coal-fired power stations is even harder to quantify, with a report from 2009 providing the only available data.

Water is used for cooling with power stations using either a once-through flow or recirculating water system.

The water consumed becomes toxic wastewater stored in ash ponds or is evaporated during cooling processes. Water withdrawn is returned to rivers which can damage aquatic life due to the increased temperature.

Data on total water use by coal mines is not publicly available. Despite the development of Australian and international water accounting frameworks, there is no reporting to these standards in coal mine reports.

This lack of consistent and available data means water use by the coal industry, and its negative effects, is not widely reported or understood. The problem is compounded by complex regulatory frameworks that allow gaps in water-use reporting.

A patchwork of government agencies in each state regulate water licences, quality and discharge, coal mine planning, annual reviews of mine operations and water and environmental impacts. This means that problems can fall through the gaps.

An analysis of annual reviews from 39 coal mines in NSW, provided data on water licences and details of water used in different parts of the mine.

Although they are part of mandatory reporting, the method of reporting water use is not standardised. The reviews are required to report against surface water and groundwater licences, but aren’t required to show a comprehensive water balanced account. Annual reviews for Queensland coal mines were not available.

Read more: Why does the Carmichael coal mine need to use so much water?

Using this rate the total water consumed by coal mining is 40% more than the total amount of water reported for all types of mining in NSW and Queensland by the Australian Bureau of Statistics in the same year.

NSW and Queensland coal-fired power stations annually consume 158,300 megalitres of water. One megalitre is equivalent to one million litres.

A typical 1,000-megawatt coal-fired power station uses enough water in one year to meet the basic water needs of nearly 700,000 people. NSW and Queensland have 18,000 megawatts of capacity.

In total, coal mining and coal-fired power stations in NSW and Queensland consume 383 billion litres of freshwater a year – about 4.3% of all freshwater available in those states.

The value of this water is between A$770 million and A$2.49 billion (using a range of low to high security water licence costs).

They withdraw 2,353 billion litres of freshwater per year.

The problem with large water use

Coal mining is concentrated in a few regions, such as the Hunter Valley and the Bowen Basin, which are also important for farming and agriculture.

In NSW and Queensland, the coal industry withdraws about 30% as much water as is withdrawn for agriculture, and this is concentrated in the few regions.

Coal mining and power stations use water through licenses to access surface water and groundwater, and from unlicensed capturing of rainfall and runoff.

This can reduce stream flow and groundwater levels, which can threaten ecosystem habitats if not managed in context of other water users. Cumulative effects of multiple mines in one region can increase the risk to other water users.

The need for an holistic approach

A lack of available data remains a significant challenge to understanding the true impact of coal mining and coal-fired power on Australia’s water resources.

To improve transparency and increase trust in the coal industry, accounting for water consumed, withdrawn and impacted by coal mining should be standardised to report on full water account balances.

The coal industry should also be subject to mandatory monthly reporting and a single, open-access point of water data must be created. Comprehensive water modelling must be updated yearly and audited.

Read more: The government’s UNGI scheme: what it is and why Zali Steggall wants it investigated

Coal water use must be managed in a holistic manner with the elevation of water accounting to a single government agency or common database.

Australia has a scarce water supply, and our environment and economy depend on the sustainable and equitable sharing of this resource.

– ref. Aren’t we in a drought? The Australian black coal industry uses enough water for over 5 million people – https://theconversation.com/arent-we-in-a-drought-the-australian-black-coal-industry-uses-enough-water-for-over-5-million-people-137591