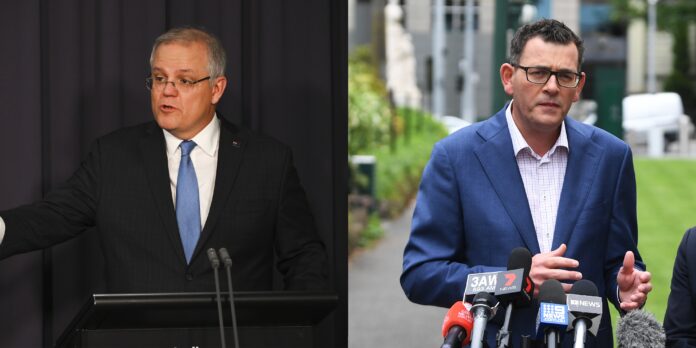 The federal government this week offered independent schools across the country an advance of A$3 billion if they committed to having at least half their students back in the classroom by June 1.

In the case of some states, particularly Victoria, this instruction is in direct contrast to that of the premiers. Victorian schools, following advice from the state’s Chief Health Officer, are committed to online learning for term two with children only attending schools if they have to, such as if their parents are essential workers.

Victoria’s education minister James Merlino has said the federal government is “forcing” independent schools to undermine the state’s strategy. In regard to schools, he said:

Let me be very clear, particularly to the federal government who do not run any schools, we will only transition back to face-to-face teaching for all students when that is the advice of the Victorian Chief Health Officer.

The federal government has consistently maintained the position it is safe for schools to remain open.

The federal government funds independent schools, and the state is in charge of public schools. But beyond these arrangements, is there anything in the Australian Constitution that might give the Commonwealth control over schools in a national emergency situation like the case of a pandemic?

What the Constitution allows the Commonwealth

The Australian Constitution was written in the 1890s and came into effect in 1901. It predates the first world war and the influenza pandemic that followed it.

There is no general emergency power, but it does give the Commonwealth power over “the naval and military defence of the Commonwealth” (s51(vi)). This power was used extensively in both world wars to control many aspects of life from curfews to bread prices.

The Commonwealth also has control of quarantine under s51(ix), but there is no mention of health or education – or indeed the economy – though there are some commercial powers such as over foreign, trading and financial corporations (s51(xx)).

There is a power under s51(xxiiiA) to provide benefits to students and others and for health and medical purposes.

How the Commonwealth can control the states

The Commonwealth and states have done a pretty good job of cooperating so far. The National Cabinet of Commonwealth ministers and state premiers (a concept not found in the Constitution) has made joint decisions on the public health response.

But the messaging on schools has been inconsistent with the federal government claiming it’s safe, while some premiers have taken their own route and transitioned to online learning.

Read more: 5 reasons it’s safe for kids to go back to school

Legally and constitutionally the Commonwealth can’t force schools to open. The fact it has attempted to induce independent schools to reopen by bringing forward a payment highlights that the Commonwealth’s involvement in education, as in so many areas, is through the power of the purse.

The Commonwealth has an almost unlimited power of taxation under s51(ii), together with its power under s96 to make grants to states “on such terms and conditions as the Parliament thinks fit”.

This reached an extreme in the Howard era when the Commonwealth made a payment to state schools conditional on them having at least an hour of physical education per week, and a flagpole.

To be allowed to operate, all schools must be registered with the respective school registration authority in each state or territory, which means states have jurisdiction over school operations. So, if Victoria or any other state decides to compel schools in the state to remain closed (or reopen), it has the power to do so.

What about in an emergency situation?

The Commonwealth’s power to act in an emergency was tested in the global financial crisis of 2008-10 when the Rudd government sent out a “Tax Bonus” payment to all taxpayers. This was challenged by constitutional law lecturer Bryan Pape as going beyond Commonwealth power.

The High Court, in Pape v Commissioner of Taxation, agreed the tax bonus was not authorised by the taxation power, but accepted that there was a global emergency and the payment was in response to it.

Could the Commonwealth claim we are in a national emergency and kids must go back to school? That would be harder to argue than that they should stay home to avoid the virus. It would also be hard for the Commonwealth to argue that an economic imperative trumps a state’s judgement about what is safe for the community.

Read more: Sending children back to school during coronavirus has human rights implications

In the case of Rudd’s tax bonus, the Commonwealth was trying to send every taxpayer a cheque. That is a rather different matter to forcing taxpayers to send their children to school, especially against the wishes of the state.

Let’s hope the Commonwealth and states can reach agreement on this and together get the risk of transmission down to a level we can all accept.

– ref. If COVID-19 is a national emergency, can the federal government take control of schools? – https://theconversation.com/if-covid-19-is-a-national-emergency-can-the-federal-government-take-control-of-schools-137593