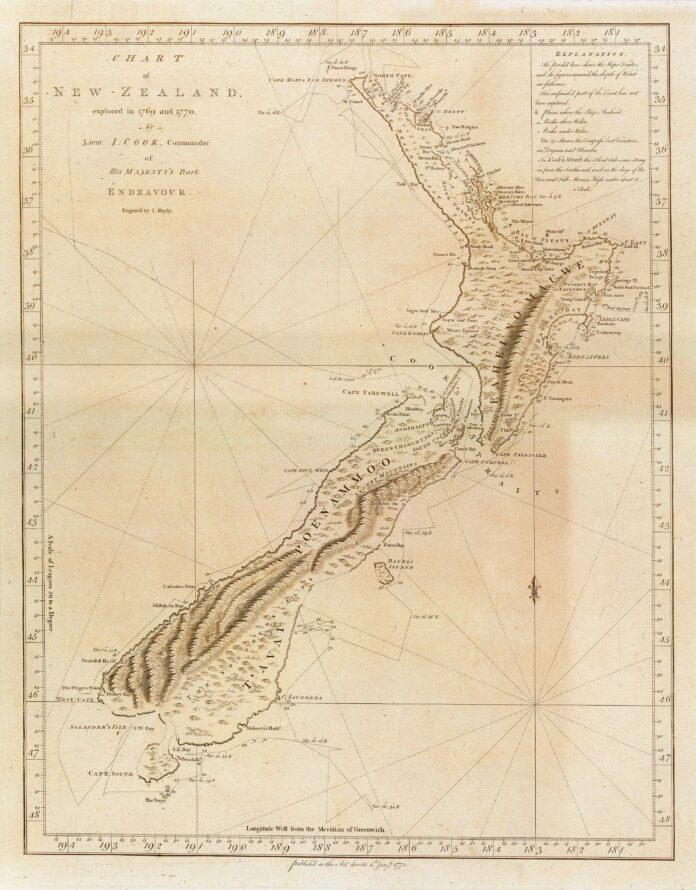 History is always selective, particularly when it is tied up with national identity. Certain stories are recovered, while others remain silent.

Intimate encounters are often muted, even though we know they played a central part in first encounters during the colonial era.

Tuia 250, a government-sponsored series of events to commemorate 250 years since Captain James Cook arrived in New Zealand, focused on Pacific voyaging and first onshore encounters between Māori and Pākehā (non-Māori) during 1769–70, at the expense of reconsidering private history.

Read more: My ancestors met Cook in Aotearoa 250 years ago. For us, it’s time to reinterpret a painful history

The laborious maps and longhand entries in explorers’ journals, their sketches of specimens gathered during their long journeys – these can all be seen as skillful antiques of a bygone era. But they also represent potent past tools of imperialism.

Tuia 250 was about both voyaging and encounter histories, but it seems that re-enacting traditional sailing was easier than restaging the intimate encounters that were central to the colonial enterprise.

Commemorations of voyages across the open oceans sailed clear of the awkward topic of intimacy. The history of intimate encounters remained consigned to a private space, perceived as outside of the making of history and national identity.

But as historian Anne Salmond has written, bodily contact involved Cook’s sailors exchanging items such as nails for sex with women.

In her book The Trial of the Cannibal Dog, Salmond describes the Endeavour’s arrival at Anaura Bay, where Cook’s party went ashore, and the expedition’s official botanist Joseph Banks commented about Māori women being less accessible than Tahitian women.

Banks remarked ruefully that they ‘were as great coquettes as any Europeans could be and the young ones as skittish as unbroke fillies’. If the local women were reluctant to make love with the strangers, however, they were wise, because by Cook’s own reckoning several of his men had stubborn venereal infections, and at least half of the rest had contracted venereal diseases in Tahiti.

The sex industry began at first contact in 1769, and from the 1810s it became large and important – very probably preceding wool, gold and dairy products as New Zealand’s leading earner of overseas exchange.

But Hazel Petrie has argued that intimate encounters have to be considered within the context of cultural practices that emphasised hospitality.

Contemporary Western attitudes sometimes led to characterisations of more casual sexual activity between Māori women and visiting Pākehā men as ‘prostitution’, and in our own time such liaisons have been deemed to represent a ‘sex industry’. But these perceptions may be in large part the result of the different moral codes of the narrators and seeing sexual relationships through different lenses. Māori society may have more typically viewed short- to medium-term relationships with sailors or other visitors in terms of manaakitanga or the normal extension of hospitality with expectations of a courteous material response.

Women as agents of history

According to historians, Cook disapproved of the sexual behaviour of his officers and men, but was unable to stop it. In his journal, Cook wrote:

A connection with Women I allow because I cannot prevent it, but never encourage tho many Men are of opinion it is one of the greatest securities amongst Indians, and it may hold good when you intend to settle amongst them; but with travelers and strangers, it is generally otherwise and more men are betrayed than saved by having connection with their women, and how can it be otherwise since all their Views are selfish without the least mixture of regard or attachment whatever; at least my observations which have been pretty general, have not pointed out to me one instance to the contrary.

Sailors embodied the complex, disease-ridden, sexual shipboard culture of the 18th century, combined with western unequal attitudes towards women and the perception of Polynesian women as exotic.

Gender is so central to the story of Cook. And how Cook, and everything that came after, has done so much to gender in this region.

Māori women were entangled in the encounters as two worlds met. First contact marked the beginning of changes to customary processes (tikanga Māori), ended pre-colonial balance and had profound effects on Māori women’s lives, as the work of indigenous scholar Ani Mikaere has shown.

Mikaere has argued that:

It is often assumed that, according to tikanga Māori, leadership was primarily the domain of men and that men in Māori society exercised power over women. However, evidence abounds which refutes the notion that traditional Māori society attached greater significance to male roles than to female roles.

It came to pass that Māori women, white women missionaries and settlers were all integral to history. As feminist scholar Anne McClintock pointed out of women in imperialism, they were not “hapless onlookers”. They were variously colonisers and colonised.

Just as women were a central part of those first encounters in 1769-70, they continued to be agents of history. Some women, as the helpmeets of Empire, taught generations of schoolchildren about Cook the hero as part of an imperial curriculum.

Navigating a shared future needs to recognise women’s part in colonial encounters. It needs to consider that in the present, as with the past, public and private spaces are interconnected.

– ref. Cook commemorations are mute on intimate encounters and their profound impact on Indigenous women – https://theconversation.com/cook-commemorations-are-mute-on-intimate-encounters-and-their-profound-impact-on-indigenous-women-130322