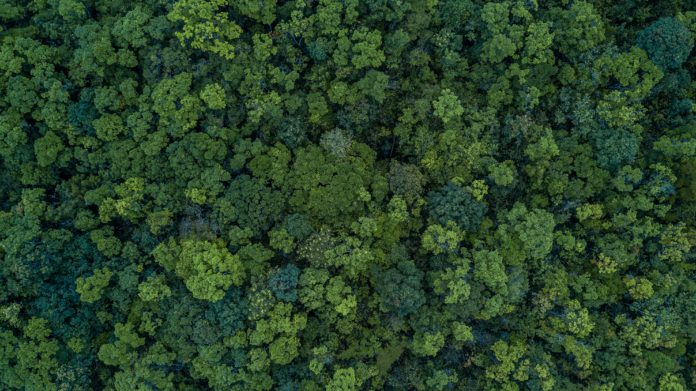 If carbon dioxide levels were to double, how much increase in plant growth would this cause? How much of the world’s deserts would disappear due to plants’ increased drought tolerance in a high carbon dioxide environment?

Compared to pre-industrial levels, the concentration of carbon dioxide (CO₂) in the atmosphere will have doubled in about 20 to 30 years, depending on how much CO₂ we emit over the coming years. More CO₂ generally leads to higher rates of photosynthesis and less water consumption in plants.

At first sight, it seems more CO₂ can only be beneficial to plants, but things are a lot more complex than that.

Let’s look at the first part of the question.

Some plants do grow faster under elevated levels of atmospheric CO₂, but this happens mostly in crops and young trees, and generally not in mature forests.

Even if plants grew twice as fast under doubled CO₂ levels, it would not mean they strip twice as much CO₂ from the atmosphere. Plants take carbon from the atmosphere as they grow, but that carbon is going straight back via natural decomposition when plants die or when they are harvested and consumed.

At best, you might be mowing your lawn twice as often or harvesting your plantation forests earlier.

The most important aspect is how long the carbon stays locked away from the atmosphere – and this is where we have to make a clear distinction between increased carbon flux (faster growth) or an increasing carbon pool (actual carbon sequestration). Your bank account is a useful analogy to illustrate this difference: fluxes are transfers, pools are balances.

Of the almost 10 billion tonnes (gigatonnes, or Gt) of carbon we emit every year through the burning of fossil fuels, only about half accumulates in the atmosphere. Around a quarter ends up in the ocean (about 2.4 Gt), and the remainder (about 3 Gt) is thought to be taken up by terrestrial plants.

While the ocean and the atmospheric sinks are relatively easy to quantify, the terrestrial sink isn’t. In fact, the 3 Gt can be thought of more as an unaccounted residual. Ultimately, the emitted carbon needs to go somewhere, and if it isn’t the ocean or the atmosphere, it must be the land.

So yes, the terrestrial system takes up a substantial proportion of the carbon we emit, but the attribution of this sink to elevated levels of CO₂ is difficult. This is because many other factors may contribute to the land carbon sink: rising temperature, increased use of fertilisers and atmospheric nitrogen deposition, changed land management (including land abandonment), and changes in species composition.

Current estimates assign about a quarter of this land sink to elevated levels of CO₂, but estimates are very uncertain.

In summary, rising CO₂ leads to faster plant growth – sometimes. And this increased growth only partly contributes to sequestering carbon from the atmosphere. The important questions are how long this carbon is locked away from the atmosphere, and how much longer the currently observed land sink will continue.

The second part of the question refers to a side-effect of rising levels of CO₂ in the air: the fact that it enables plants to save water.

Plants regulate the exchange of carbon dioxide and water vapour by opening or closing small pores, called stomata, on the surface of their leaves. Under higher concentrations of CO₂, they can reduce the opening of these pores, and that in turn means they lose less water.

This alleviates drought stress in already dry areas. But again, the issue is more complex because CO₂ is not the only parameter that changes. Dry areas also get warmer, which means that more water evaporates and this often compensates for the water-saving effect.

Overall, rising CO₂ has contributed to some degree to the greening of Earth, but it is likely that this trend will not continue under the much more complex combination of global change drivers, particularly in arid regions.