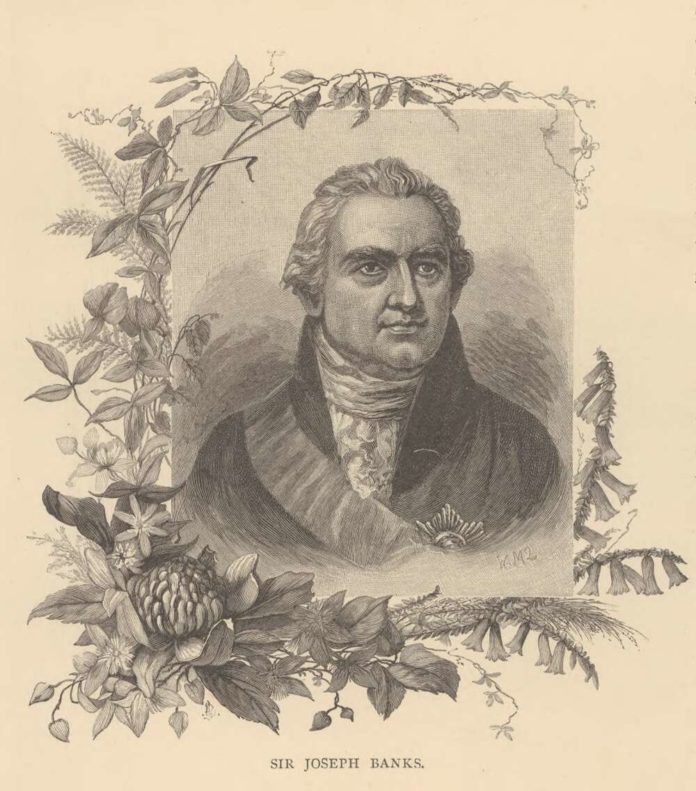 James Cook and his companions aboard the Endeavour landed at a harbour on Australia’s southeast coast in April of 1770. Cook named the place Botany Bay for “the great quantity of plants Mr. Banks and Dr. Solander found in this place”.

Joseph Banks and Daniel Solander were aboard the Endeavour as gentleman botanists, collecting specimens and applying names in Latin to plants Europeans had not previously seen. The place name hints at the importance of plants to Britain’s Empire, and to botany’s pivotal place in Europe’s Enlightenment and Australia’s early colonisation.

Cook has always loomed large in Australia’s colonial history. White Australians have long commemorated and celebrated him as the symbolic link to the “civilisation” of Enlightenment and Empire. The two botanists have been less well remembered, yet Banks in particular was an influential figure in Australia’s early colonisation.

When Banks and his friend Solander went ashore on April 29, 1770 to collect plants for naming and classification, the Englishman recollected they saw “nothing like people”. Banks knew that the land on which he and Solander sought plants was inhabited (and in fact, as we now know, had been so for at least 65,000 years). Yet the two botanists were engaged in an activity that implied the land was blank and unknown.

They were both botanical adventurers. Solander was among the first and most favoured of the students of Carl Linnaeus, the Swedish botanist and colonial traveller who devised the method still used today for naming species. Both Solander and Banks were advocates for the Linnaean method of taxonomy: a systematic classification of newly named plants and animals.

When they stepped ashore at “Botany Bay” in 1770, the pair saw themselves as pioneers in a double sense: as Linnaean botanists in a new land, its places and plants unnamed by any other; as if they were in a veritable terra nullius.

Terra nullius, meaning “nobody’s land”, refers to a legal doctrine derived from European traditions stretching back to the ancient Romans. The idea was that land could be declared “empty” and “unowned” if there were no signs of occupation such as cultivation of the soil, towns, cities, or sacred temples.

As a legal doctrine it was not applied in Australia until the late 1880s, and there is dispute about its effects in law until its final elimination by the High Court in Mabo v Queensland (No. II) in 1992.

Cook never used this formulation, nor did Banks or Solander. Yet each in their way acted as if it were true. That the land, its plants, and animals, and even its peoples, were theirs to name and classify according to their own standards of “scientific” knowledge.

In the late eighteenth century, no form of scientific knowledge was more useful to empire than botany. It was the science par excellence of colonisation and empire. Botany promised a way to transform the “waste” of nature into economic productivity on a global scale.

Throughout the Endeavour’s voyage, Banks, Solander, and their assistants collected more than 30,000 plant specimens, naming more than 1,400 species.

By doing so, they were claiming new ground for European knowledge, just as Cook meticulously charted the coastlines of territories he claimed for His Majesty, King George III. Together they extended a new dispensation, inscribed in new names for places and for plants written over the ones that were already there.

Long after the Endeavour returned to Britain, Banks testified before two House of Commons committees in 1779 and 1785 that “Botany Bay” would be an “advantageous” site for a new penal colony. Among his reasons for this conclusion were not only its botanical qualities – fertile soils, abundant trees and grasses – but its virtual emptiness.

When Banks described in his own Endeavour journal the land Cook had named “New South Wales”, he recalled: “This immense tract of Land … is thinly inhabited even to admiration …”. It was the science of botany that connected emptiness and empire to the Enlightened pursuit of knowledge.

One of Banks’s correspondents was the Scottish botanist and professor of natural history, John Walker. Botany, Walker wrote, was one of the “few Sciences” that “can promise any discovery or improvement”. Botany was the scientific means to master the global emporium of commodities on which empire grew.

Botany was also the reason why it had not been necessary for Banks or Solander to affirm the land on which they trod was empty. For in a very real sense, their science presupposed it. The land, its plants and its people were theirs to name and thereby claim by “discovery”.

When Walker reflected on his own botanical expeditions in the Scottish Highlands, he described them as akin to voyages of discovery to lands as “inanimate & unfrequented as any in the Terra australis”.

As we reflect on the 250-year commemoration of Cook’s landing in Australia, we ought also to consider his companions Banks and Solander, and their science of turning supposed emptiness to empire.

– ref. Botany and the colonisation of Australia in 1770 – https://theconversation.com/botany-and-the-colonisation-of-australia-in-1770-128469