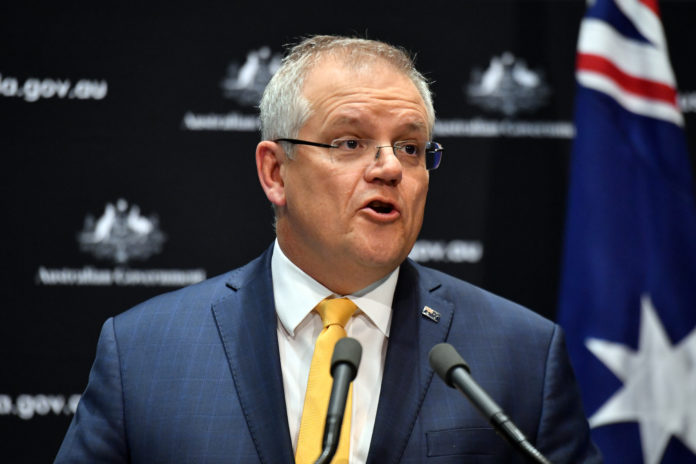 Despite Labor’s voting intentions gain, Scott Morrison’s ratings jumped again, following a record 38-point gain in net approval last time. 68% (up seven) were satisfied with his performance and 28% (down seven) were dissatisfied. That’s a net approval of +40, up 14 points. Morrison’s net approval is the best for a PM since Kevin Rudd in October 2009.

Anthony Albanese also improved his ratings, with his net approval up two points to +11 after a nine-point gain last time. Morrison led as better PM by 56-28 (53-29 three weeks ago).

Ratings for the PM are correlated strongly with voting intentions, so having the PM’s net approval at +40 while voting intentions are tied is abnormal. Analyst Kevin Bonham tweeted this chart showing that this Newspoll is a major outlier.

The most likely explanation for the discrepancy between voting intentions and the PM’s ratings is that Labor and Greens voters approve of Morrison’s performance on the coronavirus crisis, but they distrust the Coalition in general.

Australia’s performance on coronavirus has been strong by international standards. I expect Morrison’s ratings to stay high if Australia continues to perform well, as long as the public thinks there is a crisis. Once the crisis is perceived to be over, Morrison’s ratings are likely to drop over normal partisan conflict.

South Korea is another country that has performed well on coronavirus. The left-wing Democratic party of the incumbent president was rewarded for this performance at April 15 parliamentary elections. They won 180 of the 300 seats (up 57 since 2016), to 103 for conservative parties (down 19).

This section is an updated version of an article I wrote for The Poll Bludger, published on Friday.

In the FiveThirtyEight poll aggregate, Donald Trump’s ratings with all polls are 43.4% approve, 52.4% disapprove (net -9.0%). With polls of registered or likely voters, Trump’s ratings are 43.8% approve, 52.5% disapprove (net -8.7%). Since my article three weeks ago, Trump has lost five points on net approval, returning his ratings to about their early March levels, before the coronavirus crisis began.

As the US coronavirus death toll increases to over 50,000, there has been far more criticism of Trump’s early response, and this appears to have punctured the “rally round the flag” effect.

Furthermore, there has been a massive economic impact from the virus and related shutdowns: in the past five weeks, over 26 million filed for unemployment benefits. In the latest week, over 4.4 million filed. While this is a slowdown, it is far ahead of the previous record of 695,000 weekly jobless claims. The April jobs report, to be released in early May, will be grim.

The RealClearPolitics average of national polls gives Joe Biden a 5.9% lead over Trump, little changed from 6.1% three weeks ago. However, most of the polls in the average were taken in early April, when Trump’s ratings were better.

As we know from 2016, the US does not use the popular vote to elect presidents; instead, each state is allocated Electoral Votes (EVs). A state’s EVs are the sum of its House seats (population dependent) and senators (always two). There are 538 total EVs, so it takes 270 to win. With two minor exceptions, states award their EVs winner-takes-all.

In 2016, Trump won 306 EVs to Hillary Clinton’s 232, ignoring “faithless” electors, despite losing the popular vote by 2.1%. Trump won Florida, Pennsylvania, Wisconsin and Michigan by 1.2% or less.

The three most recent Florida polls give Biden an average two-point lead. In Michigan, he has an eight-point lead in the only April poll. In Pennsylvania, Biden averages a seven-point lead in two April polls. In Arizona, which has trended Democratic at recent elections, Biden leads Trump by 9% in an April poll.

Despite noisy protests in Michigan and other states advocating an end to social distancing, polls show the vast majority of Americans want social distancing to continue. In an AP-NORC poll, just 12% thought distancing measures went too far, 26% said they didn’t go far enough and 61% said they are about right.

To have a realistic chance of winning the next election, Trump needs the US economy to be perceived as improving by November. While his base is loyal, lower-educated voters in general want a good economy, and Trump needs their support to offset losses among higher educated voters owing to his behaviour.

Despite the continued economic and coronavirus woe, the Dow Jones has rebounded from a low below 18,600 on March 23 to be currently above 23,700. Stock traders anticipate a V-shaped recovery, which would assist Trump. But since March 31, there have been 25,000 to 39,000 new US coronavirus cases every day. I am sceptical that the US can reduce the caseload to a point where economic activity can safely resume anytime soon.

The Leadbeater’s possum finally had its day in court. It may...