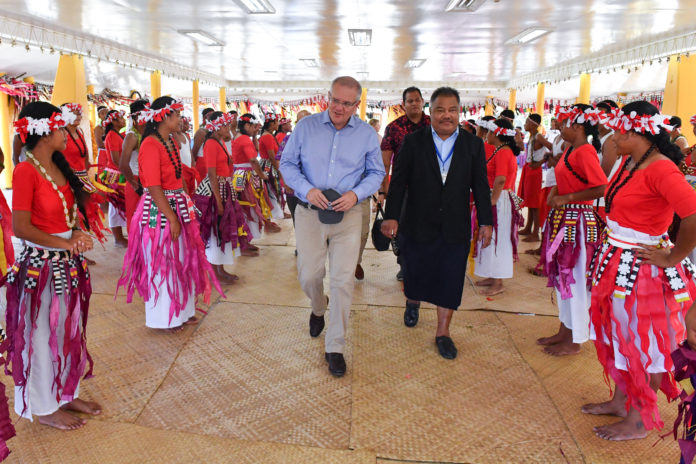 Across the globe, the coronavirus pandemic has prompted countries and governments to become increasingly inward-looking. Australia is not immune to this. One of the effects of this situation has been that the “Pacific Step-up” appears to have dropped entirely off the political radar.

The step-up is – or was – the signature foreign policy of the Morrison government. Although it predates Scott Morrison becoming prime minister, under his leadership it had really come to the fore. We saw an increase in ministerial visits to the region, a ramping up of labour mobility opportunities for Pacific islanders, and the establishment of a A$2 billion infrastructure financing facility.

So, how does the Pacific Step-up need to evolve to help respond to the challenges posed by coronavirus?

Read more: Despite its Pacific ‘step-up’, Australia is still not listening to the region, new research shows

It is too easy for the Australian media (and indeed the Australian public) to perpetuate the trope that Pacific people are helpless – chronic victims who need to be rescued from whatever calamity has most recently befallen them. Now is the time for Australian policymakers to step up and demonstrate real respect for their Pacific counterparts.

On top of the increasingly devastating effects of climate change, Pacific island countries are now managing the twin challenges of a potential public health emergency and its severe economic ramifications.

When it comes to the former, the focus has been on prevention. Many countries took swift and significant steps to minimise the risk of the virus entering their communities. Borders have been closed, restrictions on movements enforced and health and medical systems enhanced.

Pacific island countries are also already feeling the economic impacts of the global shutdown. This is particularly evident in those countries that rely on tourism and remittances for revenue, livelihoods and employment.

Several countries have moved quickly and decisively to introduce economic support and stimulus packages to meet some of the most pressing needs of their populations. Maintaining these into the medium and longer term will be a challenge.

In Solomon Islands, Vanuatu, Fiji and Tonga, the impacts of the recent Tropical Cyclone Harold are presenting additional challenges. Reaching Category 5 strength, it caused more than 30 deaths and left large amounts of damage and destruction in its wake. Australia and other partners (particularly France and New Zealand) have provided assistance to government agencies in the region that are charged with responding to disasters of this type.

In the Pacific, and among many Australian commentators, it is widely acknowledged that the step-up is driven largely by geo-strategic anxiety about the growing influence of China in the Pacific islands region. Coronavirus has done little to dilute this angst. In some instances, it appears to have accentuated it. Certainly, China has made it abundantly clear it is ready, willing and able to be a friend in need for Pacific island countries.

A more sophisticated and nuanced Pacific Step-up that addresses the challenges posed by coronavirus provides Australia with an opportunity to demonstrate to Pacific counterparts its ability and willingness to offer something that is different and more valuable than is available elsewhere.

This can take one or more of several forms. First of all, Australia should continue to advocate to the global community the need to provide tailored financial support to Pacific island countries. This must include lobbying for meaningful debt relief to underpin economic recovery.

The IMF has already made some moves in this regard. Australia has also moved quickly in relation to its most recent loan to PNG. When the Pacific Islands Forum’s finance and economic ministers meet online in the near future, this will likely be on the agenda. Australia should look to have something concrete to put forward in support of this, including offers to lobby the G7 and G20.

Recently, New Zealand Foreign Minister Winston Peters raised the possibility of a New Zealand-Australia “bubble” based on low numbers of infections in both countries. He saw this as a basis for reopening the borders to allow for freer movement of people and goods.

Pacific island countries that have no COVID-19 cases – there are several – should look to be part of a “Pacific bubble” if this conversation goes forward. This would maintain Pacific islanders’ participation in labour mobility schemes.

Australia and New Zealand are also the key markets for Pacific tourism. The sooner tourists can be welcomed back to the resorts and beaches, the sooner island livelihoods can be restored.

The rhetoric of the Pacific Step-Up has been couched in terms such as “Pacific family”. We now need to know what this means for how Australia can and will support Pacific states and communities in the face of coronavirus.