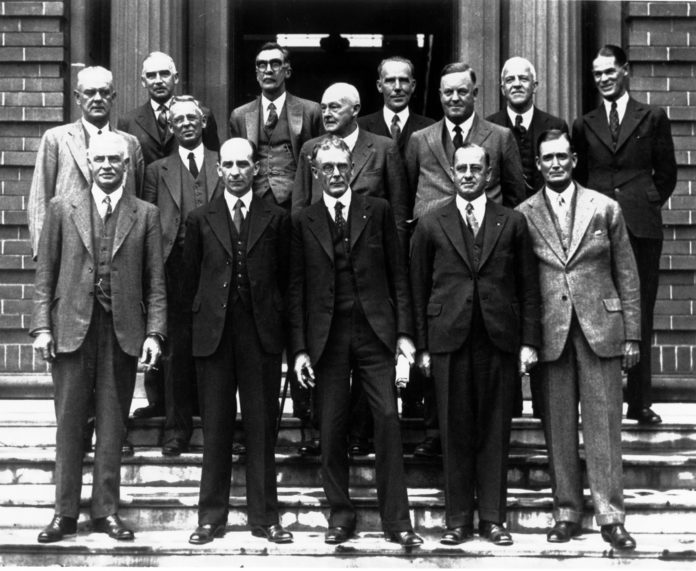 In the wake of COVID-19, we’re seeing intense international competition for urgently-needed supplies including personal protection equipment and ventilators. In Australia, this could extend to other critical imports such as pharmaceuticals and medicines. And when our manufacturing sector can’t fill unexpected breaks in supply chains, we all face risk.

However, Australians have lived through crises of comparable magnitude before. During and after the two world wars, scientific innovation played a crucial role in reform. It led to the creation of the Council for Scientific and Industrial Research (CSIR) and an array of subsequent discoveries.

Some may assume life will go back to normal once COVID-19 withdraws. But if the past is to be learnt from, Australia should prepare for a greatly different future – hopefully one in which science and innovation once more take centre stage.

Read more: How Australia played the world’s first music on a computer

The birth of the CSIR

It was WWI that heightened awareness of the role of science in defence and economic growth. In December 1915, Prime Minister William (Billy) Hughes announced he would set up a national laboratory “which would allow men of all branches of science to use their capabilities in application to industry”.

This led to the formation of the CSIR in 1926, and its rebirth as the CSIRO in 1949. In the years after WW1, the CSIR contributed greatly to improvements in primary production, including through animal nutrition, disease prevention, and the control of weeds and pests in crops. It also advanced primary product processing and overseas product transport.

In 1937, the CSIR’s mandate was expanded to include secondary industry research, including a national Aircraft and Engine Testing and Research Laboratory. This was motivated by the government’s concern to increase Australia’s manufacturing capabilities and reduce its dependence on technology imports.

War efforts in the spotlight

The CSIR’s research focus shifted in 1941 with the attack on Pearl Harbour. Australian war historian Boris Schedvin has written about the hectic scramble to increase the nation’s defence capacities and expand essential production following the attack, including expansion of the scientific workforce.

The John Curtin government was commissioned in October, 1941. Curtin appointed John Dedman as the Minister for War Organisation and Industry, as well as the minister in charge of the CSIR. Dedman’s department was concerned with producing military supplies and equipment, and other items to support society in wartime.

Dedman instructed the council to concentrate on “problems connected with the war effort”. The CSIR responded robustly. By 1942, the divisions of food preservation and transport, forest products, aeronautics, industrial chemistry, the national standards laboratory and the lubricants and bearings section were practically focused on war work full-time.

The Division of Industrial Chemistry was the division most closely involved in actual production. It was formed in 1940 with Ian Wark as chief, who’d previously worked at the Electrolytic Zinc Company.

Wark was familiar with the chemical industry, and quickly devoted resources to developing processes (using Australian materials) to produce essential chemicals to the pilot plant stage. They were soon producing chemicals for drugs at the Fishermans Bend site, including the starting material for the synthesis of the anaesthetic drug novocaine (procaine).

The researchers developed a method to separate the drug ergot, which is now essential in gynaecology, from rye. They also contributed directly to the war effort by manufacturing the plasticiser used in the nose caps of bullets and shells.

In response to the current pandemic, CSIRO at the Australian Centre for Disease Preparedness in Geelong, Victoria, is working with the international Coalition for Epidemic Preparedness to improve understanding of the SARS-CoV-2 virus. They are currently testing two vaccine candidates for efficacy, and evaluating the best way to administer the vaccine.

Australian scientists have made monumental contributions on this front in the past. In the 1980s, CSIRO and its university collaborators began efforts that led to the creation of anti-flu drug Relenza, the first drug to successfully treat the flu. Relenza was then commercialised by Australian biotech company Biota, which licensed the drug to British pharmaceutical company GlaxoSmithKline.

The CSIRO also invented the Hendra virus vaccine for horses, launched in 2012.

Prior to that, Ian Frazer at the University of Queensland developed the human papillomavirus (HPV) vaccine which was launched in 2006.

Read more: How we developed the Hendra virus vaccine for horses

What can we take away?

COVID-19 is one of many viral diseases that need either a vaccine or a drug (or both). Others are hepatitis B, dengue fever, HIV and the viruses that cause the common cold. Now may be Australia’s chance to use our world class medical research and medicinal chemistry capabilities to become a dominant world supplier of anti-viral medications.

As was the case during WWI and WWII, this pandemic drives home the need to retain our capabilities at a time of supply chain disruption. While it’s impossible for a medium-sized economy like Australia’s to be entirely self-sufficient, it’s important we lean on our strengths to not only respond, but thrive during these complicated times.

In 2020, Australia has a much greater and broader research and production capacity than it did in 1940. And as we march through this pandemic, we can learn from the past and forge new paths to enhance our position as pioneers in sciencific innovation.

– ref. Coronavirus lessons from past crises: how WWI and WWII spurred scientific innovation in Australia – https://theconversation.com/coronavirus-lessons-from-past-crises-how-wwi-and-wwii-spurred-scientific-innovation-in-australia-136859