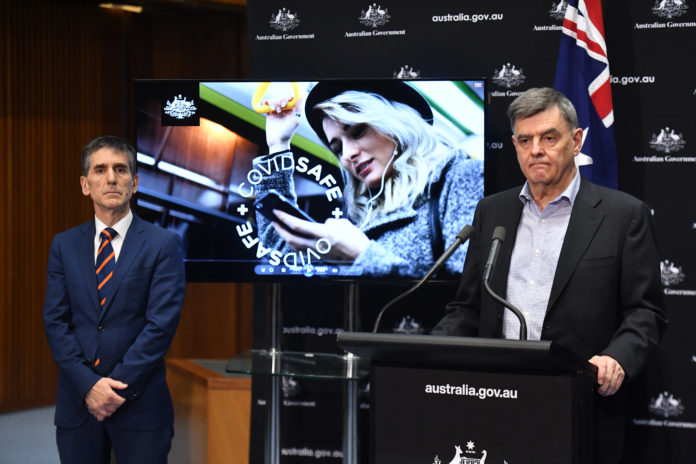 Chief Medical Officer Brendan Murphy has predicted a more than 50% take up of the new “COVIDSafe” app, as the government mobilises a broad range of health professionals to convince people to download the tracing device.

The app, launched by Health Minister Greg Hunt on Sunday, will broaden and speed up the tracing of contacts a person testing positive for COVID-19 has had.

Fearing many people will shy away from the app because of privacy concerns, the government has surrounded it with what it describes as the “strongest ever” security provisions. Hunt has made a determination under the biosecurity legislation enshrining protections. There will also be legislation for the app when parliament meets in May.

Data must be held in Australia, and not used for any purpose other than tracing contacts of a COVID case.

Once a person who has downloaded the app has tested positive they must give permission before the data on it can be retrieved. Only state health officials will then be able to access the data.

There are prohibitions on coercing or requiring anyone to install or use the app, whether by positive obligation, or adverse consequences of refusing to do so.

For example, there is a prohibition on an employer refusing to enter into or continue a contract or arrangement on this basis, or a person refusing to allow someone to enter premises.

Experts disagree about the needed take up for the app to be effective. In Singapore the take up rate was only 20%.

The Australian government has spoken of a take up rate of 40%.

Hunt was flanked by health experts at his news conference, including the secretary for the Australian Nursing and Midwifery Federation, Annie Butler, and the president of the Australian Medical Association, Tony Bartone.

Backed by opinion testing about the most effective way to convince the public, Hunt is the ministerial face of the app, after earlier appearances by the Minister for Government Services, Stuart Robert, were counter-productive.

The app on Sunday was endorsed by more than a dozen health sector organisations.

Hunt said Australia had seen a “sustained and consolidated and now extended flattening of the curve”.

“All these things mean we are doing well as a nation, but we have not won yet.”

Murphy made it clear the enhanced ability to trace fast was particularly important in relation to younger adults.

The government is arguing the app will be a factor in helping decisions on when and what restrictions can be eased.

Australian Banking Association CEO Anna Bligh said the banks’ CEOs would download the app “and, to protect staff and customers, encourage their staff to do the same”.

Read more: Is the government’s coronavirus app a risk to privacy?

Opposition health spokesman Chris Bowen said the app could play a constructive role if handled correctly. The opposition would look at the legislation very constructively and was pleased the government had agreed to refer it to the Senate committee that is examining COVID-19 matters.

But the Law Council of Australia expressed some concerns. “Most important is the concern that the Determination instrument underpinning the legality of the app makes no provision for oversight and reporting on its use,” it said.

Meanwhile, as the debate continued about when children should return to schools, a NSW study by the National Centre for Immunisation Research and Surveillance (NCIRS) found very limited transmission in schools.

The study, commissioned by the state government and released Sunday, found:

NCIRS is a research organisation that provides independent expert advice on all aspects of vaccine preventable diseases and social and other issues related to immunisation.

The situation on schools is a patchwork across the country. Scott Morrison has been strongly in favour of children being at school. In NSW they will reopen for all students from May 11 but only for a day a week.

But the Andrews government in Victoria is keeping schools closed for the bulk of children, relying on the advice of its own chief health officer Brett Sutton, who has taken a tougher line than his fellow medical officers. The Victorian opposition at the weekend called for schools to be open.

Federal education minister Dan Tehan said on Sky on Sunday the government’s hope was to see all schools teaching all children in the classroom by the end of May.