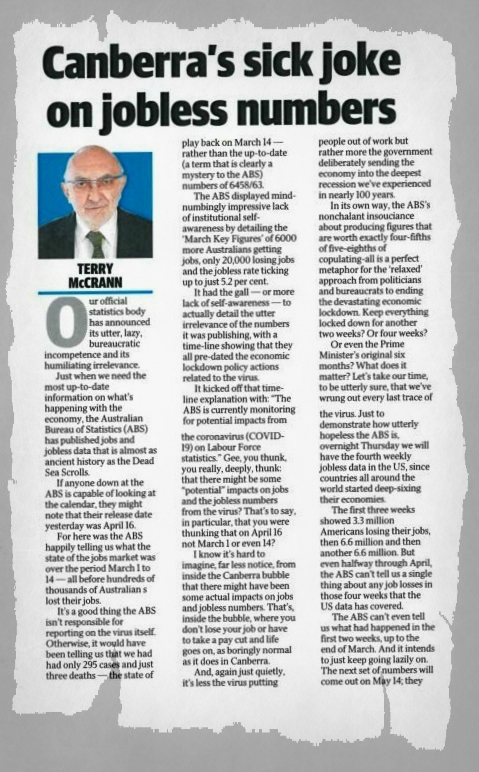 In critical times, we expect our public institutions to step up. Inevitably, we are going to judge them, as we should, because it is important that they get decisions right.

But judgements about an institution have to be based on an informed understanding of what it is doing; and what are the right and wrong ways for it to go about its job.

McCrann lambasted the ABS for having released labour force survey statistics that he called ‘hopelessly out of date’, relating to the period from March 1 to 14.

Instead, he argued, we should be aiming for the same “real-time” weekly figures on unemployment as in the United States.

There are three things wrong with McCrann’s claims.

First, the ABS moved at high speed to provide extra real-time measures of the effect of COVID-19 on the Australian economy. Take a quick visit to www.abs.gov.au/covid19.

The ABS began a new weekly survey of 1000 businesses on March 19. The near real-time results are providing valuable information on topics such as how businesses are adjusting hours worked by their employees.

The ABS has stepped up, quickly

This week saw the release of the initial versions of two extra publications. One is based on a survey of 1000 Australian households from the first week of April. It includes information on the impact of COVID-19 on jobs and hours worked by members of those households.

The other is derived from business payroll information from the Australian Tax Office. It gives a comprehensive perspective on what is happening to jobs. The data released this week covers the period to April 4, with updates to follow every two weeks.

These new data sources do record the fast loss of jobs and the large drop in hours worked that were expected. They will provide an important input to government decisions on what policies are needed in these difficult times. The speed at which the ABS has put these data together is impressive.

Other countries work no faster

Second, the real-time data from the United States is the number of new claims being made for unemployment benefits. That is a completely different data series to the Labour Force Survey.

Far from being real-time, labour force numbers for the United States for March, released by its Bureau of Labor Statistics in early April, relate to exactly the same time period as in Australia.

It’s certainly true, however, that Australia could make better use of its unemployment benefit payment data. The most recent release of those data is from last December.

An excellent way forward would be for the ABS to partner with the Department of Social Services (in the same way as it has with the Tax Office) to start providing two-weekly releases of detailed data on the number of Job Seeker and Job Keeper payments.

Third, getting labour force numbers from the ABS in the usual way and supplementing them with additional surveys is the right way to go. The new data are especially helpful in the short term.

As the economy evolves the well understood and long running Labour Force survey data will become increasingly important. It remains our most authoritative way to track what is happening in the labour market. As well, it provides essential links to how the economy has responded to downturns and economic recoveries in the past.

So let’s keep our criticism for when an institution really does get it wrong. At a time where the value of accurate and relevant information on economy activity is at a premium, we’re lucky to have the ABS.

– ref. The attacks are misguided: in a time of crisis the Bureau of Statistics is serving us well – https://theconversation.com/the-attacks-are-misguided-in-a-time-of-crisis-the-bureau-of-statistics-is-serving-us-well-136958