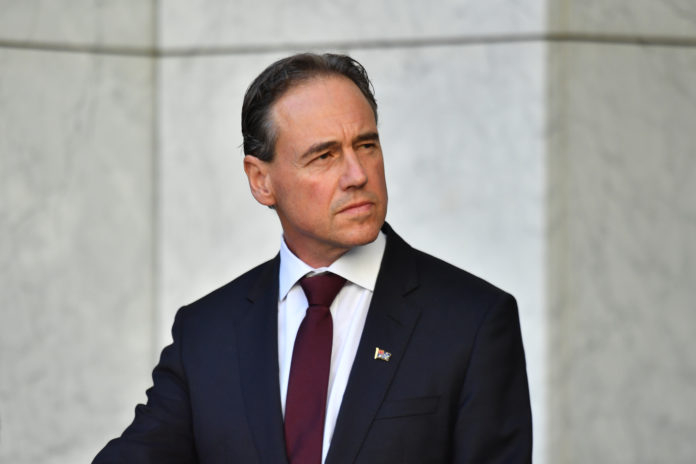 Greg Hunt is set to become the lead ministerial face of the sales effort for the proposed controversial new COVID-19 tracing app, aided by the government’s health professionals.

Federal cabinet discussed the app at its Wednesday meeting, and the national cabinet on Friday will be briefed on it.

The main ministerial responsibility for the app so far has been carried by the Minister for Government Services, Stuart Robert, who oversees the Digital Transformation Agency.

But it is recognised in government circles that having Hunt and the health professionals – the latter dubbed the “lab coats” – spearheading the app’s promotion will give a better chance of boosting its take up.

Brendan Murphy, the chief medical officer, has become a familiar and credible public figure in recent weeks, as have deputies Paul Kelly and Nick Coatsworth.

The use of the health experts is reinforced by government research.

Hunt has been carrying a great deal of the messaging during the crisis. Robert is a poor performer who blundered when he gave false information about a crash of the Centrelink computer system.

Kelly on Wednesday appealed to the public to “please consider” the app.

“It’s important because if we can really get on top of [contact tracing], it will allow us much more leeway to change the social distancing measures,” Kelly said.

When a person developed COVID-19 the app would enable the quick identification of the contacts they’d had with other people.

Currently tracking a patient’s contacts is done manually by so-called virus “detectives”. But it can be a slow process, and has the problem of relying on the patient’s memory.

It would also be logical to have Hunt as the frontman because downloading the information from the app, with the person’s permission, would be done by state health departments which are responsible for contact tracing.

It is not clear whether a multi-national company would be involved in the storage of the data, where it would be stored, and what penalties there would be for any misuse.

Scott Morrison is very keen on the app, which would be voluntary, but the government recognises there are extensive community doubts. To be most effective, a high proportion of the population would have to be willing to download the app, although just how high is a subject of dispute. Kelly claimed it would be advantageous even if only taken up by a small proportion: “anything more than zero is going to be useful”.

The government has emphasised the app would not be a geographic tracking device. But this misses the point that some people would be dubious about the device identifying who they were with, rather than being worried about the actual place of contact.

Porter said in a Wednesday radio interview, “In terms of the type of information that any of your listeners might consent to being provided commercially or to government, there will be no information in the system more safe and more private and more narrowly used for the specific health purpose than this information”.

While the app, based on overseas experience, notably in Singapore, apparently originated from the Home Affairs department, it is understood no Home Affairs powers would be involved in its use.

Essential Research published responses this week to a series of propositions about the app.

Only 38% said they would download it onto their mobile phone and only 35% were confident the government would not misuse the data.

More than six in ten (63%) said they would be concerned about the security of their personal data if the app was on their phone.

Some 52% agreed the app would help limit the spread of the virus, and 42% said it would speed up removal of physical distancing restrictions.

Former deputy prime minister Barnaby Joyce has criticised the app saying “I treasure the government knowing as little about me as possible”.

Labor leader Anthony Albanese has given broad support for the app but says the government needs to be very clear about the protections that would be put in place.