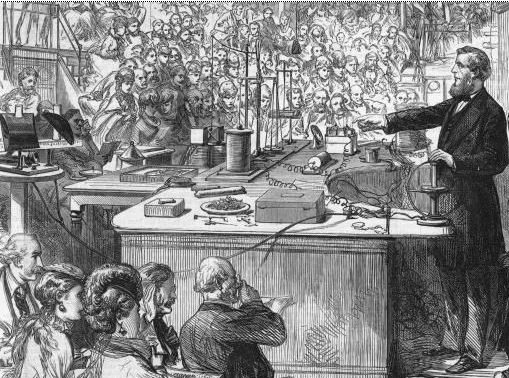 Source: The Conversation (Au and NZ) – By Ian Hesketh, ARC Future Fellow, The University of Queensland

Respirators and face masks are staple pieces of personal protective equipment for hospital workers and others in public health, as the COVID-19 pandemic has reminded us.

They can protect the wearer, but for diseases like COVID-19 that spread via discharged droplets they can also help prevent infected people spreading the disease further.

We can trace the popularity of respirators back to a paper presented to the Royal Institution in London in 1870 by a man named John Tyndall.

With the help of a beam of light, Tyndall demonstrated not only that dust in the air could contain germs and disease but also that a cotton-wool respirator could filter them out. The story of how Tyndall, an Irish physicist, became an advocate for the germ theory of disease and the mass production of cotton-wool respirators is far from straightforward.

Who was John Tyndall?

Tyndall is today little remembered, although he has recently received more attention including a well-received biography and the publication in instalments of his massive correspondence.

Much of the attention has to do with the fact that several of his discoveries contributed to our understanding of climate science. He discovered what we now call the “greenhouse effect” of carbon dioxide in the atmosphere, as well as drawing links between the movement of glaciers and atmospheric pressure. He also explained, by considering the effect of light on the particles in the air, why the sky is blue.

It was researching light and particles that led Tyndall to think more carefully about what he called “Dust and Disease”, the title of his January 1870 lecture at the Royal Institution. In order to study the decomposition of water vapour by light, Tyndall decided he needed to remove dust particles in the air that were complicating his experimental results. This proved more difficult than he anticipated.

As he tried various strategies for removing the dust that seemed ubiquitous in the beam of light, he let some of the dust particles pass over the tip of a flame. At this point the matter burnt up in a trail of smoke, only leaving behind a blackness in the light beam. This was not what Tyndall expected and it led him to accept that the matter was organic in nature.

He soon discovered these organic dust particles were not only found in his Royal Institution laboratory but were in the air everywhere, and were therefore constantly passing into human lungs with every breath. As Tyndall wrote:

There is no respite to this contact with dirt, and the wonder is not that we should from time to time to suffer from its presence, but that so small a portion of it would appear to be deadly to man.

But deadly it most assuredly was. As his biographer Roland Jackson has argued, Tyndall believed the floating matter contained “the germs that cause disease and decay”.

The germ theory of disease

Tyndall thus hesitantly aligned himself with the “germ theory” of disease, which was still highly contested at the time. The germ theory held that epidemic disease was spread by microorganisms that could be carried through the air and so enter people’s bodies.

Through his experiments, Tyndall believed he had added a new source of evidence for explaining the cause of disease and decay. But his experiments also pointed towards a possible way to stop or reduce the spread of such disease.

While organic dust could not be blown away or somehow ejected from the air, Tyndall showed it could be filtered out through cotton wool. Further experiments showed the filtering process was most effective when applied to human breathing.

The practical application of the experiments seemed obvious:

If a physician wishes to hold back from the lungs of his patient, or from his own, the germs by which contagious disease is said to be propagated, he will employ a cotton wool respirator … Such respirators must, I think, come into general use as defense against contagion.

Tyndall was heavily criticised by the London medical community for overstepping the boundaries of his scientific expertise. However, he continued his experiments with “floating matter”.

Applying his research, he developed a much-improved gas mask for firefighters. He also created techniques for preserving food and for sterilisation through discontinuous heating, a process now known as Tyndallisation.

Tyndall died in 1893. By that time the germ theory of disease was widely accepted, in large part due to Tyndall’s experiments, and today it is entirely taken for granted.

It also shapes our understanding of COVID-19 and how we go about mitigating the spread of the disease, such as by using cotton masks not too different from the ones Tyndall advocated producing 150 years ago.

– ref. How a 150-year-old experiment with a beam of light showed germs exist — and that a face mask can help filter them out – https://theconversation.com/how-a-150-year-old-experiment-with-a-beam-of-light-showed-germs-exist-and-that-a-face-mask-can-help-filter-them-out-136391