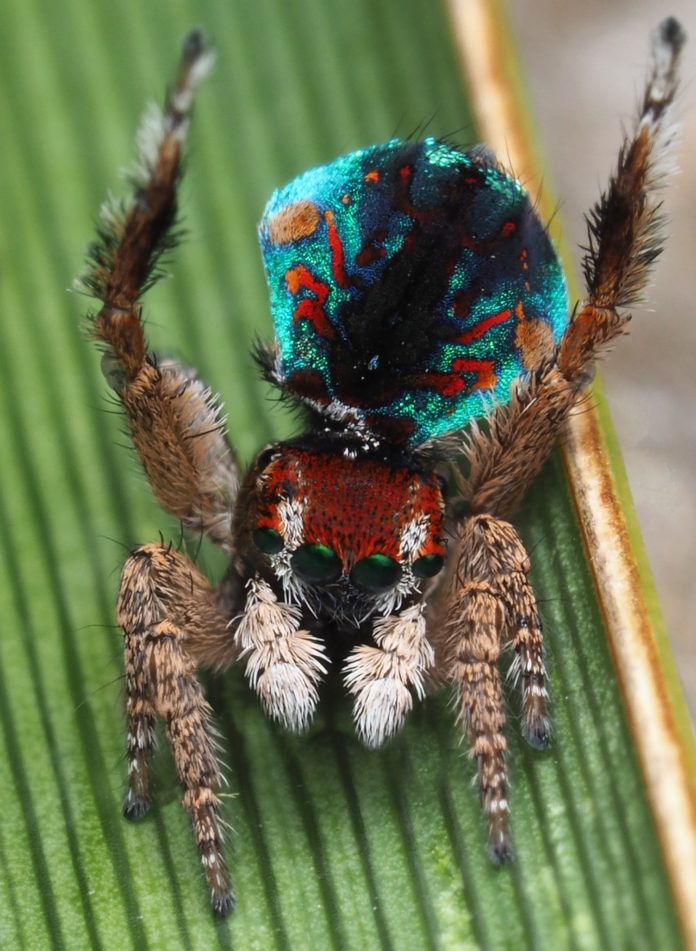 After I found my first peacock spider in the wild in 2016, I was hooked. Three years later, I was travelling across Australia on a month-long expedition to document and name new species of peacock spiders.

Like peacocks, the mature male peacock spiders display their vibrant colours in elegant courtship displays to impress females. They often elevate and wave their third pair of legs and lift their brilliantly coloured abdomens – like dancing.

Up until 2011, there were only seven known species of them. But since then, the rate of scientific discovery has skyrocketed with upwards of 80 species being discovered in the last decade.

Thanks to my trip across Australia and the help from citizen scientists, I’ve recently scientifically described and named seven more species from Western Australia, South Australia and Victoria. This brings the total number of peacock spider species known to science up to 86.

Spider hunting: a game of luck

Citizen scientists – other peacock spider enthusiasts – shared photographs and locations of potentially undocumented species with me. I pulled these together to create a list of places in Australia to visit.

I usually find spider hunting to be a relaxing pastime, but this trip was incredibly stressful (albeit amazing).

The thing about peacock spiders is they’re mainly active during spring, which is when they breed. Colourful adult males are difficult – if not impossible – to find at other times of year, as they usually die shortly after the mating season. This meant I had a very short window to find what I needed to, or I had to wait another year.

Even when they’re active, they can be difficult to come across unless weather conditions are ideal. Not too cold. Not too rainy. Not too hot. Not too sunny. Not too shady. Not too windy. As you can imagine, it’s largely a game of luck.

I arrived in Perth, picked up my hire car and bought a foam mattress that fitted in the back of my car – my bed for half of the trip. I stocked up on tinned food, bread and water, and I headed north in search of these tiny eight-legged gems.

My first destination: Jurien Bay. I spent the whole day under the hot sun searching for a peculiar, scientifically unknown species that Western Australian photographer Su RamMohan had sent me photographs of. I was in the exact spot it had been photographed, but I just couldn’t find it!

The sun began to lower and I was using up precious time. I made what I now believe was the right decision and abandoned the Jurien Bay species for another time.

I hunted tirelessly with my eyes fixed on the ground searching for movement. In a massive change of luck from the beginning of my trip, it seemed conditions were (mostly) on my side.

With the much-appreciated help of some of my field companions from the University of Hamburg and volunteers from the public, a total of five new species were discovered and scientifically named from Western Australia.

Two days after returning from Western Australia, I headed to the Little Desert National Park in Victoria on a Bush Blitz expedition, joined by several of my colleagues from Museums Victoria.

I’d thought the landscape’s harsh, dry conditions were unsuitable for peacock spiders, as most described species are known to live in temperate regions.

To my surprise, we found a massive diversity of them, including two species with a bigger range than we thought, and the discovery of another species unknown to science.

This is the first time two known species – Maratus robinsoni and Maratus vultus – had been found in Victoria. Previously, they had only been known to live in eastern New South Wales and southern Western Australia respectively.

Read more: Don’t like spiders? Here are 10 reasons to change your mind

Our findings suggest other known species may have much bigger geographic ranges than we previously thought, and may occur in a much larger variety of habitats.

And our discovery of the unknown species (Maratus inaquosus), along with another collected by another wildlife photographer Nick Volpe from South Australia (Maratus volpei) brought the tally of discoveries to seven.

What’s in a name?

Writing scientific descriptions, documenting, and naming species is a crucial part in conserving our wildlife.

Read more: Spiders are a treasure trove of scientific wonder

With global extinction rates at an unprecedented high, species conservation is more important than ever. But the only way we can know if we’re losing species is to show and understand they exist in the first place.

These names allow us to communicate important information about these animals to other scientists, as well as to build legislation around them in the case there are risks to their conservation status.

I plan on visiting some more remote parts of Australia in hopes of finding more new peacock spider species. I strongly suspect there’s more work to be done, and more peacock spiders to discover.

– ref. I travelled Australia looking for peacock spiders, and collected 7 new species (and named one after the starry night sky) – https://theconversation.com/i-travelled-australia-looking-for-peacock-spiders-and-collected-7-new-species-and-named-one-after-the-starry-night-sky-135201

By declaring a climate emergency Jacinda Ardern needs to inspire hope, not fear

Born to be wild — revelling in the design and desire...

Scientists should welcome charges against agency over Whakaari/White Island — if...

What’s the difference between viral shedding and reinfection with COVID-19?