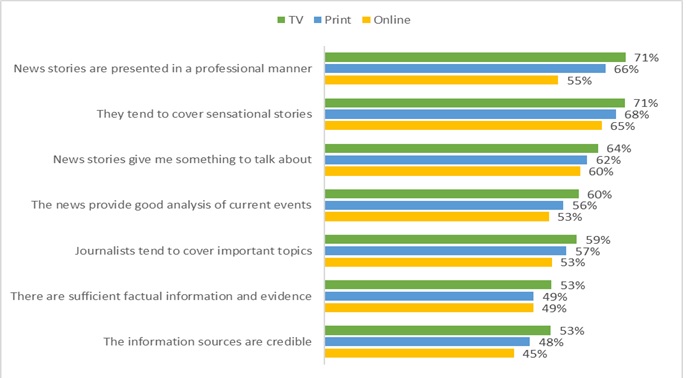 Source: The Conversation (Au and NZ) – By Caroline Fisher, Assistant Professor in Journalism, University of Canberra

The COVID-19 global pandemic has seen news consumption rise in Australia. Audiences for TV news are up and Australians are spending more time on news websites seeking reliable information about the virus and the social and economic consequences of our policy responses.

This makes trust in the media more imperative than ever.

Researchers at the Queensland University of Technology and the University of Canberra have undertaken a survey of 1,045 Australians to gauge levels of trust and mistrust in news and what influences it.

The most trusted voices in news

We found people trust the news they personally consume more than the news in general, and that trust in news was higher than trust in business or government, although lower than trust in friends and educational institutions.

Our participants deemed television the most credible source of information that provides good analysis of current events. Online news sources (including online only and mainstream media) were not viewed to be as credible or professional as traditional offline media.

Some brands were more trusted than others. Trust in established news brands and public broadcasters was highest. Measured on a scale of 1-5 with 5 being the highest, ABC TV (3.92) and radio (3.90) ranked highest, followed by SBS TV (3.87).

Declaring conflicts of interest is important

To find out why people do or don’t trust the news, we asked them to rank a range of possible influences.

Factors that promoted mistrust in news included a past history of inaccurate stories, opinionated journalists or presenters, a lack of transparency, sensationalism and excessive advocacy on behalf of particular points of view.

The single most significant measure that would restore trust in news brands was journalists declaring any conflicts of interest or biases with regards to particular stories. These measures were supported most by both trusters and mistrusters of news.

The negative impact of perceived bias and conflicts of interest appears consistently in studies about trust in news. News outlets need to take this seriously.

Hiring more journalists and social media are not the answers

Our research also reveals some interesting contradictions in how to improve trust in the media.

On the one hand, there was a clear desire for more in-depth reporting. However, most respondents simultaneously showed less support for media outlets employing more journalists. This suggests audiences want better-quality journalism, but not necessarily more of it.

Read more: On an average day, only 1% of Australian news stories quoted a young person. No wonder so few trust the media

In fact, employing more journalists and being more active on social media were deemed the least likely to increase public trust in media – two approaches that feature prominently in the business models of most news organisations.

As with institutional trust more generally, there is also a “trust divide” between educated elites and the wider population when it comes to the news media. Older people also have higher trust in news than younger people.

Trust in news is hard to restore

In particular, mistrusters do not see employing more journalists or reporters using more social media as a way to boost trust. Doing either of those things would only increase the circulation of news they already mistrust.

This suggests it is harder to improve trust of those who are already sceptical and mistrustful of news. This is an important message for news outlets to take on board. Once lost, trust in news is harder to restore.

– ref. How can we restore trust in media? Fewer biases and conflicts of interest, a new study shows – https://theconversation.com/how-can-we-restore-trust-in-media-fewer-biases-and-conflicts-of-interest-a-new-study-shows-135680