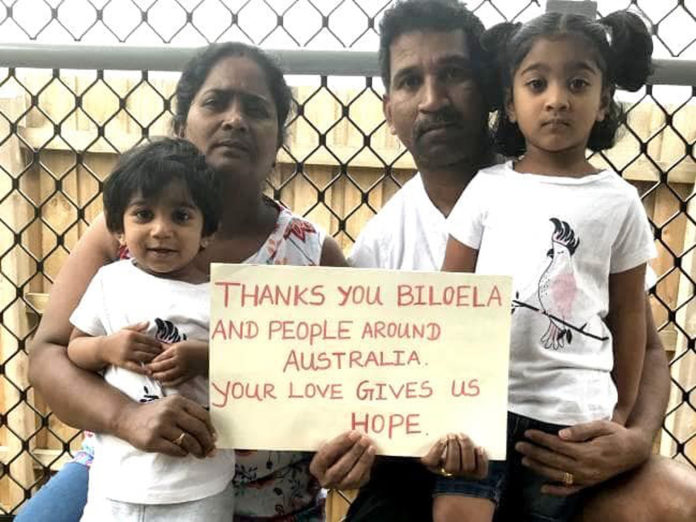 The Sri Lankan family that had been living in Biloela, Queensland, before being held in detention on Christmas Island has had a partial victory in the Federal Court, with a ruling that the youngest child was not granted “procedural fairness”.

This is not yet a decision about whether the family will be allowed back into the community, but leaves the way open for the family to continue its bid to stay in Australia.

What was the judgment?

The case involves a two-year-old girl, Tharunicaa, born in Australia to Sri Lankan Tamil parents. (The couple also has a four-year-old daughter, Kopika.) The family have been in immigration detention on Christmas Island since a dramatic injunction stopped their deportation back to Sri Lanka in August 2019.

The judgment made today by Justice Moshinsky found Tharunicaa was not given “procedural fairness” when her request for permission to apply for a protection visa was rejected.

Read more: How the Biloela Tamil family deportation case highlights the failures of our refugee system

Tharunicca’s parents and sister had previously had their claims for protection refused. Appeals to the courts about the fairness of the process in their cases were not successful.

Tharunicaa was born after her parents had made their visa application. Even though she was born in Australia, her parents’ arrival in Australia by boat as asylum seekers means the law designates her to be an “unauthorised maritime arrival”. Legally, this means she is not able to make an application for a protection visa unless the minister for immigration personally allows her to under section 46A of the Migration Act.

Lawyers for Tharunicca argued the minister should allow her to make that application and have her own claims for asylum considered as there were significant concerns she and her family would face persecution if returned to Sri Lanka.

In exercising the section 46A power, the judge stated, the minister has to consider whether to exercise his power to “lift the bar” to allow her to apply. The question in this case was whether he had to observe procedural fairness in carrying out that power.

Read more: View from The Hill: Morrison and Dutton block their ears and grit their teeth over Tamil family

Evidence provided by the Department of Home Affairs and lawyers for Tharunicaa was examined in detail.

The judge found the department had prepared a detailed 11-page brief on the family’s background and claims for protection, which was given directly to Immigration Minister David Coleman in May 2019. The brief provided the minister with several options for him to circle. However, this was not done.

The judge found the minister had made no clear final decision on that brief. However, even though no decision was made, the minister was clearly still considering whether to allow the child to make a visa application.

In August 2019, an officer in the Department of Home Affairs wrote to the lawyers that the request for ministerial intervention had been assessed and the request did not meet the guidelines required for a referral to the minister. The department then “finalised this request without referral”.

Justice Moshinky found the department had not afforded “procedural fairness” to the child, in that it had not allowed her lawyers the opportunity to provide any evidence or submissions on her behalf.

The judge has asked the lawyers for the government and the family to discuss and agree on what orders should be made to allow Tharunicaa’s request to be considered properly.

What does it mean for the family?

The decision means the case is ongoing. The injunction preventing the removal of the family will continue.

The judge has asked that the parties agree on orders within seven days. If they can’t agree on the orders, he has asked them to provide separate submissions to him within 14 days. He will make orders after that.

– ref. Explainer: what does the Federal Court decision on the Tamil asylum-seeker family mean? – https://theconversation.com/explainer-what-does-the-federal-court-decision-on-the-tamil-asylum-seeker-family-mean-136504