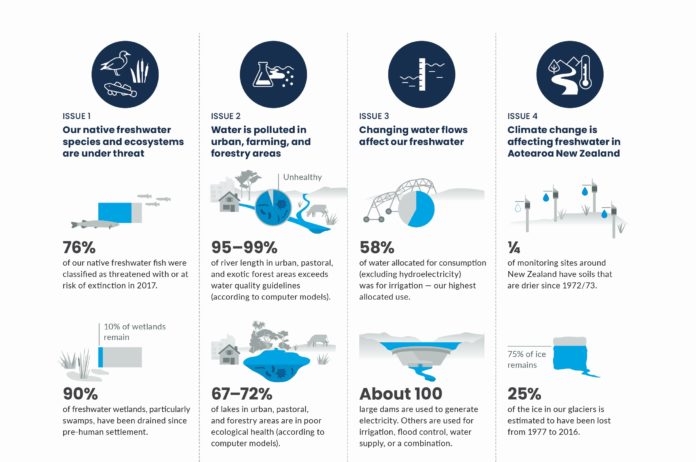 Source: The Conversation (Au and NZ) – By Troy Baisden, Professor and Chair in Lake and Freshwater Sciences, University of Waikato

The latest environmental report on New Zealand’s lakes and rivers reiterates bleak news about the state of freshwater ecosystems, and warns that climate change will exacerbate existing threats.

Almost all New Zealand rivers running through urban and farming areas (95-99%) carry pollution above water quality guidelines, while most of the nation’s wetlands (90%) have been drained, and many freshwater fish species (76%) are threatened or at risk.

The most significant pressures on freshwater ecosystems fit into four issues:

Climate change gets more attention than in earlier assessments, reflecting the fact that glaciers are already shrinking and soils are drying out.

What whitebait tell us about freshwater fish under stress

The latest assessment is an update on a freshwater report in 2017 and the comprehensive Environment Aotearoa 2019. It reiterates issues we’ve seen before, but begins to implement recent recommendations by the Parliamentary Commissioner for the Environment (PCE) calling for a stronger link between data and environmental management.

Biological impacts are at the forefront of this latest assessment. It shows that a wide range of freshwater organisms are at risk. The statistics for freshwater fish are the most concerning, with three quarters of the 51 native species already either threatened or at risk of extinction.

The report uses a particular group of native fish (īnanga, or galaxids) to connect the multiple impacts humans have, across a range of habitats at different life stages.

Īnanga are better known as whitebait, a delicacy that is a mix of juveniles from six different species caught as they migrate from the sea to rivers.

Īnanga of different ages and species live in different habitats, so they can be used to represent the issues facing a range of freshwater fish across ecosystems. The main stress factors include altered habitat, pollution and excess nutrients, water use for irrigation and climate change.

Climate change is expected to exacerbate existing stresses native organisms like īnanga face and protecting their habitat means understanding how much it will reduce water flows and create hotter and drier conditions.

The use of organisms to assess environmental change, including climate change impacts, is an obvious but important step. It makes it possible to consider climate change in a way that meets the Environmental Reporting Act’s requirement to report on a “body of evidence”.

This latest report responds to the PCE’s concerns about gaps in our knowledge, which were raised in the Environment Aotearoa 2019 assessment. The new strategy for filling large holes in our knowledge has three priorities: knowing and monitoring what we have, what we may lose, and where or how we can make changes.

The report highlights that mātauranga Māori, the process of using indigenous knowledge about the environment, can fill some gaps in data or add insights. Other methods and models, such as nutrient budget scenarios, also deserve consideration.

There is some good news as well. Some pollution concerns may be minor or limited to very small areas. This includes several so-called emerging contaminants, such as fire retardants, which have been discovered in groundwater around airfields but are now banned or restricted.

The second piece of good news is that new ways of studying the environment can help fill major gaps. For example, lakes may be more stable indicators of freshwater health than rivers and streams, but only 4% (about 150) of New Zealand’s 3,820 larger lakes are regularly monitored by regional councils.

For almost 300 lakes, the report includes an index of the plants that live in them, and for more than 3000 there is now an established method of estimating lake water quality. Further information is becoming available, using updated estimations, satellite data for the last 20 years and sediment cores to reconstruct environmental conditions over the last few hundred years.

Unfortunately, the data from lakes confirms the general trend of freshwater decline, but at least the multiple forms of complementary information should help us to manage New Zealand’s freshwater ecosystems better.