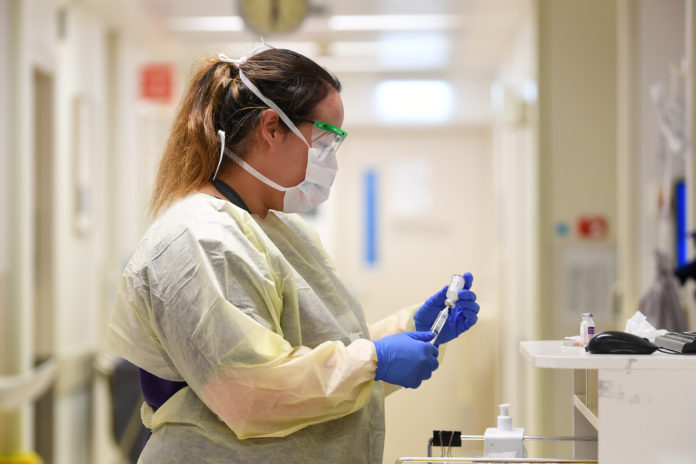 Last week, Health Minister Greg Hunt issued a stark warning that the deliberate transmission of COVID-19 could be punishable by a lifetime prison sentence.

Hunt said he sought legal advice from the attorney-general’s department, which said such an action was an offence under the general criminal laws in every state and territory.

The most serious of these offences may carry maximum penalties up to imprisonment for life, if somebody was to take a step which led to the death of a healthcare worker. If it were a deliberate transmission.

He also said it was against the law to

cause someone else to fear that they are having transmitted to them the virus, for example by coughing on them.

Hunt was responding to reports of people abusing healthcare staff and police by coughing and spitting on them.

We understand these are extreme times, but governments should not rush to announcements that transmitting COVID-19 could be subject to criminal prosecution, especially with the risk of a life sentence.

What are the issues with a law like this?

In general, the passage and enforcement of all laws must be tested for “necessity”. This implies two things: the measure corresponds to a pressing social need and is proportionate to the legitimate aim being pursued.

There is also a distinction between public health and public order laws. The current emergency laws provide exceptional powers to require certain behaviours to protect public health, not to combat public disorder, which is dealt with under general criminal laws.

The danger of adding to general criminal laws in a crisis is the potential over-criminalisation of the general public.

There have been some reports of public disorder during the current pandemic, but as yet, there is no evidence of widespread deliberate and intentional transmission of COVID-19.

The application of the law in cases like this is also uncertain and unclear. For example, what do Hunt’s words, “take a step” and “deliberate”, mean in this context? How would it be proved that coughing on someone led to the death of a healthcare worker?

First, it would be difficult to identify a specific individual as the source of a possible infection, particularly since the virus can remain on surfaces for several days.

Then there is the question of intent. As a matter of law, it is not merely proof of deliberate (rather than accidental) conduct that creates criminal liability, but also someone’s state of mind at the time of the action and whether it is in the public interest to prosecute.

This is a much more complex issue in public health cases.

In 2013, a circus acrobat, Godfrey Zaburoni, was jailed for deliberately infecting his girlfriend with HIV through unprotected sex. But his conviction was quashed by the High Court, which stated

a person’s awareness of the risk that his or her conduct may result in harm does not … support the inference that the person intended to produce the harm.

There is a very fine distinction between deliberately infecting someone with a disease – particularly where the chance of infection is low (as it is with HIV) – and taking a risk that could infect someone.

Moreover, assaulting or spitting at public health workers is already a crime under existing laws, and doing so during a health emergency can be taken into account on sentence. So, Hunt’s announcement has no practical effect beyond mere rhetoric.

The threat of prosecuting people for deliberately transmitting the virus may also add to people’s fears during an uncertain time. For instance, people could be worried about the legal implications of coughing near a healthcare worker and delay getting medical help as a result.

In addition, large on-the-spot fines could also disproportionately affect certain segments of society, such as the poor or homeless.

The need to decriminalise transmission of viruses

Advocates in other countries are seeking to decriminalise the transmission, exposure or non-disclosure of viruses like HIV, arguing such laws can be unfairly or unevenly applied.

In the United Kingdom, a hairdresser, Daryll Rowe, was sentenced to life in prison two years ago for intending to infect or attempting to infect 10 men with HIV.

In the trial, the prosecution relied on the number of his sexual partners, his deception about his HIV status, the finding of tampered condoms and the vile text messages he sent after sexual encounters to prove its case that he intentionally infected the other men.

But there was also evidence that he was otherwise trying to control his infectiousness through alternative remedies and, notably, that he had limited contact with sexual partners rather than relationships, meaning there was less regular contact and less chance of transmission.

As a result, he was convicted of intentional infection, even though there was evidence he was otherwise trying to avoid this.

Read more: Daryll Rowe guilty – but is criminal law the right way to stop the spread of HIV?

The criminal law in both the UK and Australia does not provide a defence where others voluntarily assume risk. This could put all promiscuous people at risk of conviction in cases like this, even though such actions themselves are not crimes.

The same theory could apply to COVID-19. Anyone who does not maintain appropriate social distancing could be at risk of conviction under these laws and subject to an overly harsh punishment.

We need a public health, not criminal law, approach

Public health emergencies may bring criminal sanctions for non-compliance of restrictions like social distancing and quarantining – but even here, some have expressed concern about the scope and enforcement of the new laws.

Already, the pandemic is placing significant strain on police, courts and prisons.

Governments should allocate adequate resources to protect healthcare workers, rather than promoting the application of extreme laws that will be difficult to prove and waste resources attempting to do so when the current emergency laws are more than sufficient.

– ref. Transmitting COVID-19 to another person could send you to prison for life. Here’s why this is worrisome – https://theconversation.com/transmitting-covid-19-to-another-person-could-send-you-to-prison-for-life-heres-why-this-is-worrisome-135957