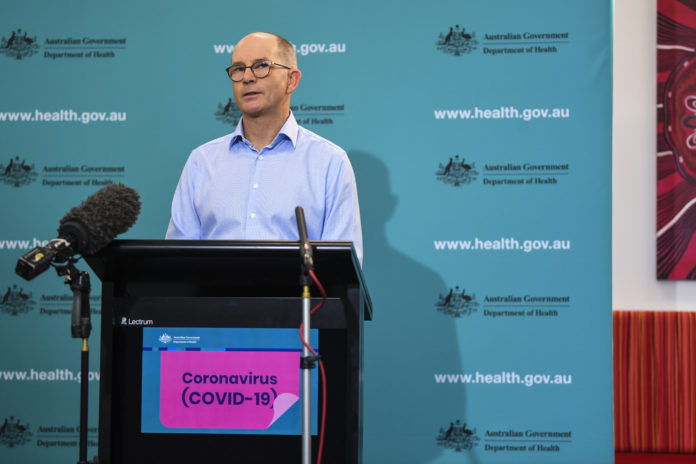 You might have seen headlines in the last day or so suggesting Australia is on the “cusp” of defeating the coronavirus pandemic.

I’m here to say: make sure you read beyond the headlines. The reality (as acknowledged by many of the news reports, if you read them in full) is that while Australia is doing well, the social distancing measures will likely be in place for a good while yet.

Read more: Coronavirus: what causes a ‘second wave’ of disease outbreak, and could we see this in Australia?

On the cusp of what-now?

The “cusp” headlines were based on comments made on Friday by deputy chief medical officer Paul Kelly, who told reporters “the average number of people that are infected by one person is a key component of understanding the virus and how it spreads”. He said:

Ideally, where you want to be is below one, so less than one other person being infected after a person themselves had the infection. And once you get to that point the virus dies out or the epidemic dies out […]

And so at the moment we’re probably on the cusp of that in Australia.

But an important part of his comment is what he said next:

Now whether that’s where we are going to be in several weeks’ or months’ time remains to be seen.

Paul Kelly is saying something quite specific here. He’s saying the early signs are encouraging and he is giving some positive feedback to people.

But his “cusp” comment is about a very specific aspect of infectious disease management: the R ₀ (pronounced R-nought).

The basic R ₀ tells us about how transmissible a diseases is when everyone in the population is susceptible and there are no public health measures in place to control the disease. So this basic R ₀ is an inherent property of the infectious agent.

There’s also something called the effective R ₀, which is how the virus really spreads in the population. This effective R ₀ takes into account any immunity that people may have in the the population as well as public health measures implemented to slow the spread of a disease.

When you get the effective R ₀ to less than one then you are on the way to seeing the virus disappear from the population. That’s because each person is spreading it to less than one person (on average).

That’s what Paul Kelly was explaining. Our social distancing measures are working and we are seeing the effective R ₀ under one, which means were are on the way to a really good outcome.

But it’s not quite true to say we are on the cusp of defeating the epidemic in Australia.

At this stage of the the epidemic, a large number of cases have been imported from overseas. So the great progress we are seeing now on the effective R ₀ may be because of the border controls and stopping transmission from cruise ships.

That’s good but you need to remember that to this point we have largely focused on testing those who have recently come from overseas or been in contact with someone recently returned.

It’s possible and likely that community transmission is occurring (where people are getting infected by someone who isn’t recently returned from overseas or a close contact of such a person).

Because our testing hasn’t focused on community transmission, we don’t know a lot about what’s happening in this space. However, we are now seeing testing criteria rapidly expand throughout the country so we will start to find out more about this in coming weeks.

Good news but we need to keep going

I do think Australia deserves some positive encouragement. We have done well, by and large, on the social distancing and and we need to keep it up over Easter. Don’t undo all the hard work and all the gains we have made so far.

But whatever you do, don’t read these “cusp” headlines and walk away with the mistaken impression that we are on the cusp of the epidemic in Australia being over. That’s not where we are at right now.

As Paul Kelly said in the same press conference:

on average, what we know about this virus if we don’t have these social distancing measures, one person can lead to 400 other cases within a month.

Social distancing is one of our most important measures in stemming the epidemic. Australia needs to keep up the good work.

Read more: Grattan on Friday: Australia’s coronavirus debate turns to the way out

– ref. Headlines promise Australia’s on the ‘cusp’ of defeating coronavirus. We’re not and it’s too soon to relax restrictions – https://theconversation.com/headlines-promise-australias-on-the-cusp-of-defeating-coronavirus-were-not-and-its-too-soon-to-relax-restrictions-136143