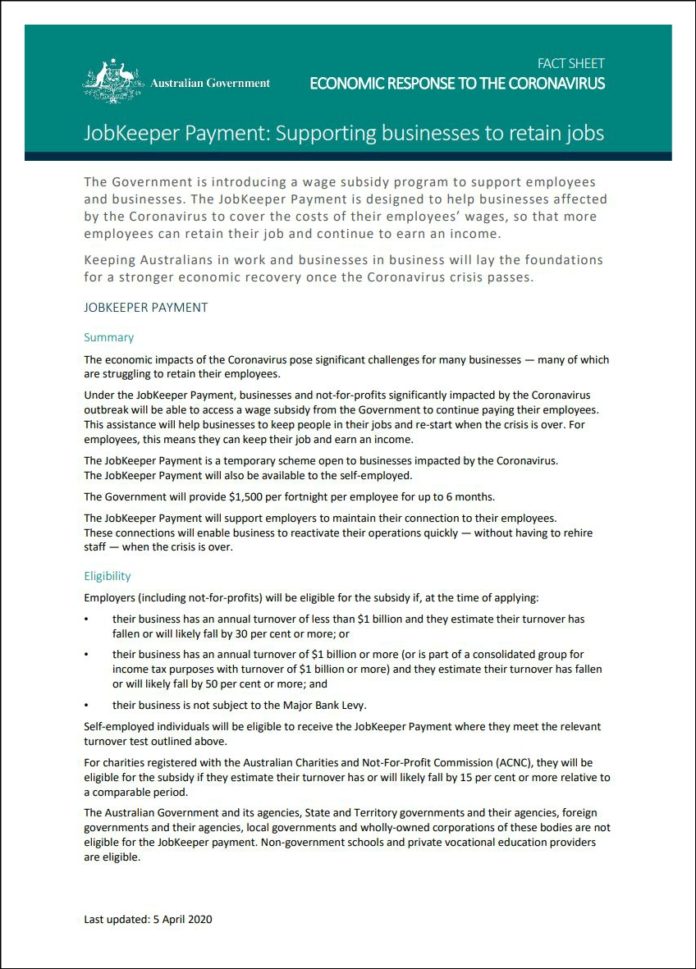 The centerpiece of the Commonwealth government’s COVID-19 economic stimulus program is JobKeeper. Priced at A$130 billion, it will pay eligible employers $1,500 per fortnight for each eligible employee for up to six months.

The aim, according to the government fact sheet, is to

But excluded from the scheme are workers on temporary visas (except for New Zealand citizens on Special Category Subclass 444 visas – they’re included).

This exclusion is wrong for four reasons.

1. It penalises the businesses that employ temporary workers

The exclusion of temporary visa holders discriminates against the businesses that employ them.

Given there are close to 900,000 temporary visa holders with work rights (excluding New Zealand citizens) the discrimination will have a serious impact.

It will be particularly severe in industries that significantly rely on temporary migrants: among them hospitality (international students), agriculture (working holiday makers), health and aged care (workers on Temporary Skill Shortage visas).

The exclusion of temporary visa holders from JobKeeper will bring about distortions within and between industries. It will likely result in the closure of businesses that rely upon temporary migrants.

This principle underpins Australia’s Fair Work Act which treats migrant workers as within its scope.

JobKeeper, which provides a workplace benefit through wage subsidies, departs from this principle.

Not only does it set a dangerous precedent, it is a particularly egregious breach.

Denial of the JobKeeper payment will mean the loss of jobs and livelihoods for many or most temporary visa holders.

Some will be forced to attempt to return to their countries of origin, which in some cases are less safe than Australia.

Among them are Italian working holiday visa holders.

3. Many of those affected are members of the community

Temporary visa holders are only temporary in the sense that they have a limited right to stay.

Swinburne University’s Peter Mares has characterised Australia’s shift to temporary migration as “permanent” in two senses: it is an enduring change, and it has resulted in temporary visa holders residing in Australia for extended periods of time.

Philosopher Joseph Carens has rightly argued that such extended periods of residence provide a basis for community membership, given the contributions given and connections made, regardless of migration status.

This ought not be hard to understand: most overseas Australians would consider their country of residence to be their home.

The position of overseas Australians (of which there are hundreds of thousands) suggests another important perspective: the Golden Rule.

How would we view the actions of foreign governments that insisted that overseas Australians “go home” if they had insufficient funds due to COVID-19 restrictions imposed by these very governments?

4. It undermines the fight against COVID-19

Temporary visa holders will increasingly swell the number of homelessness.

It is hard to “stay at home” if you don’t have one. Financial desperation will drive some to continue working even if unwell.

The recovery of higher education will be slowed down if international students are impoverished and unable to pay the fees necessary to continue their studies.

Temporary migrant workers ought to be part of JobKeeper, just as are other Australian residents and New Zealanders on temporary visas.

Excluding them breaches their fundamental rights, fails to recognise the community membership of many of them, and it will undermine Australia’s efforts to fight COVID-19.

What would Amy Coney Barrett, Trump’s expected pick for the Supreme Court, mean for abortion rights in the US?