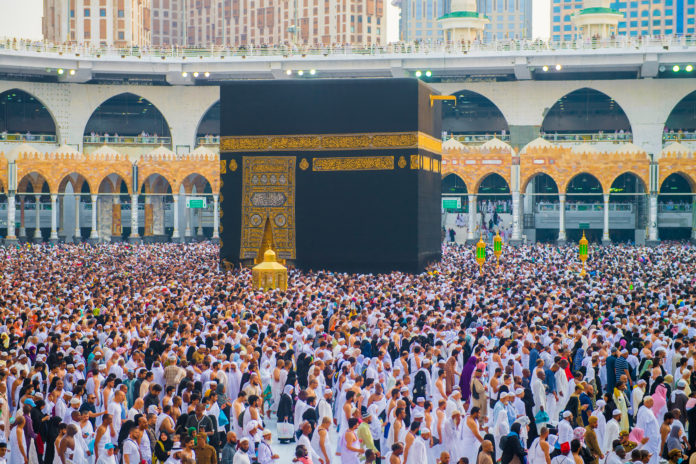 Source: The Conversation (Au and NZ) – By Mehmet Ozalp, Associate Professor in Islamic Studies, Director of The Centre for Islamic Studies and Civilisation and Executive Member of Public and Contextual Theology, Charles Sturt University

As the world faces the greatest disruption of our lifetimes, Muslims throughout the world are also grappling with the repercussions of the coronavirus pandemic.

Muslims have relatively large families and tend to maintain extended family relations. Prophet Muhammad encouraged Muslims to keep strong family ties. The Quran inspires Muslims to be generous to kin (16:90) and treat the elderly with compassion (17:23).

These teachings have resulted in Muslims either living together as large families or keeping regular weekly visits and gatherings of extended family members. Many Muslims feel conflicted about the need to apply social distancing on one hand and the need to be close to family and relatives for comfort and support. Tighter restrictions on movement in some parts of Australia (NSW and Victoria) mean Muslims, like everyone else, are not allowed to visit extended family anymore.

Read more: What actually are ‘essential services’ and who decides?

One of the first changes brought about by social distancing has been to the Muslim custom of shaking hands followed by hugging (same gender) friends and acquaintances, especially in mosques and Muslim organisations. After a week or two of hesitation in March, the hugging completely stopped, making Muslims feel dismal.

Visiting the sick is considered a good deed in Islam. However, in the case of COVID-19, such visits are not possible. Checking up on those who are sick with phone calls, messages and social media is still possible and encouraged.

Cleanliness is half of faith

Islam has been encouraging personal hygiene for centuries. The Quran instructs Muslims to keep their clothes clean in one of the earliest revelations (74:4), remarking “God loves those who are clean” (2:222).

More than 14 centuries ago, Prophet Muhammad emphasised “cleanliness is half of faith” and encouraged Muslims to wash their hands before and after eating, bath at least once a week (and after marital relations), brush their teeth daily, and to groom their nails and private parts.

Read more: In spite of their differences, Jews, Christians and Muslims worship the same God

Additionally, Muslims have to perform a ritual ablution before the five daily prayers. The ablution involves washing hands up to the elbows, including interlacing of fingers, washing the face and feet, and wiping the hair.

While these do not completely prevent the spread of disease, they certainly help reduce the risk.

An interesting detail is that Muslims are required to wash their genitals after using the toilet. Even though Muslims use toilet paper, they are required to finish cleaning with water. This requirement led to some Muslims installing bidet sprayers in their bathrooms.

Closure of mosques and Friday services

Congregational prayers in mosques are important for Muslims in instilling a sense of being in the presence of the sacred, and a sense of being with other believers. Accordingly, they line up in rows with shoulders touching. This arrangement is extremely risky during a pandemic. Australian mosques are now closed because of coronavirus.

Stopping Friday prayers on a global scale has not occurred since it was introduced by Prophet Muhammad in 622, after he migrated to the city of Medina from the persecution he and his followers endured in Mecca.

Iran was the first to ban Friday prayers on March 4. While countries like Turkey and Indonesia tried to continue Friday prayers with social distancing, it did not work, and soon the entire Muslim world closed mosques for prayer services.

Fortunately for Muslims, the closure of mosques does not mean they stop daily prayers altogether. In Islam, individual prayers and worship play a greater role than communal ones. Muslims can pray five times a day wherever they are, and often home is a place where most praying takes place.

Effect on Ramadan and the annual pilgrimage to Mecca

Two of the five pillars of Islamic practice are the fasting in Ramadan and the annual pilgrimage to Mecca.

Ramadan is only three weeks away. It starts in the last week of April and goes for a month. During this month, Muslims refrain from eating, drinking and marital relations from dawn to sunset on each day of the month. This part will not be affected by COVID-19.

Read more: Millions of Muslims prepare to perform the hajj amid calls for a boycott

What is affected are the evening breaking of fast dinners (iftar) and daily evening congregational prayers (tarawih). Muslims generally invite their friends and family members to these dinners. In Western countries, the invitations include non-Muslim acquaintances as well. Islamic organisations have already announced the cancellation of iftar dinners.

The three-day end of Ramadan festive celebrations (eid) will also be limited to family that live together.

The impact on pilgrimage is far greater.

The minor (and optional) Islamic pilgrimage (umrah) happens throughout the year, intensifying near Ramadan. With Iran a hot spot for coronavirus, Saudi Arabia suspended entry to Iranian and all other pilgrims as early as February 27.

The main pilgrimage (hajj) season occurs in late July. Although there is the possibility of the spread of the virus slowing by July, a pilgrimage involving more than two million people from just about every country on earth would almost certainly flame the virus into a second wave. Saudi Arabia is likely to cancel the main pilgrimage for 2020.

In the 14 centuries of Islamic history, pilgrimage has not been undertaken several times because of war and roads not being safe. But this is the first time in pilgrimage may be called off due to a pandemic.

As pilgrims reserve their spot and pay the full fee months ahead, the cancellation of hajj would result in losses of savings for millions of Muslims and cause massive job losses in the pilgrimage industry.

The balance between precaution and reliance on God

An early debate in Muslim circles around coronavirus has been a theological one. Muslims believe God created the universe and continues to actively govern its affairs. This would mean the emergence of the virus is an active creation of God.

So like some other religious groups, some Muslims argue that coronavirus was created by God to warn and punish humanity for consumerism, destruction of the environment and personal excesses. This means fighting the pandemic is futile and people should rely (tawakkul) on God to protect the righteous.

Such thinking may help in reducing the sense of fear and panic such a large-scale pandemic poses, but it can also make people unnecessarily complacent.

The vast majority of Muslims counter this fatalistic approach by arguing that while the emergence of the virus was not in human control, the spread of disease certainly is. They remind us that Prophet Muhammad advised a man who did not tie his camel because he trusted in God: “tie the camel first and then trust in God”.

Prophet Muhammad sought medical treatment and encouraged his followers to seek medical treatment, saying “God has not made a disease without appointing a remedy for it, with the exception of one disease—old age”.

If you hear of an outbreak of plague in a land, do not enter it; if the plague outbreaks out in a place while you are in it, do not leave that place.

Sometimes affliction inevitably comes our way. The Quran teaches Muslims to see life’s difficult circumstances as a test — they are temporary hardships to strengthen us (2:153-157). Such a perspective allows Muslims to show resilience in times of hardship and tribulation, with sufficient strength to make it to the other side intact.

In times like this, some people will inevitably lose their wealth, income and even their lives. Prophet Muhammad advised the grieving that property lost during tribulations will be considered charity, and those who die as a result of pandemics will be considered martyrs of paradise.

As Muslims continue to deal with the coronavirus pandemic, they, like everyone else, are wondering how their lives might be changed afterwards.