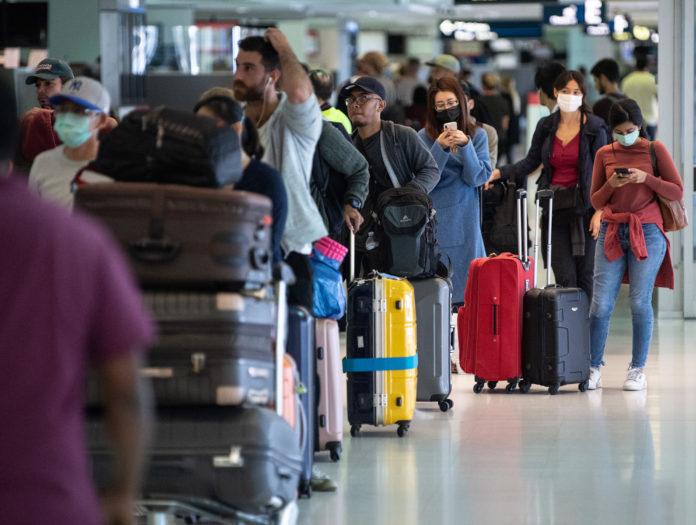 All Australians arriving from overseas will be quarantined in hotels or other facilities under strict supervision for a fortnight, under the latest crackdown in the battle against the coronavirus.

Announcing the measure after Friday’s meeting of the national cabinet of federal and state leaders, Scott Morrison said people would be quarantined where they arrived, even if this was not their ultimate destination.

The current requirement has been for arrivals to self-isolate for two weeks.

The states will administer the quarantine and pay for it but the Australian Defence Force and Australian Border Force will assist, as the attempt to deal with imported cases tightens.

The ADF will bolster police efforts in visiting the homes of people who are in isolation and will report to local police on whether the person is at home.

But the ADF personnel will not have legal power to take action against people breaching conditions – that rests with state and territory police.

The ADF will be there “to put boots on the ground, to support [state authorities] in their enforcement efforts,” Morrison said.

Read more: Grattan on Friday: Which leaders and health experts will be on the right side of history on COVID-19 policy?

The government has made the move – starting from Saturday night – to strongly-supervised quarantine because incoming travellers present the highest risk.

Figures before the national cabinet showed about 85% of cases in Australia were overseas-acquired or locally acquired contacts of a confirmed case.

Numbers of people arriving in Australia are drastically down. For example on Thursday there were 7,120 arrivals at airports around the country. This compared with 48,725 a year ago.

Morrison also flagged a third economic assistance package – to be announced as early as Sunday or Monday – which would aim to have companies “hibernate” so they could recommence operations after the crisis has passed.

“This will underpin our strategy as we go to the third tranche of our economic plan,” he said.

“That will include support by states and territories on managing the very difficult issue of commercial tenancies and also dealing ultimately with residential tenancies as well.”

States are now moving to tougher restrictions at different paces. NSW, where the situation is most serious, is closest to a more extensive form of shutdown, with Victoria not too far behind it.

Victorian premier Daniel Andrews repeated that Victoria would at some point move from the present stage two to “stage three”.

There is not public clarity at either federal or state level precisely how the next stage would operate.

Morrison rejected the language of lockdown. “I would actually caution. the media against using the word “lockdown”.

“I think it does create unnecessary anxiety. Because that is not an arrangement that is actually being considered in the way that term might suggest,” he said.

“No decision that we’re taking on the health front that has these terrible economic impacts is being taken lightly. Every day someone is in a job, for just another day, is worth fighting for”, he said.

He said some businesses would have to close their doors and the government did not want them so saddled with debt, rent and other liabilities that they would not be able to reopen.

Morrison enthused about how Australians had responded to the tougher measures announced this week. “On behalf of all the premiers and chief ministers and myself, the members of the national cabinet, we simply want to say to you, Australia – thank you. Keep doing it. You’re saving lives and you’re saving livelihoods”.

Read more: Politics with Michelle Grattan: Nobel Laureate Professor Peter Doherty on the coronavirus crisis and the timeline for a vaccine

On schools, the states have now bypassed Morrison, who wanted children to keep attending them.

A statement from the national cabinet said: “We are now in a transition phase until the end of term as schools prepare for a new mode of operation following the school holidays.

“While the medical advice remains that it is safe for children to go to school, to assist with the transition underway in our schools to the new mode of operation we ask that only children of workers for whom no suitable care arrangements are available at home to support their learning, physically attend school.”