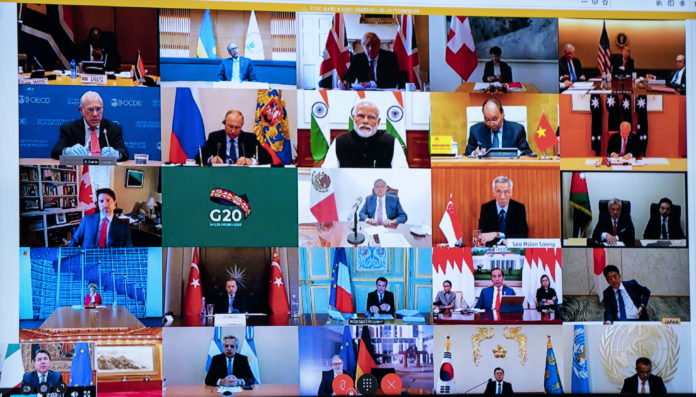 Leaders of the world’s largest economies came together at a virtual G20 this week to “do whatever it takes to overcome the coronavirus pandemic”. But the reality is that global capacity to deal with the greatest challenge to international well-being since the second world war is both limited and fractured.

A G20 statement at the end of a 90-minute hookup of world leaders said the right things about avoiding supply-chain disruptions in the shipment of medical supplies, and their agreement to inject A$8.2trillion into the global economy.

Read more: ‘Where no counsel is, the people fall’: why parliaments should keep functioning during the coronavirus crisis

By all accounts, interactions between the various players were more constructive than previous such gatherings in the Donald Trump era.

However, emollient words in the official statement, in which the leaders pledged a “common front against this common threat”, could not disguise deep divisions between the various players.

The US and China might have acknowledged the need for coordinated action to deal with the pandemic and its economic consequences, but this hardly obscures the rift between the world’s largest economies.

While Trump says he and Chinese President Xi Jinping have a good relationship, the fact remains Washington and Beijing are at loggerheads over a range of issues that are not easily resolved.

These include trade in all its dimensions. And central to that is a technology “arms race”.

Then there is Trump’s persistent – and deliberately provocative – reference to a “Chinese virus”. Beijing has strongly objected to this characterisation.

Overriding all of this is China’s quest for global leadership in competition with the US and its allies. The US and its friends see this quest as both relentless and disruptive.

In its response to the coronavirus pandemic, which originated in China’s Hubei province, Beijing has sought to overcome world disapproval of its initial efforts to cover up the contagion by stepping up its diplomatic efforts.

In this we might contrast China’s approach with that of the Trump administration, which continues to emphasise an inward-looking “America first” mindset.

These nativist impulses have been reinforced by a realisation of America’s dependence on Chinese supply chains. The US imports a staggering 90% of its antibiotics from China, including penicillin. America stopped manufacturing penicillin in 2004.

importance of bringing all of that manufacturing back to America.

Tepid American support for international institutions like the United Nations and its agencies, including, principally, the World Health Organisation, is not helpful in present circumstances.

Trump’s verbal onslaught against “globalism” in speeches to the UN has undermined confidence in the world body and called into question American support for multilateral responses to global crises.

Ragged responses to the coronavirus pandemic are a reminder of the dangers inherent in a world in which global leadership has withered.

In Europe, leaders spent most of Thursday arguing over whether a joint communique would hint at financial burden-sharing to repair the damage to their economies.

Germany and the Netherlands are resisting pressures to contribute to a “coronabonds” bailout fund to help countries like Italy and Spain, hardest hit by the pandemic.

This reluctance comes despite a warning from European Central Bank president Christine Lagarde that the continent is facing a crisis of “epic” proportions.

These sorts of geopolitical tensions are inevitable if the pandemic continues to spread and, in the process, exerts pressures on the developed world to do more to help both its own citizens and those less fortunate.

In an alarming assessment of the risks of contagion across conflict zones, the International Crisis Group (ICG) identifies teeming refugee camps in war-ravaged northern Syria and Yemen as areas of particular concern.

In both cases, medical assistance is rudimentary, to say the least, so the coronavirus would not be containable if it were to get a grip.

In its bleak assessment, the ICG says:

The global outbreak has the potential to wreak havoc in fragile states, trigger widespread unrest and severely test international crisis management systems. Its implications are especially serious for those caught in the midst of conflict if, as seems likely, the disease disrupts humanitarian aid flows, limits peace operations and postpones ongoing efforts at diplomacy.

In all of this, globalisation as a driver of global growth is in retreat at the very moment when the world would be better served by a “globalised” response to a health and economic crisis.

These challenges are likely to far exceed the ability of the richest countries to respond to a global health emergency.

The disbursement of A$8.2trillion to stabilise the global economy will likely come to be regarded as a drop in the bucket when the full dimensions of a global pandemic become apparent.

In the past day or so the United States became the country hardest hit by coronavirus, surpassing China and Italy.

Medical experts contend the spread of coronavirus in the US will not peak for several weeks. This is the reality Trump appears to have trouble grasping.

Leaving aside the response of countries like the US, China, Italy, Spain and South Korea, whose health systems have enabled a relatively sophisticated response to the virus, there are real and legitimate concerns about countries whose healthcare capabilities would quickly become overburdened.

In this category are countries like Pakistan, India, Indonesia and Bangladesh, which is housing some 1 million Rohingya refugees.

Questions that immediately arise following the “virtual” leaders’ summit are:

The short answer to these questions is that the world is less well-equipped to deal with a crisis of these dimensions than it might have been if global institutions were not under siege, as they are.

The present situation compares unfavourably with the G20 responses to the Global Financial Crisis of 2008/9. Then, American leadership proved crucial.

In this latest crisis, no such unified global leadership has yet emerged.

The further splintering of an international consensus and retreat from a globalising world as individual states look out for themselves may well prove one of the enduring consequences of the coronavirus pandemic. This would be to no-one’s particular advantage, least of all the vulnerable.

– ref. Coronavirus shines a light on fractured global politics at a time when cohesion and leadership are vital – https://theconversation.com/coronavirus-shines-a-light-on-fractured-global-politics-at-a-time-when-cohesion-and-leadership-are-vital-134666