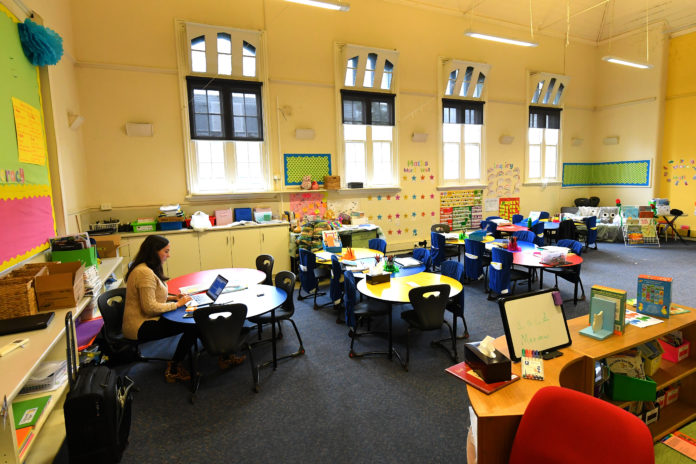 Victoria started school holidays a week early while parents can choose whether to send their children to school in other states. All states and territories are working towards reopening schools in term two.

Prime Minister Scott Morrison has said the medical expert advice is that it is safe to send your children to school.

This seems inconsistent with other strict quarantine measures the country is adopting to reduce the spread of COVID-19, the disease caused by coronavirus, termed SARS-CoV-2.

People are told not to leave the house if possible. All non-essential travel in and out of the country (and between some states) has been banned. Many businesses have closed and services, including open house inspections, have been banned. Even funerals are limited to no more than ten people.

Why then are our schools still open? And why are so many other countries closing their schools?

In short, strict quarantine measures have been shown to be more effective in reducing the spread of COVID-19 than closing schools. And many countries where schools have closed had community transmission for too long before putting in measures to prevent it.

But let’s look at it in more detail.

There is a lot we still don’t know about COVID-19. But we do know children appear to very rarely have serious disease and complications, compared to those in the older age groups like their parents and especially grandparents.

We have a lot of data from a number of countries (China, South Korea, Japan, Italy) where this pandemic has infected large numbers of people. The data show children have rarely (and in many countries never) died from the infection.

Read more: Worried about your child getting coronavirus? Here’s what you need to know

Even those under the age of 30 have rarely died from the disease. Children also appear to get infected at a much lower rate than those who are older – although we can only confirm that once we have rolled out large-scale testing.

Children can get infected. And both here and in other countries, children with infections have attended schools. But there have been no documented outbreaks in the schools infected children attended and the schools were shut and cleaned.

In Australia (as of March 25) we still have very low community transmission of this virus.

Some argue we haven’t detected community transmission because we are not testing enough. Yes, there will be some cases that might be missed – but not many. Australia has done more than 135,000 tests with only 1% of those tested showing positive results.

Australia has one of the highest per capita testing rates in the world and one of the lowest rates of positive diagnoses. And more importantly, current testing includes people who come to hospital with pneumonia, especially if they need to go to the intensive care unit.

If there was already widespread community spread we would be picking up these cases.

The cases we are seeing are overwhelmingly still in returned travellers and in their contacts. Hopefully by quarantining cases and high-risk people (close contacts and returned travellers) for infection, we will be able to limit any ongoing spread in the community.

Read more: COVID-19: what closing schools and childcare centres would mean for parents and casual staff

What we are seeing with our rapid increase in numbers is not an uncontrolled epidemic in Australia. It is more a reflection of what has been the uncontrolled community spread of the infection in places like the US and Italy. This is reflected in returned travellers who were in recent months part of those communities and who were or are now quarantined.

Australia’s situation is different to other countries

Most of Europe and the United States introduced widespread school closures. This is because they didn’t control community spread until very late, and the virus had already been circulating widely without them realising due to less or delayed testing . This is not the case for Australia where there is still little community spread.

There have not been extended national school closures in some countries where there has been good control with a reversal of the curve and fewer and fewer new cases, such as South Korea and Singapore.

These countries and others have had localised school closures in many areas. But this usually occurred where frequent community spread was detected. This may also be what is needed in some areas in Australia.

in the UK and US context, suppression will minimally require a combination of social distancing of the entire population (and especially for those over 70 years of age), home isolation of cases and household quarantine of their family members.

Most models have been done so far on the assumption the coronavirus spreads in a similar way to influenza (the normal flu). But this doesn’t appear the case. COVID-19 appears to cause many less infections in children than occurs with influenza. While we don’t know the exact infection rates in children, symptomatic infections appear to be much lower than what would be expected with influenza .

The Imperial College model assumes household contact rates for student families will increase by 50% during the time schools close. Contacts in the community increase by 25% during closure.

These increased community interactions, such as with grandparents and the community in general, may be why there are worrying findings from their model during the first three months with school closures.

Their model shows that if school closures themselves were our only intervention, that would only have a modest impact on decreasing the demand for hospital beds (14%) and be the least effective of all their modelled interventions.

But what about teachers?

Children do get infected but at a much lower rate than other age groups. Some teachers might be at risk, such as those over 60 years old with heart conditions. Those teachers should be be at home anyway and practising even more social distancing than the general population, along with all those over the age of 70 years old.

Higher risk groups should be decreasing their current contacts and trying to use the 2 meter distancing as well as not letting anyone unwell, such as those with a cold symptoms (including their children and grandchildren) visit.

Read more: No, Australia is not putting teachers in the coronavirus firing line. Their risk is very low

Closing schools will not likely decrease the spread of the virus by much, but the spread in our community will be associated with lots of potentially long term and detrimental outcomes on children’s education. It will also impact the ability of society to function and deliver essential and other important services. It may even increase deaths from COVID-19 based on some modelling.

– ref. Other countries are shutting schools – why does the Australian government say it’s safe to keep them open? – https://theconversation.com/other-countries-are-shutting-schools-why-does-the-australian-government-say-its-safe-to-keep-them-open-134538