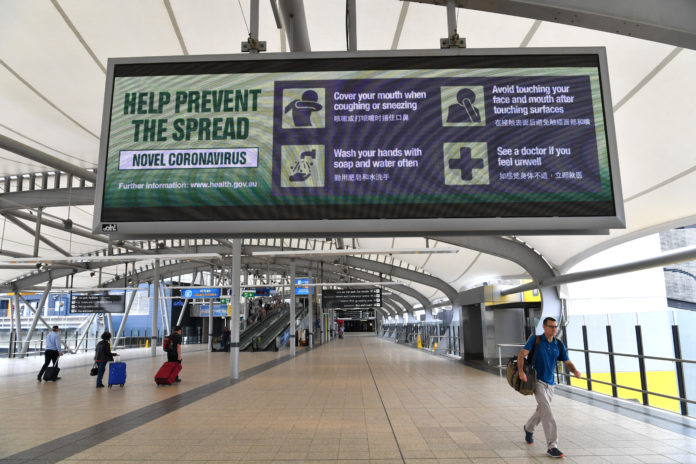 The Morrison government would like the “national cabinet” to mean individual states, notably NSW and Victoria, just stay in line – the line being what the Feds want.

Scott Morrison was clearly beyond irritated on Sunday when premiers Gladys Berejiklian and Daniel Andrews flagged shutdowns and indicated they disagreed with Canberra’s insistence on the need for children to be kept in school.

Not only had the premiers overshadowed the federal government’s $66 billion economic package. But they were arm twisting the Commonwealth, by announcing, pre-emptively, tougher positions.

In the event, on Sunday evening the national cabinet agreed to close down a range of premises to limit social gatherings, which seems to have satisfied the premiers on that front.

On schools, there was a compromise, which basically looks like a paper-over. Schools would stay open. But parents could pull their kids out – which on Monday Berejiklian was quick to advise. Andrews had already said he was bringing the holidays forward.

For weeks the Morrison government has been adamant about schools, arguing that children are at low risk of the virus, that out of school they’re more likely to infect other people, especially vulnerable grandparents, and that if parents have to stay home to mind them, it could mean a 30% reduction in the health workforce (this is its core concern).

Latterly, Morrison has stressed the undesirability of kids losing a year of schooling. Ensuring all children have adequate access to distance learning would be a near-impossible challenge for governments and parents.

Morrison stresses he’s driven by the medical advice. But how watertight is that?

Read more: View from The Hill: Entertainment venues closed in draconian measures to fight the virus

It is instructive to look in detail at the words from his advisers, the Australian Health Protection Principal Committee.

“AHPPC does not support closure of schools at this time,” it headed its Sunday advice.

“AHPPC does not support the closure of schools given the lack of evidence of significant disease in children and the lack of reported major disease spreading in schools,” it said.

“Furthermore, the closure of schools poses a major risk to children’s education, mental health and wellbeing, particularly those from low socioeconomic regions, where schools provide an important environment for nurturing and learning. The impact on the critical workforce and potential exposure of elderly relatives caring for children is also of significance.

“School closure would achieve some degree of additional social distancing but the evidence of its benefit at this stage is minimal. AHPPC views schools as an essential service and strongly supports keeping schools open. …

“AHPPC will continue to review developing evidence regarding the effect of the disease in children and the role of children in the transmission of the virus.

“School closures are likely to be more effective when approaching the peak of the epidemic and enforced for a shorter period.”

The advice is strong – and broader than strictly medical – but the qualifications are also significant. The judgement about non-closure is not absolute. The committee doesn’t support the closure “at this time”. (So much of the debate about how to handle the virus goes to the “when” question.) Closure would be more effective “when approaching the peak of the epidemic”. And the committee is still reviewing medical evidence.

This suggests a lot of room for different judgements.

“Experts” have come into their own in this crisis, which is how it should be, and a welcome change from the dissing of them in the “anti-elite” strand of modern politics.

But on this issue, the matter of expertise has been complicated.

We’ve seen the federal government strike positions, referencing its expert advice, then alter them, declaring the experts’ advice has changed. The change may be driven by new circumstances, or just a rethink.

Also, experts are divided – even if the advice from the AHPPC to the national cabinet is always said to be unanimous. (Does this really mean there is never any disagreement among these federal and state experts? Hardly.)

Credible experts have strongly contested the federal policy of a staged approach to the crisis, arguing for harder and faster action. Some of that advice has obviously been going to state governments.

Moreover, the debate is conducted against the unfortunate background of deep distrust of politicians, especially the federal ones (contrast the almost cult status acquired by the ABC’s long-time health journalist Norman Swan).

When official advice is contested by credible sources, and/or when governments have views at variance, the differences should not be suppressed. This is especially so given the states, rather than the Commonwealth, have the main formal powers in particular areas, and so a prime responsibility to their citizens.

Critics say dissent by states just confuses the public. Well, yes. But isn’t it better to have some confusion than not to hear the full range of views?

It’s like going to your doctor about a serious illness but refusing to get a second opinion because it might contradict the first.

The national cabinet is facilitating joint decisions and co-ordination, but that doesn’t mean unity at all costs would best serve the community.

– ref. View from The Hill: A contest of credible views should be seen as useful in a national crisis – https://theconversation.com/view-from-the-hill-a-contest-of-credible-views-should-be-seen-as-useful-in-a-national-crisis-134419