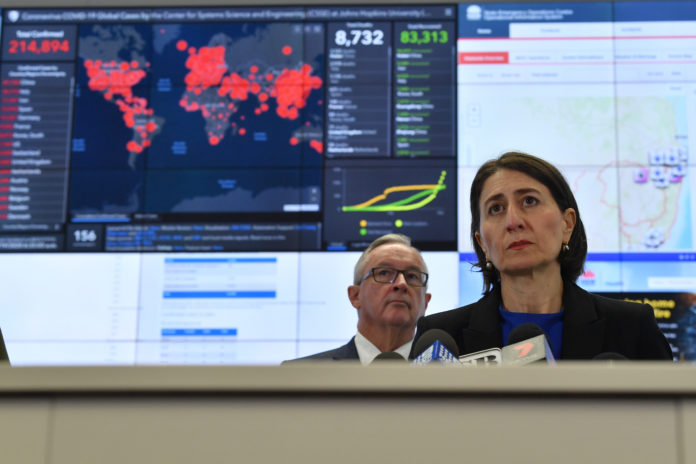 NSW and Victoria are shutting down non-essential services and activities over the next 48 hours, and the federal government has announced it will widen eligibility and increase income support as the coronavirus crisis escalates.

Schools would be open Monday but Berejiklian flagged she would have more to say about this on Monday morning.

Victorian premier Daniel Andrews announced a similar shutdown and is bringing forward school holidays to start Tuesday, with a decision on whether schools will reopen to be taken on medical advice.

Scott Morrison told Australians not to undertake unnecessary travel, including in the coming school holidays.

“All non-essential travel should be cancelled,” he said bluntly at a Sunday news conference where he unveiled a $66.1 billion second federal package.

South Australia is closing its border from 4 pm Tuesday, establishing 12 border crossings, and requiring travellers to sign a declaration to self-isolate for a fortnight. Tasmania and the Northern Territory have already acted on their borders.

The federal-state national cabinet’s meeting has been brought forward from Tuesday night to Sunday night, to discuss ever-toughening measures to handle the fast spread of the virus. But NSW and Victoria came out with their announcements ahead of that meeting.

The federal government’s second economic package, which has ten separate measures, will provide support for households – including those on income support, casual workers, sole traders, and retirees – and will also seek to prop up businesses with cash, loans and regulatory protection.

The government will temporarily widen eligibility for income support and give a new short term “coronavirus supplement” of $550 a fortnight.

The new supplement will go to existing and new recipients of the jobseeker payment and other benefits and be available to sole traders and casual workers who meet the income test.

It will be paid for six months and people will receive the full $550 on top of their ordinary payment. The cost will be $14.1 billion and up to 5000 extra staff will be employed to help deliver it.

Among other measures are a second one-off $750 payment to low income households and increased access to superannuation, as the government attempts to cushion people and businesses in a collapsing economy, which will go into a further tailspin with the shutdowns.

Even before the previously-announced $750 payment – to go out at the end of this month – is dispatched, the government has decided on the second payment, made from July 13.

About five million people will get this payment, half of them pensioners, at a cost of $4 billion.

The relaxation of superannuation arrangements will mean people in financial stress as a result of coronavirus will be able to access up to $10,000 of their super in each of this financial year and 2020-21. This will cost $1.2 billion. Minimum drawdown requirements are also being reduced.

The deeming rate used to assess income from financial assets for the pension income test is being reduced to reflect last week’s Reserve Bank interest rate cuts. This will benefit about 900,000 on income support and cost $876 million.

On the business side, the package also includes cash payments of up to $100,000 to small and medium-sized businesses and not-for-profit enterprises, with turnovers of less than $50 million, as well as a loan guarantee scheme for SMEs.

Among regulatory protections will be changes to bankruptcy rules. There will be a temporary increase in the threshold at which creditors can issue a statutory demand on a company and the time companies have to respond.

The government’s aim in its business support is to keep as many enterprises as possible afloat, with as many workers as possible still linked to them, so they can restart operations and reassemble their workforces after the crisis has passed.

Morrison said the government’s package focused on those “in the front line”, feeling “the first blows” of the economic impact of the virus. “We will be supercharging our safety net and supporting the most vulnerable to the impacts of the crisis, those who will feel those first blows.”

Federal and state governments are alarmed that many citizens are not taking warnings and advice seriously enough. After people swarmed to Bondi beach on Friday, a crackdown on numbers was imposed on Saturday.

Morrison was stern in his messaging, saying social distancing “is one of our most, if not our most, important weapon against the spread of the coronavirus”.

He said what had happened at Bondi “was not OK, and served as a message to federal and state leaders that too many Australians are not taking these issues seriously enough.

“So the measures that we will be considering tonight means that state premiers and chief ministers may have to take far more draconian measures to enforce social distancing, particularly in areas of outbreaks, than might otherwise be the case”.

He said what might be needed in a part of Sydney might not be necessary in rural NSW or Perth.