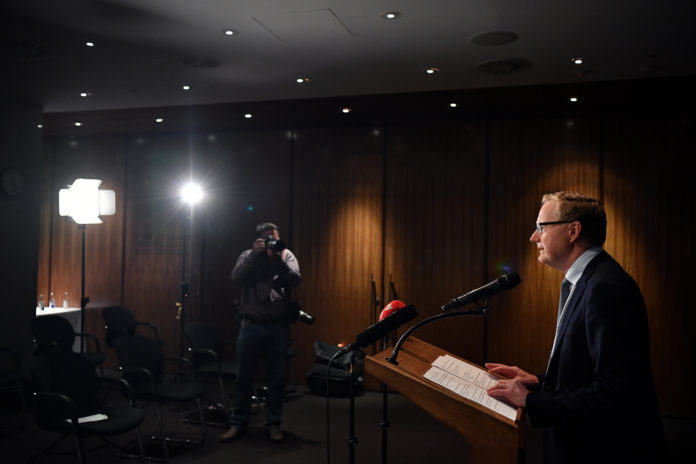 There’s new official lingo about tackling COVID-19’s economic challenge. A “bridge” is being built to take us to the other side of the crisis.

Meanwhile, the government is preparing a “cushion” for businesses and individuals who are already or soon will be its casualties.

Reserve Bank governor Philip Lowe came up with the bridge metaphor, Scott Morrison loves it and Treasurer Josh Frydenberg is using it.

The Reserve Bank on Thursday unveiled its bridge-building package. It cut the cash rate again, to 0.25%. It will also put a staggering $90 billion into the banking system, with the government injecting another $15 billion, to encourage low interest lending targeted at small and medium sized businesses.

But the bridge requires constructing a foundation of confidence, at a time when many businesses and consumers feel only fear.

In present circumstances, normal economic incentives have a much lesser effect. The market signals don’t work properly. If small businesses have their customers disappear and don’t expect them back any time soon, owners won’t be too interested in cheap loans.

Morrison has stressed Australia is not in shut down. Not officially. But out of a combination of alarm, caution and government measures to contain the virus’s spread, many activities have shut down and more do so every day.

Less than 90 minutes after the Reserve Bank produced its measures, Morrison announced the government was closing Australia’s border to foreigners, which will take effect late Friday.

As a health measure, this is sound, given the spread of the virus overseas and the extent to which arrivals have driven its early stage in Australia.

But it will be yet another brake on the economy, even though foreign arrivals have already fallen drastically.

Two days earlier Australians were told not to leave the country. Australia is in national self-isolation. And unlike for individuals, there is no set end point.

Qantas has stopped international flights and stood down 20,000 staff. It is hoping flexible leave arrangements will preserve jobs, but for how long?

A measure of the strange times is that Qantas is talking to Woolworths about some of its employees working there. The hoarding frenzy has become a job creator.

During this week, Morrison seemed on top of his messaging and the pioneering “national cabinet” of federal and state leaders was showing there is such a thing as “co-operative federalism” (albeit it has taken a national emergency to put it on display).

But federal and state governments and the community are a long way from having any certainty what measures – health or economic – might eventually be needed.

In circumstances unprecedented in living memory, difficult judgements are being made day by day that juggle health, the economy, and public sensibilities.

Read more: Our politicians are not fit to oversee the coronavirus response. It’s time they got out of the way

Devising rules for nursing homes pitted health against the humane. COVID-19 is lethal for the frail aged. But this week the government decided visits to these facilities should be restricted rather than stopped.

It was a trade off. A ban would have been safer in medical terms, but for residents a devastating isolation from family.

A ban could have carried another danger. Families are often watchdogs on how people in these institutions are being treated. Even after the royal commission’s indictment, constant eyes are needed.

The balance struck was sensible and has been generally accepted as such.

In contrast, the debate about schools has been fraught and is unfinished in the public mind. The government advanced several reasons for not closing them (at this stage). Few children are affected by the virus. If kids were not at school, many would be minded by grandparents in the most at-risk age group.

And shutting schools could mean a 30% hit on the health workforce.

The last is crucial in the government’s thinking. The health system will be under enormous pressure in the next few months, with no guarantees about how well it will cope, despite the reassuring words.

Rejecting the arguments of health officials and governments, certain schools have closed and some parents are removing their children from others.

If the schools are eventually closed under public pressure, it could be devastating for many students in their final year.

Clearly, the bad behaviour the crisis has triggered has not abated – the out-of-control supermarket scenes, and the abuse of shop staff, health workers at some testing places, and even teachers. Deputy chief medical officer Paul Kelly went to the length of highlighting the last by referencing the experience of his sister, a teacher.

Country town residents are angry at their shop shelves being stripped by non-locals.

On Thursday restrictions were announced for the dispensing and sale of drugs by pharmacies.

Is the binge buying just panic? There is a great deal of that, with people unreceptive to the message there would be plenty of supplies if everyone behaved normally.

Morrison had a strong message for hoarders: “stop it”.

But anecdotal evidence also suggests some of the “hoarding” may be for other reasons.

Home Affairs minister Peter Dutton (who is still quarantined with COVID-19) claims some people are “profiteering”; he declared the police are in pursuit of them.

“They’re hoarding, not for their own consumption, I think they’re either sending some of the products overseas or they’re selling it in a black market arrangement in Australia,” Dutton told 2GB.

The government maintains that on the health front it is keeping ahead of the curve, although critics says it has been tardy and should even now be doing more.

On the economic front, however, it knew it was behind the curve immediately after announcing last week’s $17.6 billion stimulus measures.

Now it is finishing its second package, which could dwarf the initial one; the combined measures will be legislated by the “mini” parliament early next week.

Last week the imperative was to keep growth going to try to avoid a recession; now the goal is being cast differently.

“What this second package will be designed to do is to cushion the blow for Australians, particularly those who have lost their jobs, but also for those small businesses who are facing this very, very difficult moment,” Frydenberg told the ABC on Thursday night.

Earlier, after the bank announced its measures, Lowe said in his speech, “At some point, the virus will be contained and our economy and our financial markets will recover”.

At what point and at what cost? That bridge could need to have a very long span.

– ref. Grattan on Friday: We are now a nation in self-isolation – https://theconversation.com/grattan-on-friday-we-are-now-a-nation-in-self-isolation-134167