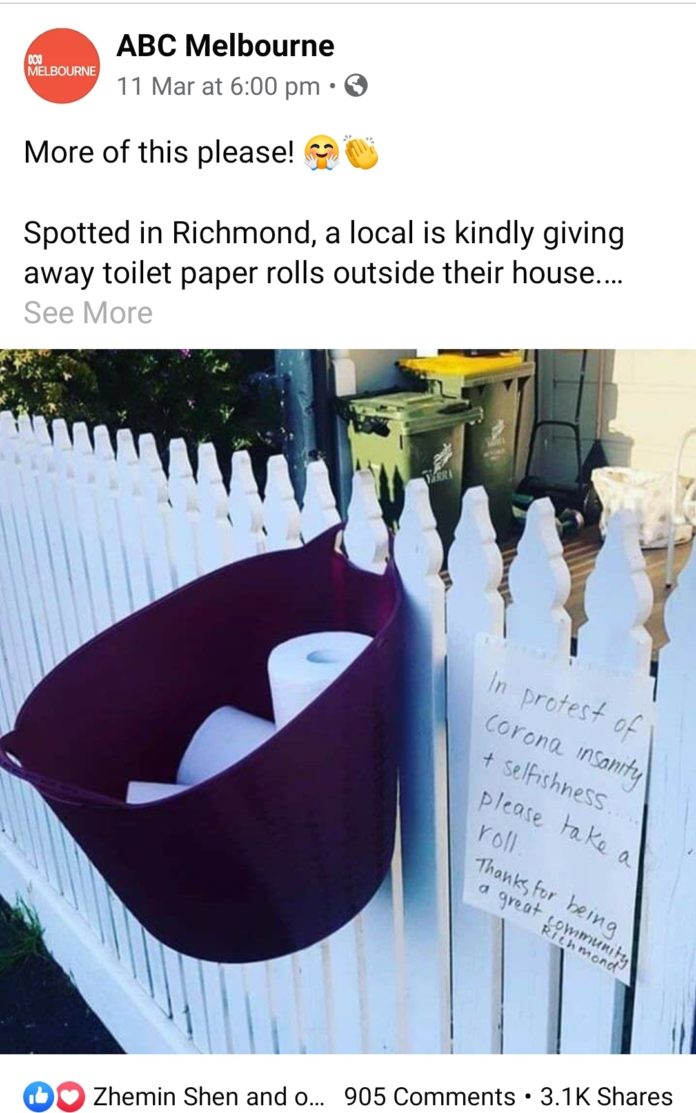 Source: The Conversation (Au and NZ) – By Gary Mortimer, Professor of Marketing and Consumer Behaviour, Queensland University of Technology

For every headline about panic buying, fighting and even arrests in supermarkets, we see other stories about communities and individuals rallying in support of each other. These interpersonal connections reveal our true humanity, especially in times of crisis.

The popular belief is that such times provoke “frenzied selfishness and brutal survival-of-the-fittest competition”. It’s the stuff of apocalyptic-genre movies, like Steven Soderbergh’s 2011 pandemic movie, Contagion, for which downloads have surged since January.

The classical view is that, faced with high stress or threats, a “fight or flight” response is hardwired into us. So people become aggressive in the supermarket, or avoid it altogether by going online.

However, recent research indicates that acute stress, lack of control, or feelings of vulnerability might actually lead to more cooperative and pro-social behaviour.

The notion of karma – to act in a way as you wish others to act – explains these behaviours. In 2012, University of Chicago researchers studied how people behaved when faced with outcomes beyond their personal control. The findings of their experiments supported the idea of “karmic investment” by showing that respondents who “desired an outcome over which they had little control”:

As the current crisis develops, we would expect to see more and more people sharing food and groceries, behaving more hospitably toward each other and becoming more aware of vulnerable others. Developing social connections in times of crisis may be necessary for our collective survival as a species.

When disaster brings out the best in us

Most people look to support one another in such times. From natural disasters, like bushfires, droughts and floods, to human-enacted events, such as mass shootings or food contamination, after the initial feelings of fear, anxiety and helplessness, people soon come together to help one another. An underlying sense of community and connection is the “social glue” that brings people together to work altruistically for the common good.

During the recent Australian bushfires, social media were flooded with images of notes pinned to doors inviting volunteer fire fighters to “help themselves to what ever is in the fridge”.

The “Buy from the Bush” campaign was launched to support small businesses in rural and regional areas struggling with the drought.

A year ago, after the mass shooting in Christchurch, New Zealand women began wearing headscarves in solidarity with Muslims.

Read more: Remembering my friend, and why there is no right way to mourn the Christchurch attacks

When unknown individuals began inserting needles into strawberries, the “Cut Them Up, Don’t Cut Them Out” campaign showed national consumer solidarity with the growers.

In response to panic buying of toilet paper, Nine journalist Jelisa Apps started a Facebook community site, Neighbourly Love, after an encounter with a distressed elderly shopper. Designed to bring community together, it’s a place to ask for help or provide help.

While we are often quick to criticise our big banks, airlines and retailers, in the past week many have stepped up to help vulnerable people. Companies like Commonwealth Bank, Woolworths and Telstra have said they plan to pay casual team members who are unable to come to work if they need to self-isolate or become ill with coronavirus.

The public is seeking comfort, security and predictability. Collective and altruistic movements by businesses, such as Woolworths’ partnership with Meals on Wheels to support older people and people with disabilities, help provide the community with a sense of agency and positive action.

These initiatives not only remind people of their own core values, but also appeal to the common values of their society. From a consumer psychology perspective, these programs are designed to connect society, appeal to the Australian sense of mateship and protect the greater good no matter our differences.

People are strongly influenced by group identity as a source of security in a crisis. Overarching values and goals bring people together.

Why we help one another in times of stress

We are being exposed to events that create anxiety, stress and even fear. Yet, in the process, we begin to empathise with those affected and imagine how we might cope in similar situations. Reaching out to people who are affected, either emotionally, physically or financially, can help us re-establish feelings of power and control.

As we see others behaving in the same “pro-social” way, we are reminded we live in a civilised society. This provides clarity and confidence and reduces our stress levels.

Engaging with others in a pro-social manner protects us from isolation and the idea that no one understands our pain. People do better physically, emotionally and psychologically when they connect with others in times of suffering. In 2012, researchers found that “connecting” in this way provides a sense of protection and safety.

Humans are social beings, designed to live cooperatively. Helping one another in a crisis is both a practical way to collect and share resources, and important for our own well-being.

Responding as a community

Altruism itself is “contagious”. When businesses, public figures and the general public begin to engage in goodwill, this powerfully bonds communities together.

The social capital generated though formal and informal networks can be used to raise awareness about causes and vulnerable members of society, and to mobilise community action. Collective action then reinforces a sense of common purpose and safety in numbers.

In the case of COVID-19, a well-connected and informed community can respond more effectively. This will enable us not only to survive the crisis as individuals, but also to support community recovery in the longer term.

– ref. How a time of panic buying could yet bring us together – https://theconversation.com/how-a-time-of-panic-buying-could-yet-bring-us-together-133753