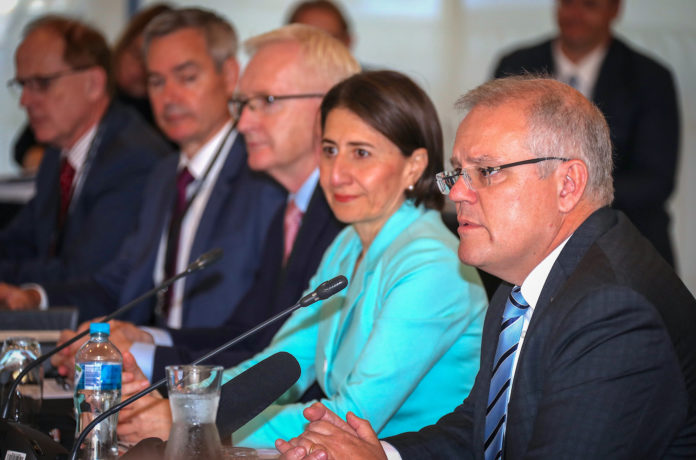 Holding daily press conferences to keep people alert but not alarmed is an inherently tricky business. But “fast, frank and frequent” have been the watchwords for Health Minister Greg Hunt and Chief Medical Officer Brendan Murphy in dealing with the coronavirus outbreak.

Since the earliest days of awareness of the virus, the pair’s updates, along with those of Prime Minister Scott Morrison, have generally struck that delicate balance between official insouciance and overreaction.

Inevitably, advice has evolved as new information has come to light about the virulence of COVID-19 and as governments abroad have embraced more extreme containment measures.

Early on, Australians were told there was little danger of human-to-human infection, and supposedly no risk at all of asymptomatic transfer.

As a novel pathogen, authoritative advice on COVID-19’s spread has been sparse. Meanwhile, on social media, unreliable information has flowed more freely. Public confusion has not been helped by an absence of clear advice on appropriate social behaviour, risk minimisation, what to do if feeling unwell, and infection modelling.

Neither has it been aided by politicians such as Barnaby Joyce who made a notable call for a “reality check” on breakfast television. He told the Seven network on March 9:

Look, it’s tragic, we’ve had over 3,000 deaths globally, but you’d need about 30 to 40 times that number to equate to the deaths from snake bites.

In the US, where the rate of testing is reported as significantly lower than in many other countries, President Donald Trump has variously suggested: that the normal influenza vaccine might help with COVID-19; that, as far as he knew, people did not die from the flu; and that as a result of its failure to contain the virus, all travel in people, trade and cargo from Europe would be banned.

Equity markets plunged more sharply on Thursday (US time) than on any single day since the Black Monday crash of 1987. The Australian Stock Exchange followed in this vein when it opened hours later.

While the word from Australian authorities has erred deliberately on the side of public reassurance, the dramatic Chinese decision to impose strict quarantining and order the construction of emergency hospitals spoke to something far more dangerous. Cue panic in the toilet-paper aisles of grocery stores.

As this pandemic has advanced, criticism has been growing that the government was no longer on the front foot as it had been with the first travel bans.

Meanwhile, much of the political/economic discussion has dwelt on the differences between the current situation as a “health crisis” and the 2008 Global Financial Crisis. Functionally, this is a distinction without a useful difference to most people inasmuch as the pandemic materially imperils economic growth and a putative budget surplus.

While obviously the root cause is different, many of the implications are notably familiar: collapsing confidence, evaporating consumer demand, broken supply chains, rising unemployment. It’s a secondary contagion of investment-chilling fear with severe economic and budgetary impacts.

Self-evidently, official messaging from Morrison has underscored a “don’t panic” mindset. Which is to say, the government has adopted a best-case stance on the viral spread in order to project confidence and thus protect the economic domain from the corrosive effects of runaway fear.

The clear aim has been to adjust policy only once unavoidable – such as the staged travel bans on entry from China, Iran, South Korea and Italy – while seeking to avoid a cliff-like drop-off in normal behaviour and commercial activity.

This has led to a dissonance between the life-as-normal health advice emanating from Canberra and the emergency footing onto which fiscal policy has now unashamedly been placed.

Even on economic policy, the government’s rhetoric has mostly conveyed a reluctance to be seen as overreacting.

This contrasts (perhaps deliberately) with the Rudd Labor government’s approach to the GFC in 2008. It conspicuously erred on the side of overreach to ensure it did not undershoot on stimulus.

Asked about the apparent gap between the emergency budgetary measures unveiled on Thursday and the public health advice advocating a business-as-usual approach to sporting events, travel, work and so on, Morrison said:

Well, it’s very simple. You follow the health advice. I’m going to the footy this weekend and I’m looking forward to it. And I’m sure many Australians would. And I encourage you to, unless you’re ill and unless there’s reason that with your own, if you’re in self-isolation for medical reasons or you’re actually ill, that I wouldn’t suggest you go.

By Friday afternoon, the distance between developments and the Morrison government’s static position on public gatherings was becoming unsustainable. That turned to untenable when Murphy advised that mass gatherings (more than 500 people) for sporting events should no longer be allowed. Morrison later announced that the government will be “advising against” such gatherings from Monday.

Labor, suppressing a perhaps understandable sense of schadenfreude after being punished for the “fiscal hangover” of its GFC response, has supported that position.

Opposition Leader Anthony Albanese told reporters on Thursday Labor would back the Coalition package, adding that he too intended to go the football on the weekend. But with community sentiment shifting underneath the government, there were signs of a breakdown in political bipartisanship emerging by Friday.

Former US president Barack Obama has also left little doubt as to his approach were he still in the White House, tweeting a graph showing the benefits of early decisive control.

Many sporting and other private organisations are coming to similar views.

This is making the absence of a centralised policy and a clear national message all the more glaring.