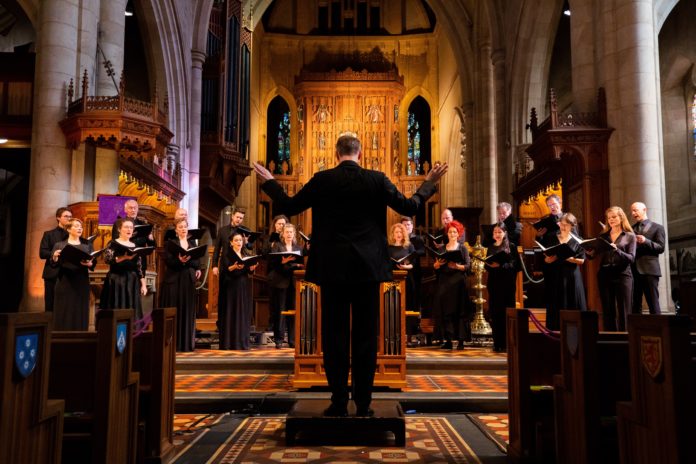 Source: The Conversation (Au and NZ) – By Melanie Walters, PhD candidate in music, University of Adelaide

One of the great aspects of international arts festivals is the opportunity to experience large-scale artistic projects that would otherwise be unfeasible in a smaller city like Adelaide.

A series of choral concerts may not seem like the same scale as an opulent opera or an interactive virtual reality experience. But 150 Psalms was a monumental event. It brought together four internationally acclaimed choirs to cover 500 years of musical terrain.

Each ensemble brought their own distinctive character and aesthetic. In 12 concerts at various venues – a Uniting church, Catholic and Anglican cathedrals, an Orthodox synagogue – all 150 psalms were performed.

Visser conceived the project as a reflection of the world today, connecting the themes of the psalms with contemporary events.

Concepts of joy, fear, loss and insecurity running through the texts seem as relevant today as they were when the psalms were written.

Accompanying the performances was a photographic exhibition drawn from The Australian’s archives. These photos highlight the relationship between contemporary events and the psalms: powerful images contrasting war, protests and vigils against artistic and sporting achievement, children playing and religious celebration.

How lovely is your dwelling place

The Netherlands Chamber Choir had the most traditional sound, with warm, blended timbres.

The Tallis Scholars and their historically informed performance had exceptional precision and clarity with nuanced phrasing.

The Song Company were animated and communicative.

Renaissance music made up a large percentage of the concert programs. There were well-known names such as Josquin and Palestrina alongside lesser-known composers including France’s Philibert Jambe de Fer.

Short, simple settings, such as Lodovico da Viadana’s Exultate iusti with its homophonic textures and call-and-response passages, beautifully contrasted with the intricate polyphony of works like Ferdinando di Lasso’s Sperate in Domino.

In the selected baroque works, alongside the predictable inclusion of works by Bach and Purcell was composer and Benedictine nun Chiara Margarita Cozzolani. Her Dixit Dominus was one of the more interesting early works, with its contrasting textures and shifts between major and minor modes.

Among the many highlights across the performances was French-Lebanese composer Zad Moultaka’s setting of Psalm 60 in Sakata.

Violent imagery permeates the text of Psalm 60, with references to earthquakes and the futility of man’s salvation. Moultaka conveys this harshness through effects such as chest beating, ululation and other extended vocal techniques, while slowly shifting drones maintain a sense of unease throughout the setting.

Most of the psalms were either a capella or with organ accompaniment. James MacMillan’s A New Song brought the organ to the fore, with impressively clear articulation in the repeated scalic passages by organist Anthony Hunt.

There was an impressive number of world premieres across the programs. New works by Australian and New Zealand-based composers replaced some of the settings in the original Utrecht staging.

I walk in the midst of trouble

Dutch theologian Gerard Swüste divided the psalms into 12 themes, such as abandonment, trust and suffering, with speakers contextualising each performance.

These themes weren’t always successful. The inclusion of Carlo Gesualdo – the late Renaissance composer who brutally murdered his wife and her lover – in a program called “safety” seemed ill-conceived.

But, for the final concert, Celebration of Life, the unresolved dissonance at the end of Francis Poulenc’s Exultate Deo seemed fitting after Kerry O’Brien spoke to tumultuous current events. The lack of harmonic resolution at the end of an otherwise jubilant musical setting felt like an unanswered question, leaving us to consider how to move forward in the chaos of today.

The musical answer given to this question was Thomas Tallis’s Spem in Alium. All four ensembles came together to perform the glorious 40-voiced work.

Although the text of this work is drawn from the Book of Judith, rather than psalms, it summed up the celebratory nature of many of the psalms. The beauty of the music, along with the text’s exhortation to hope, was one of the most moving moments in the entire program.