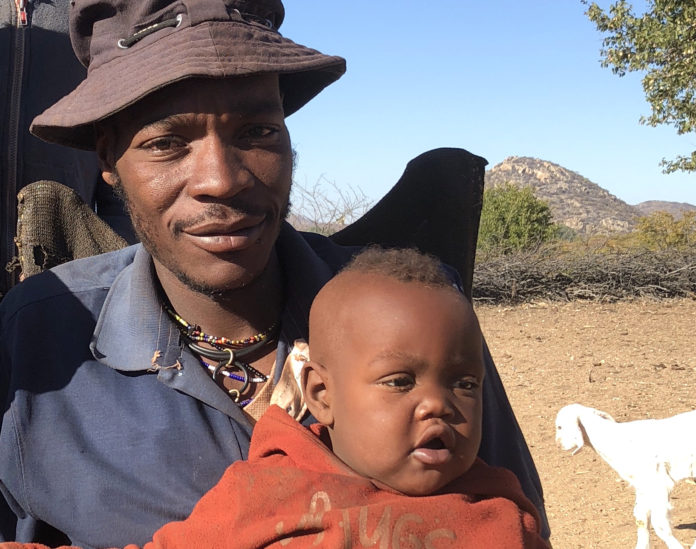 Compared with our closest relatives, the common chimpanzee and the bonobo, humans are pretty good at focusing exclusively on one mate at a time.

Just how exclusively, however, is the subject of endless tabloid gossip, culture-war sabre-rattling, and scientific debate. The answer seemed to be that most people are exclusive most of the time, but new evidence has thrown the question wide open again.

Recent research has revealed that among the Himba of northern Namibia, nearly half of all children were fathered by someone other than their mother’s husband. This is by far the highest rate of “extra-pair paternity” ever documented by reliable research, but for the Himba it is an accepted part of life.

What’s more, the phenomenon doesn’t seem to cause serious problems for the Himba, thanks to their particular social norms. For men, these include a scrupulous sense that biological and non-biological children deserve equal treatment.

Read more: What are the chances that your dad isn’t your father?

How common is extra-pair paternity?

Some years ago, I looked at the oft-quoted estimates that between 9% and 30% of children are sired by somebody other than the guy who thinks he is the father.

At that time, the best-designed genetic studies showed we could put the sensationalist estimates of 10-30% aside; the best studies suggested extra-pair paternity rates between 1% and 3%. That number gels with evidence gathered in the intervening years from studies of historic rates of extra-pair paternity in Belgium and South Africa, and contemporary estimates from the traditional Dogon society in Mali.

So you can imagine the surprise in the scientific community when a paper in Science Advances published, using a very thorough protocol, an estimate of 48% extra-pair paternity among the Himba. More than that, 70% of married couples with children had at least one child sired by a man other than the mother’s husband.

The Himba are pastoralists who live in the arid plains of northwestern Namibia. UCLA anthropologist Brooke Scelza, who led this new research, has travelled regularly to Namibia for more than a decade and learned much about Himba culture, marriage and parenting.

Himba parents arrange marriages for their children, and the groom’s family pays a bride price of a small number of livestock. But many, perhaps most, married adults have extramarital relationships.

These are not furtive affairs, infused with stigma and the threat of destructive jealousy. Himba call children conceived in these relationships “omoka”, but their mother’s husband is still considered their father in all important social ways.

The relatively relaxed sexuality of the Himba is related to how they make their living. A husband often spends long periods away from home, seeking out grazing and water for his cattle, sheep, and goats. During these periods of separation in particular, both wives and husbands consort with other lovers.

Mothers and fathers are both very good at discerning which children are omoka, getting it right for 73% of children. Their errors in attribution were much more likely to be false positives, that is to say mistakenly believing that an omoka child is a genetic descendent.

Where our promiscuous ancestors – the ones we shares with chimps and bonobos – weren’t much chop as fathers, humans have evolved both the tools to focus on a limited number of mates and the capacity to be excellent dads.

Questions of spousal exclusivity expose all sorts of insecurities, particularly in societies with high fidelity and low rates of extra-pair paternity, like the ones most readers of The Conversation inhabit. These are the places where a child who does not bear their father’s DNA is often seen as the product of “cuckoldry” or “cheating”. Such children experience dramatically higher risks of neglect and violence.

Individual men invest more in their wives and children when they are confident they are the children’s genetic father. The more women depend on men’s investments, the more they lose if the relationship breaks down. As a result, in couples where the man’s economic contribution is large, both parties are likely to hold strong anti-promiscuity views.

A separate study of 11 societies led by Scelza found societies where men spend a lot of time and effort caring for children also tend to be places where women and men react with strong jealousy to scenarios depicting emotional and sexual infidelity.

Despite their relatively low levels of jealousy, Himba dads fall in the middle of those 11 societies on the paternal care scale. They don’t hold, groom, or play with their small children very much. But they do provide indirect care, ensuring the children have food, helping them receive an education, giving them livestock, and paying “bride price” for their sons.

When a Himba man dies, he passes most of his wealth, in the form of cattle, not to his own or his wife’s sons, but to those of his sister. This is not an unusual custom among pastoralist societies. It makes solid Darwinian sense for Himba fathers, given the likelihood of extra-pair paternity.

Himba parenting seems to work, despite the high rates of extra-pair paternity, because of these norms. There is a strong sense that the social father of a child plays an important role irrespective of the child’s genetic paternity.

Children, regardless of their paternity, are useful and important members of a household. Himba children perform useful work around the home, and older boys help care for livestock. Beyond that, being a generous father who is fair to his omoka and genetic children alike, earns a man prestige. Men are especially likely to treat their children equally in the most visible forms of parental investment, like bride price.

What of human monogamy?

The new papers about Himba parenting challenge the view that humans are, if not monogamous, then mostly “monogamish”. Himba extramarital relationships are too common and too prominent to conform to our idea of furtive, opportunistic transgressions.

Omoka are not the issue of cuckoldry, but rather a different kind of socially acceptable mating arrangement. More than that, Himba fathers don’t drop their bundle at the first hint that a child doesn’t have “their eyes”. They stick around, and mostly treat those kids the same as everybody else.

– ref. The deep evolutionary links between monogamy and fatherhood are more complicated than we thought – https://theconversation.com/the-deep-evolutionary-links-between-monogamy-and-fatherhood-are-more-complicated-than-we-thought-132660