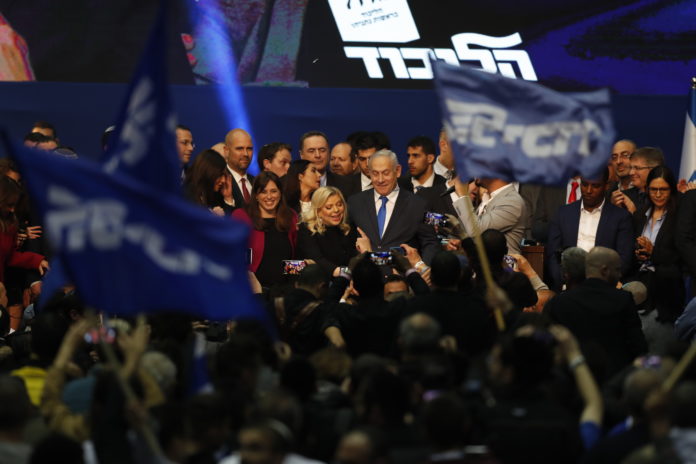 Benjamin Netanyahu may well have survived to fight another day as Israel’s prime minister after a third knife-edge election in less than a year.

However, it could be days, or even weeks, before a new Israeli government emerges, after the horse-trading that has become standard after decades of close-run elections.

With more than 90% of the vote in the March 2 election counted, Netanyahu’s nationalist Likud party and its allies can probably muster 59 seats in the 120-member Knesset, two short of a majority.

Read more: Trump’s Middle East ‘vision’ is a disaster that will only make things worse

The main opposition Blue and White party of ex-general Benny Gantz will have trouble cobbling together a Knesset majority of the centre and left, given Gantz has ruled out a coalition with the Arab List.

Gantz’s party slipped at the election from its showing in the previous encounters over the past year, in April and September. This will weaken his hold on his leadership and diminish his bargaining power in a coalition-building process.

The Arab List represents Israel’s Arab population. This accounts for 20% of the country’s people, or 17% of eligible voters.

The Arab List is set to improve its position in the Knesset from 13 to possibly 14 or 15 quotas. This is a significant advance.

The wild card in all of this is the position of the staunchly secularist Yisrael Beiteinu party of Russian émigré Avigdor Lieberman, whose list appears to have secured up to seven quotas.

This places Lieberman, a former Netanyahu ally turned antagonist, in a potentially powerful king-making position. Lieberman has declared he will not serve in a government populated by the more extreme Orthodox Jewish parties. These political alignments shun military service.

But if there is a lesson in Israel’s politics in this latest fractious stage it is that no constellation of political forces can be taken for granted. Election fatigue after three polls in 12 months may well drive various players towards some sort of accommodation.

Israeli support for the status quo in the person of Netanyahu, who is under indictment on criminal charges, has signalled exasperation with continuing political paralysis. Gantz and his centrist party did not made a compelling case for change.

Lieberman’s support for any coalition that might eventually emerge could be described as fluid, depending on the allocation of the spoils of victory and his own resolute opposition to partnership with parties on the extremities of the religious right.

All this raises the possibility of a national unity coalition that would involve Natanyahu in partnership with Gantz. The two might rotate the premiership. This sort of arrangement has been tried before with varying degrees of success.

It was significant that on election night, after it became clear Netanyahu was likely to survive and Gantz had slipped, the two leaders refrained from making negative references to each other.

On security issues, they are not far apart, in any case.

The point of all this is that Israel has entered a period during which the playing cards will be shuffled in an attempt to come up with the sort of hand that enables relatively stable government.

Complicating calculations about the next stage is the fact that Netanyahu is due in court on March 17 to face serious charges of bribery, fraud and breach of trust.

His allies in the Knesset have said they will seek to pass a law that would preclude, or freeze, the prosecution of any sitting prime minister.

That manoeuvre is given little prospect of success.

What may evolve is that judges agree to delay hearings for a short period, pending attempts to form a government. In any case, court proceedings may well drag on for a year or more.

In the meantime, Netanyahu would continue in his role. Remarkably, criminal charges do not preclude such a continuation in office.

On the other hand, the uncertainties a criminal trial engenders would be potentially destabilising politically.

In the end, the willingness of enough Israelis to look the other way when it comes to charges of criminality appears to have enabled Netanyahu to survive as prime minister.

This observation comes with the caveat that, in political terms, not much can be taken for granted in Israel.

Typical, perhaps, of attitudes towards the case against Israel’s leader were these remarks in The Guardian by a small businesswoman in Jerusalem:

I don’t mind if he eats takeaway food in boxes covered with diamonds. Look what is happening around us.

One of the charges against Netanyahu is that he improperly used public funds to feed himself and his family.

From an international perspective, the Israeli election result is likely to pose a significant dilemma. That is if Netanyahu presses on with his threats to annex settlement blocs in the West Bank and the Jordan Valley.

Most countries regard these settlements on land occupied after the 1967 Six-Day War as illegal under international law.

This is where a potential Netanyahu victory aligns itself with a possible Trump re-election.

No American president has been as accommodating to Israel’s nationalist impulses. No US administration has been as antagonistic to Palestinian aspirations.

Washington yielded to long-standing Israeli pressure to move its embassy to Jerusalem and at the same time reverse US policy that regarded settlements as a breach of international law.

If Netanyahu is confirmed as Israel’s prime minister for another term and Trump is re-elected, prospects for an accommodation between Israelis and Palestinians will likely become more distant.