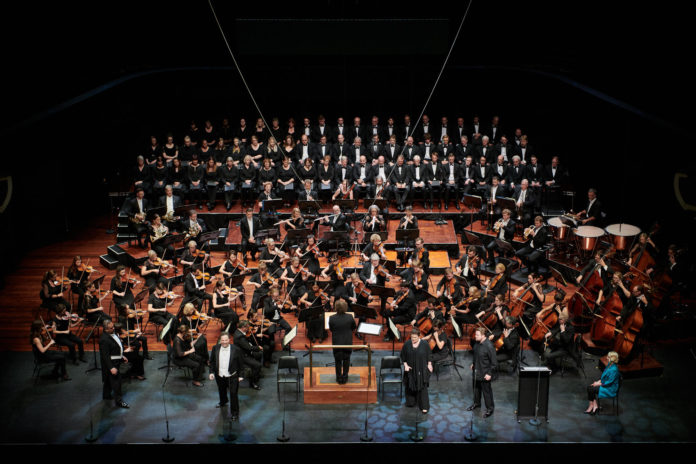 There’s something disconcertingly compartmentalised about opera – particularly opera in concert. The audience stays lit throughout, and the chorus sit behind the orchestra looking at us looking at them.

Then there’s the surtitles, the amplification of the voices that separates them from their source, the position of the singers across the front of the orchestra, the varying degrees to which they enact the experience of their characters, and the fact they’re all dressed in contemporary clothes not connected to their characters.

Add to this there is something out of time about opera. But maybe that’s just me, maybe it’s just out of my time.

When the narrator (Eryn Jean Norvill) enters and says something like “Imagine a world entirely unlike ours, or maybe it isn’t so different…” the shackles of my preconceptions and discombobulation start to soften. Equal parts storyteller and commentator, Norvill provides the perfect bridge for us to cross over into Fidelio’s world.

As she continues, her words make us imagine a prison, and a prison of “misdirected desires”; a garden and a garden of freedom. Themes of love, imprisonment and freedom run through this work.

Read more: Ahead of his time, Beethoven still inspires

Fidelio is Beethoven’s only opera. Presented here in concert rather than production, WASO’s principal conductor, Asher Fisch, suggested the addition of narrated text to provide a throughline for the audience. Using description and commentary, writer Alison Croggon touches on the tangle of love (both misplaced and perfectly placed) and the themes of corruption and political persecution underpinning this story.

A bridge between old and new

The narration provides hooks for the audience to grasp, and historical and contemporary context to remind us how these themes remain as pertinent as ever.

Croggon tracks Beethoven’s diminishing faith in Napoleon to the way he redeveloped the opera from its poorly received premiere in 1805 to the final version, which was rapturously received in 1814. Then, she writes of illegally detained prisoners, “everywhere, even today, even in this country”, and the work seems to bristle with contemporary, cultural relevance.

Croggan highlights the ways the powerful punish those who tell the truth, and the undeniable truth, “not every wall is visible”.

Standing behind a lectern with script in view, the audience views the narrator differently from the singers who are wholly immersed in the physical act of performing these songs. This divide creates a striking contrast in embodiment.

There are many highlights throughout the evening. The quartet in act one, between Leonore (disguised as the boy Fidelio) (Christiane Libor), Marzelline (Felicitas Fuchs), Jaquino (Andrew Goodwin) and Rocco (Jonathan Lemalu), starts as a delicate interplay between Marzelline expressing her love for Fidelio and Leonore her fear of exposure. It builds into a complex overlap as the other characters join.

Read more: Performing Beethoven – what it feels like to embody a master on today’s stage

The thrilling complexity of juggling four concurrent points of view makes this quartet an early turning point where all the diverse elements seem to come together. The form settles. Or perhaps I just settle into the form.

Warwick Fyfe is impassioned as the evil prison governor, joined by the 40-strong male members of the WASO chorus in his rousing introduction. His is a visceral performance. From the thump of his footsteps as he enters the stage, Fyfe’s performance supersedes the concert form, giving a peek into how this character could be played in a full production.

When we return from interval, the house lights are slightly dimmed to suggest Leonore’s descent into the underground prison to rescue her husband Florestan (Tomislav Mužek), falsely imprisoned for political reasons. We first see Florestan seated, leaning forward, hands crossed in his lap. This simple staging choice helps encapsulate his suffering.

In the program, Croggan says one of the things that drew her to Fidelio was here was an opera in which the woman doesn’t die. She is, in fact, the hero who rescues her husband. Her reveal as his wife Leonore rather than Fidelio is splendidly performed by Libor, culminating in a beautifully performed duet with Florestan.

To paraphrase Croggan’s narration, “Leonora’s other name is Hope.” This is how the evening ends, full of rousing hope and joy. The crowd hisses with glee at the curtain call of the villain and yells bravos and bravas for everyone else.

The sense of triumph in the room is infectious. Beethoven’s music and Croggan’s images – “the garden is always there waiting for us” – resound as we walk away into the night.