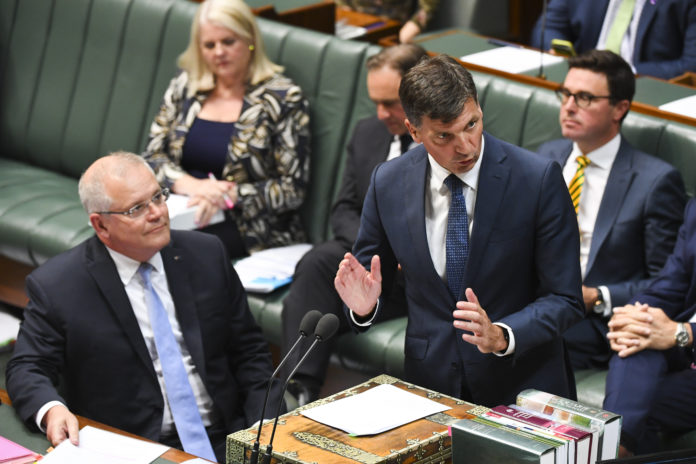 The government would be looking for the private sector to put in four or five times as much as it invests in research and development of particular technologies to reduce emissions, Energy Minister Angus Taylor says.

In a speech on Friday, released in part ahead of delivery, Taylor lays the groundwork for the “technology investment roadmap” to be released soon.

The “roadmap” will provide the basis for the government’s work towards the next international climate change conference, in Glasgow late this year.

The government is resisting pressure to embrace the widely supported target of a carbon neutral economy by 2050, but focusing on a “strategy”.

“The Australian government will take a technology-based long-term emissions reduction strategy to Glasgow later this year. We want to lead the world on this.

“Our strategy will be based on a series of detailed pieces of work that we will complete over the rest of this year,” Taylor says.

“That work must look at our investments, it must evaluate the technology and then encourage prospective technologies to full commerciality and deployment without massive government subsidies.”

Taylor says under the roadmap, progress will be measured in two ways.

Economic goals will be set for technologies, so a clear signal can be given for when the technology is commercial.

“The goal for each technology is to approach economic parity or better, which means the shift to lower emissions is zero cost or low cost,” he says.

The other measurement would be on investment.

Government investment is important as a market signal and to give a lead, Taylor says. But success requires tracking “how much private-sector and other investment in R and D and early deployment follows our own investment.

“To measure the success of the overall portfolio I think we should be aiming for a four or five time multiplier.

“That is, for every dollar invested I want to see four or five dollars from the private sector following over the course of our investments.

“An important indicator of the success of a technology is the private sector and state government interest”.

Taylor says the government has already invested more than $10.4 billion in hundreds of clean technology projects with a value of $35 billion.

“But we are coming to an end of the value of these investments.

“Wind and solar are economic as a source of pure energy at least. And the Government should not crowd out private sector investment.

“We must move our investments to the next challenges.”