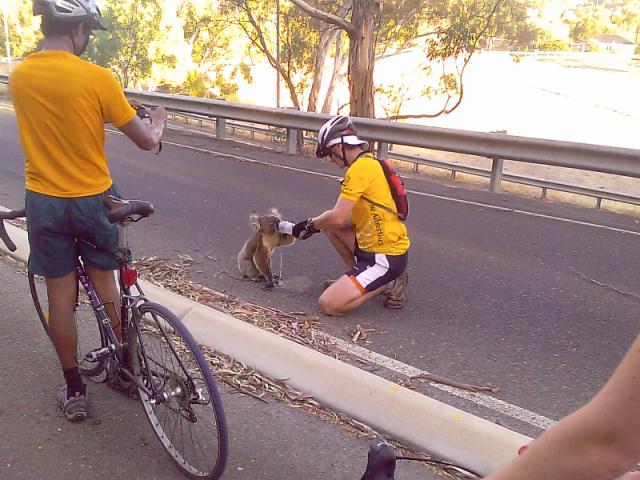 Since July last year, bushfires have burned more than 7.7 million hectares of southeast Australia, putting many threatened species at increased risk of extinction.

Now that fires have been extinguished in some areas, surviving wildlife face other challenges, such as a lack of food, clean water and shelter, and more exposure to invasive predators.

Read more: These plants and animals are now flourishing as life creeps back after bushfires

Australians have helped raise millions of dollars to support Australia’s imperilled wildlife, such as to set up triage centres and evacuate threatened species like eastern bristlebirds and Macquarie perch.

But beyond the vital role of providing financial support, here are a few simple things individuals can do – and avoid – to help our native wildlife recover.

Animals need fresh water, but not from a bottle

Photos of well-meaning people offering water from bottles to animals, especially thirsty koalas, often go viral online. But this is not a safe way to help koalas.

Animals must be allowed to drink water themselves, rather than us pouring water into their mouths. Animals, such as koalas, can’t drink quickly and poured water can fill their lungs, leading to potentially fatal aspiration pneumonia.

Still, providing safe, fresh drinking water is one crucial and practical way we can help them as summer grinds on.

This is particularly important since recent storms have washed ash, sediment and chemicals from burnt infrastructure into waterways, contaminating many catchments.

Water should be stationed at ground level, in a shaded location safe from predators, and in trees for birds and tree-dwelling species like possums, gliders and koalas. Check out DIY guides for building drinking fountains, or “watering pods”, for wildlife.

Sticks and rocks should be placed in the water to allow small species, such as reptiles, to climb out if they fall in. Water must be checked and changed regularly to ensure hygiene and avoid the spread of disease. And pets must be kept away from these locations (especially cats).

What to do if you spot injured wildlife by the road

Authorities are searching the fire grounds for injured animals, and the public is reminded to avoid these areas until they’re confirmed as safe to enter.

But if you happen upon an injured survivor, what should you do?

First of all, call government agencies or trained wildlife rescuers, who can assist any injured wildlife.

Many animals may be in pain and frightened and some, including kangaroos, koalas and wombats, are potentially dangerous if approached. In urgent cases, such as when an animal is in obvious distress or has clear injuries, some animals can be carefully caught and wrapped in a towel, then placed in a well-ventilated, dark and secure box for quiet transport to wildlife veterinary hospitals for care.

Sadly, many animals are hit by cars during fires when they’re disoriented and panicked, and so it’s important to slow down in such areas.

You can also check animals found by roads for injuries and surviving young in pouches, and call authorities to assist. But always be careful of traffic when attending to animals on roadsides, and help other drivers be aware of you by putting hazard lights on and wearing bright clothes.

With so much vegetation burned away, supplementary feeding has gained attention following fires in New South Wales, Victoria and South Australia.

But feeding wildlife without expert advice and legal approval can do more harm than good.

Feeding inappropriate foods like processed foods, over-feeding, providing unhygienic foods or food stations, and attracting predators to food stations, can all be fatal for native wildlife.

Even some foods suggested online, such as bait balls (peanut butter mixes), can cause gastrointestinal issues for wildlife, potentially killing them. Similar issues can arise if wildlife are given some types of hay, vegetables, seeds, and fruits.

Supplementary feeding isn’t advised unless habitat and sources of food have been completely destroyed, and is only appropriate as a short-term emergency intervention until natural resources recover.

But leave it up to the experts and government agencies, which provide nutritionally suitable, specially developed and monitored food in extreme cases.

Somewhere to run and hide

In some cases, fire may mean native animals are more prone to predators killing and eating them. And, depending on the habitat, it may take months or even years for plants and animals’ homes to recover sufficiently to provide safety once again.

However, new approaches – such as building artificial shelters out of fencing wire and shade cloth – may help to buy species time, keeping small mammals, reptiles and other potential prey safe from hungry mouths. This could occur both on private and public land.

Caring for wildlife after fires, whether they’re injured or have lost their homes, is a marathon, not a sprint. And given the scale of these fires, our wild neighbours need our increased support.

Often, the most helpful thing people can do is raise and donate funds to organisations, including Zoos Victoria and the Ecological Society of Australia.

Read more: To save these threatened seahorses, we built them 5-star underwater hotels

Some wildife species, such as bristlebirds, corroboree frogs, and mountain pygmy-possums, are being pushed to the brink of extinction and may need long-term captive breeding and release programs, or investment in active management of wild populations (such as the newly constructed feral predator-free area for Kangaroo Island dunnarts).

We can all help to make a difference and protect our remarkable and unique wildlife that so desperately needs our help.

– ref. How you can help – not harm – wild animals recovering from bushfires – https://theconversation.com/how-you-can-help-not-harm-wild-animals-recovering-from-bushfires-131385